The combination of high-density small cell sites and low-latency applications makes 5G different. One of the most critical differences is in how routing will expand and become integrated with the transport network. 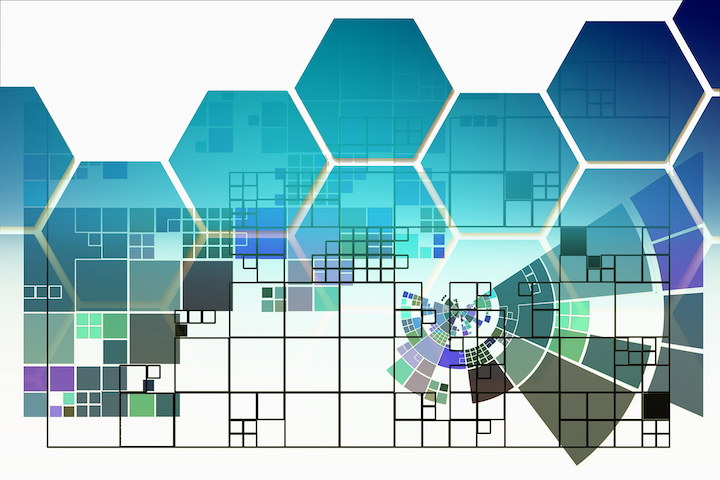 Wireless has been about connecting people and their devices. In the U.S., there are more devices connected than there are people, with 400 million mobile devices according to CTIA. Consumers have embraced the various unlimited plans. According to an NPD study, each month the average U.S. smartphone user uses 31.4 GB of data across Wi-Fi and cellular. However, there is very limited revenue growth potential in this market, which is why forecasts have wireless service provider revenue growth slowing to 1% per year.

5G will enable a new set of applications and represents a significant departure from 4G. It is designed to accommodate low-bandwidth applications like sensors in Internet of Things (IoT) as well as high-bandwidth video streaming. We will see it used in everything from smart cities to industry to connected cars. 5G represents a critical revenue opportunity from adding connections of things for enterprises. What stands out is that so many of these applications require low latency, which drives network design.

5G standards were developed expressly to deliver these applications by defining the technology for major use case classes: enhanced mobile broadband (eMBB), mobile IoT, and ultra-reliable low-latency communications (URLLC). Classes or services and network slicing are means to ensure performance for these use cases across the network. Given the limitations of spectrum, the range for a 5G cell site will be around 500 m, much smaller than the 2 to 3 km in 4G. As a result, the cell sites will be much smaller physically and there will have to be many more of them.

This combination of high-density small cell sites and low-latency applications makes 5G different. Networks will have to change to deliver these services. For example, computing resources will have to move much closer to the user as transporting traffic to distant cloud data centers will present a latency problem. Edge computing standards like MEC are a way to address this while also offering an additional revenue opportunity. These changes are already having a significant impact on how transport networks are deployed. One of the most critical differences is in how routing will expand and become integrated with the transport network.

Legacy to next generation

Traditionally, the IP service edge was at the provider’s point of presence (PoP). These PoPs number from the tens to the hundreds of physical locations for a given provider. The PoP is home to the routers that drive the service intelligence and connect to the core network. Big edge routers are the rule and service providers scale up these appliances as the demand grows for more connectivity. Mobile backhaul terminates on these devices and was one of the drivers of this demand.

Legacy routers are typically tightly integrated appliances. The control plane software that determines the best route runs on a centralized processing module that has a CPU and memory. The data plane processing of packets occurs on IO modules. These routers were optimized for high port density, which helped keep the cost per port as low as possible for this type of architecture. However, the size and absolute cost of these devices is quite large, which makes it costly to use them unless the port count is high. Moreover, the control plane processing resources of CPU and memory did not change as the port count increased. The software is designed to run on this scale of device.

There is already a need to push the IP service edge further out as illustrated by trends that are in full swing and show much of what we can expect in 5G transport. Radio access network (RAN) disaggregation and virtualization go hand in hand and are already in use in 4G networks. Cloud or centralized RAN (C-RAN) moves baseband units (BBUs) from the cell tower to a “BBU Hotel” where service providers run a pool of BBUs, typically as software virtual network functions (VNFs).

This approach drives an immediate change in transport. This type of cell-site connectivity is known as crosshaul and comprises two parts. Fronthaul, using a standard like the Common Public Radio Interface (CPRI), is the transport network connecting remote radio units (RRUs) at the cell site to the centralized pool of BBUs. RRUs remain at the towers, generally kilometers to tens of kilometers away. The BBU pool is typically at a central office (CO). Routing is needed at this midpoint to provide a compete transport solution that connects the various BBU VNFs to the backhaul portion that transports the IP traffic to the PoP. 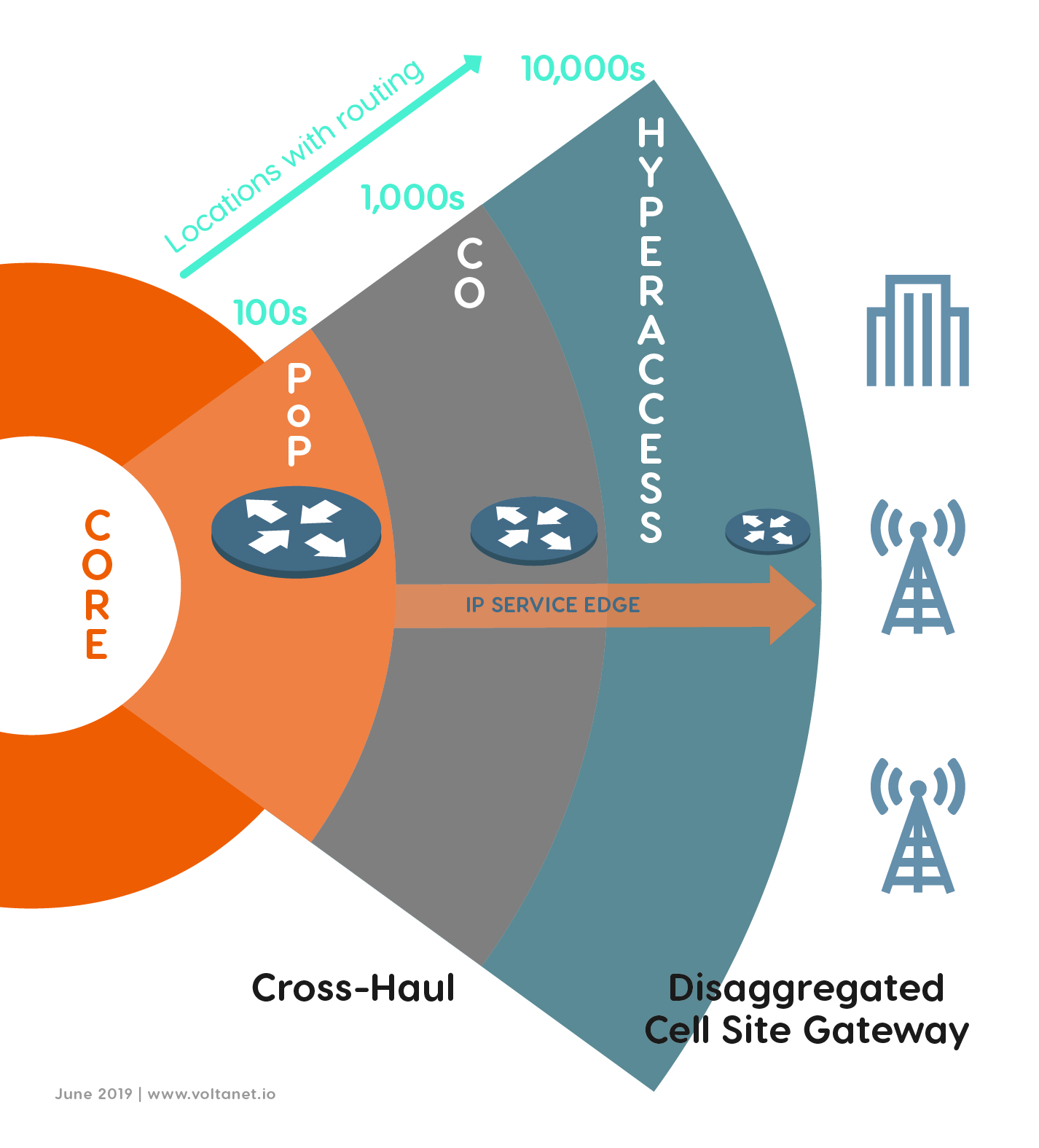 Routing will become ubiquitous in 5G RANs, creating a need for efficient provision of such functions.

In contrast to PoPs, there are thousands of COs, which represents an order-of-magnitude increase in locations that need a router. These are much closer to the user and the scale of the port requirements at the CO level are much lower. Thus, the increase in locations has a parallel reduction in size as measured in ports and throughput.

The CO also represents the likely real estate for edge computing. It is close to the end user and is an existing asset that has ample space, as old CO hardware gave way to smaller VoIP system footprints. All of this suggests that the IP service edge must move at least to the CO level. It is impractical to have the service edge at the PoP behind the assets at the CO because it introduces latency. Remember that many of the applications have low latency requirements, so this becomes a key driver in building out the transport network.

5G will see a continuation of this evolution at the edge, including functional splits of the various network elements. For example, the BBU can be broken up into a distributed unit (DU) and a control unit (CU). The CU can support multiple DUs and can be located more centrally. It is important to note that there are latency considerations for this midhaul connection. In addition, the fronthaul will need to change in 5G services with the expected massive MIMO antenna deployments. Massive MIMO with beam forming significantly increases network capacity and coverage. The eCPRI specification defines how to carry radio signals over a packet network based on IP or Ethernet. This makes the fronthaul much more efficient and allows for more networking options including routing.

Having IP at the cell site opens a range of possibilities. RAN sharing, leveraging the fiber build out to service more enterprise customers, and eventually network slicing are just a few examples. To capitalize on this, operators recognize that they need to add routing. The Telecom Infra Project (TIP) members have defined a set of requirements for a Distributed Cell Site Gateway (DCSG) that pushes routing out to the cell site itself. Vodafone, Telefonica, Orange, and TIM Brazil defined both hardware and software requirements for this next generation of open, disaggregated, and interoperable devices. Hardware vendors have already built white box switches to the TIP specification and TIP announced their members’ plans to test commercial software. TIP describes their goal:

“DCSG is a 1RU fully-featured cell site router with a wide range of Ethernet connectivity options for client and network sides. As a cell site gateway, DCSG supports Layer-2, Layer-3 and MPLS features – with native time synchronization protocols such as IEEE-1588 v2 and Synchronous Ethernet for the mobile base stations.”

Other service providers are following similar paths. In 2018, AT&T announced plans to deploy “white box routers” at 60,000 cell sites. The company cited latency as a one of the main reasons for this addition of white boxes. “For some applications, latency is critical. For example, with augmented reality or self-driving cars, it needs to be near real-time for any applications running in the cloud,” the company said.

A large mobile provider has tens of thousands of cell sites and that number will increase dramatically with 5G deployments. This fact underscores the importance of routing to building robust services as the locations increase by another order of magnitude. It is also apparent from the speciation that the number of ports and associated bandwidth will be even smaller, although the software requirements remain carrier grade with protocols like MPLS. Thus, the goal is to have a full featured router with an even smaller form factor and cost as routing scales out another order of magnitude.