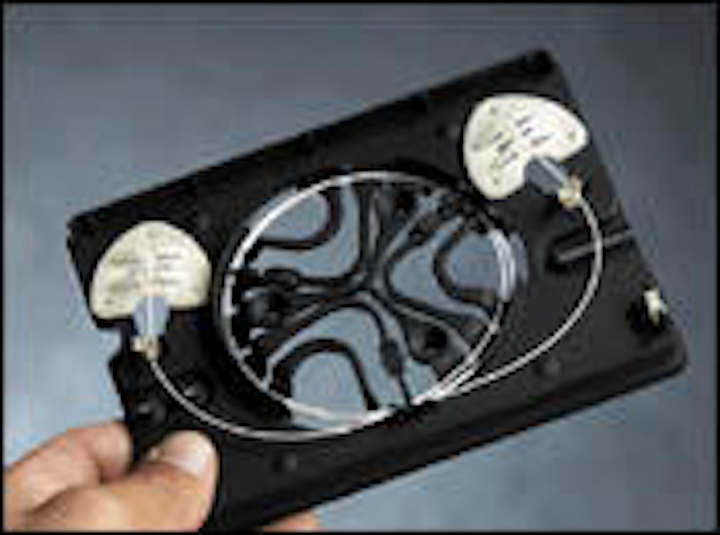 Ten tips to significantly improve the incorporation of mechanized assembly.

Like semiconductor and electronics vendors before them, optical communications manufacturers have reached the required demand threshold to justify the investment necessary to automate fiber-optic component and module assembly. Yet, as the industry comes to grips with the need for standardized automation to reduce costs and improve yield, many manufacturers continue to seek a competitive advantage through proprietary manual or semi-automated processes and frontier-like individualism and secrecy.

Thus, automation still lags greatly in adoption, partly because of cost and partly because optical subcomponents aren't designed in standard shapes and sizes that are easily fabricated through standardized automated assembly methods.

In addition, the process of assembling products, then attaching optical fiber, is extremely difficult and requires tolerances and repeatability levels simply not attainable by manual methods. Another intrinsic difficulty, due to the lack of standard automation equipment, is that product is not typically designed for automation as an assembly option. Yet, the industry desperately needs automation to gear up for the huge projected market growth, which is expected to accelerate from several billion dollars in 2001 to $10 billion or even $30 billion by 2005, according to various industry estimates.

As the manufacturing volume of fiber-optic components and modules increases, the pressure to cut prices is mounting, which potentially could result in lower profit margins and renewed scrutiny of labor costs. One solution is to move operations overseas, but the inherent complexity of assembly, as noted earlier, argues against that. A better solution is to implement automation systems that minimize labor and reduce costs, while increasing first-pass yield and repeatability. Automated systems will enable manufacturers to scale up or down quickly to match industry cycles. As the Table on this page illustrates, automation systems can provide significant cost savings in optical-component and module assembly.

To date, fiber-optic telecommunications component and module manufacturers have hobbled along as best they could. Component manufacturers, lacking the support infrastructure of a mature industry, have been forced by default to design their own tools and assembly systems due to the lack of independent merchant capitalist suppliers. That, in combination with variable subcomponent and fiber performance tolerances, has made implementation of automated solutions very difficult.

Most processing systems today are semi-automated, operator-run equipment, which typically assists only one step of the process. For example, in fusion splicing of optical circuits, fiber is prepped by hand and manually loaded and unloaded into a fusion splicer. The entire process takes up to 15 minutes per splice, resulting in a low first-pass yield due to manual fiber prep. The result is a tremendous loss of time and money for each splice. 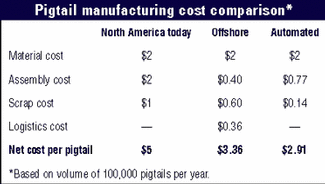 Merchant solutions, in the form of fully automated, standardized assembly systems, are being made available to address these challenges. Such equipment offers significantly higher volumes and yield at dramatically lower cost. Standardized automation systems that are far less costly to acquire and support than customized solutions have been introduced this year and show major productivity and cost dividends in component and module assembly and packaging operations. These modular systems, configurable with different tools for different tasks, are easily modified to meet the requirements of individual customers. These systems, for example, automate the process of fiber pigtail fabrication, fusion splicing, fiber attachment, inspection, and testing.

Taking advantage of these new automation tools does require investment in the form of planning, thought, and design changes. A design balance must be maintained between maximizing performance and enabling assembly through mechanized systems. Looking back to early semiconductor and electronic manufacturing, it is clear that simple design efforts provide a significant return in the manufacturing and assembly process.

The time has come for standardized automation in fiber-optic assembly systems. New technology requires standardization of subcomponent design and industry collaboration on basic processes, neither of which exists today. However, the burgeoning market demand for next-generation networks and the fiber-optic components that power them present incentives the industry can no longer afford to ignore.

Based on the automation experience of other industries, here are 10 basic "design for automation" tips that can significantly improve the ability to incorporate mechanized assembly.