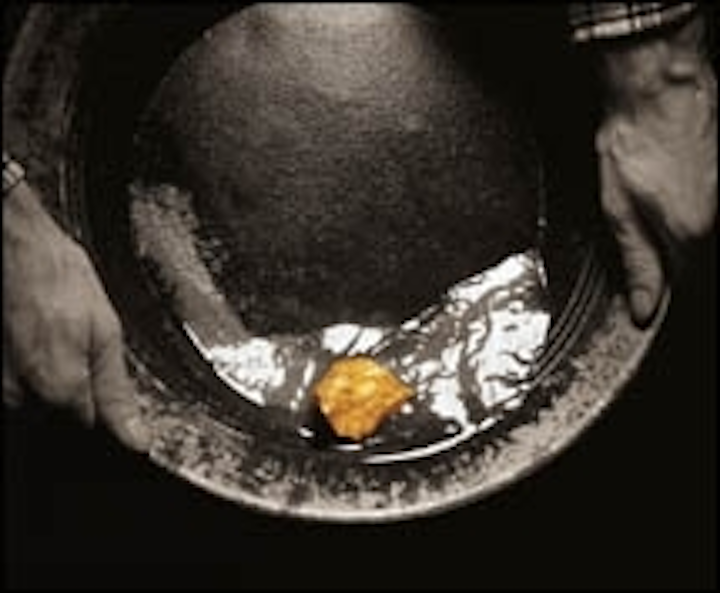 How much granularity do core networks require?

Today's data-CLECs only want to use the resources without getting involved in building and maintaining transport networks-in short, they prefer running bandwidth hotels. 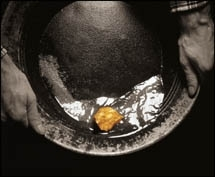 Gone are the days when the wealthy purchased and maintained villas in every town around the globe. Today, we rent hotel rooms by the night or the week, and leave the expense of building and maintaining them to someone else the rest of the time. The story of today's telecommunications market is very similar. In addition to incumbent local-exchange carriers (ILECs), interexchange carriers (IXCs) and other facilities-based carriers have built nationwide fiber-optic infrastructure of terabit capacity.

The non-facility-based competitive local-exchange carriers (CLECs), on the other hand, have depended on ILECs and/or IXCs for building their backbone network. The network built by CLECs is a fixed-bandwidth network with all the limitations that come with not owning a transport footprint. However, with the data-CLECs struggling to stay competitive in the current economic condition, new alternate business models are emerging.

Taking advantage of the availability of bulk bandwidth and new innovation in technology, this service provider business model relies on a "pay as you use" approach to providing services to different verticals. There are some requirements to make such a business model successful.

Like the modern traveler, this new breed of service provider expects to be able to reserve resources on the network at a moment's notice-and to be allowed to move on, penalty free, as soon as the resource needs end. When handling a voice call, these service providers expect to pay for only the duration and bandwidth used for the voice call and a few minutes of core bandwidth use. Then, they want to check out and pay no more.

They may buy an hour's worth of OC-3 (155 Mbits/sec) and resell it for a videoconference. But after that, they don't want to own the OC-3 connection. They want to use the resources, but don't want to get involved in building and maintaining a transport network. In short, they run bandwidth hotels.

A new breed of vertical service providers (VSPs) are emerging based on focused service offerings: virtual private networking (VPN), voice transport, voice resale, video conferencing, and other specialized products. They are targeted mainly at the vertical markets, such as hospitality, banking and finance, chain stores, etc. These service providers own next to nothing. They lease the lines and gear they need from equipment vendors.

For virtualization of resources to happen, the following requirements must be met:

In the old world, the granularity of any circuit was based on the bandwidth required for a voice call. Networks were built for voice. The DS-0 (64 kbits/sec) was the basic unit of generation, transport, and dissemination.

In the current network paradigm, a manageable unit of bandwidth is represented in the core network by a wavelength of OC-48 (2.5 Gbits/sec). The reality is that few enterprise applications use an entire OC-48 for daily business. Current customers still need T1 (1.554 Mbits/sec), with an occasional T3 (44.736 Mbits/sec), or a Gigabit Ethernet-based transport for most of the services. At the point where the wavelength meets the customer connection, virtualization of resources has to happen. That raises the obvious question of how much granularity core networks need to virtualize the resources. Is there a need for fine granularization, or can a service provider just throw wavelengths for every T1 circuit? 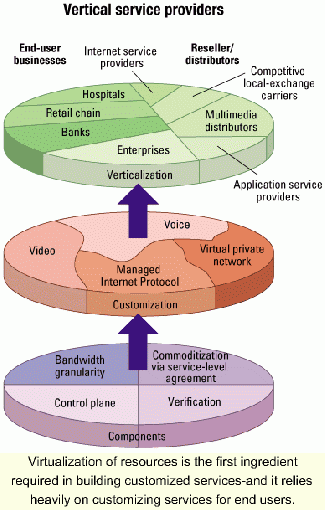 Virtualization of resources is the first ingredient required in building customized services-and it relies heavily on customizing services for end users.

The key to success in "hoteling" bandwidth is to succeed at the granularity game, enabling a vertical service provider to allow many customers to use the same bandwidth at different times. The bandwidth hotel operator may not own a single mile of fiber or a single legacy equipment switch. This new segment is composed of "feet-on-the-street" sales teams focused on taking the bandwidth resource and turning it around quickly.

The reality is that the bandwidth explosion has created huge supplies of new capacity, and bandwidth prices are in freefall. Bandwidth hotels may be the saviors of infrastructure owners. Accor-ding to Stephen Young, principle consultant at Ovum, a London-based analysis and consulting firm, future investors will increasingly require that carriers undertake effective risk management, rather than adopting business plans based on the "if you build it, they will come," philosophy.

Young says trading bandwidth as a commodity is one way to get there-cutting down on sales, general, and administrative expenses; enabling quicker access to more customers; and extending network reach without the expense of digging.

Some say the trading of bandwidth will not happen and bandwidth is not like other commodities. They complain there are not enough players to create a liquid market, the product is not sufficiently standardized, delivery is based on best efforts, and carriers are reluctant to embrace commoditization and trading. However, Young's contention that jittery financial markets will force carriers to find new ways to do business, including how they buy and sell capacity, seems on target. He believes for bit transport, the name of the game is lower costs and higher volumes-and trading commoditized bandwidth is one way to get there.

Static IP circuits will be required first before any serious bandwidth exchange can take place. This requirement is almost a proof-of-concept for IP-based networks. It will be followed by dynamic IP circuits in the core controlled by the intelligence of the control plane. Eventually, dynamic end-to-end bandwidth allocation and tear down will be the trend. This approach is solid to establish a common set of SLAs first and to build the requirement of an operation support system to support the dynamic nature of the on-demand services.

Bandwidth awareness is knowing how much bandwidth is available at any given minute, making it available to a customer who needs it, and turning a profit on the deal. Throughout the 1990s, the answer to capacity shortfalls was to open another channel or bury more fiber. Presto! The problem was solved. But it takes four weeks to turn up a new circuit. No longer is it economically reasonable to throw bandwidth at a transport problem and take four weeks to get it solved.

In the context of virtualization, bandwidth awareness requires a nationwide fiber carrier to provide both flexibility and visibility into its network, which allows bandwidth hotel operators to mix and match their requirements against available options and optimize the service architecture.

The easiest way to bring awareness to bandwidth is with the addition of control-plane functionality. A control plane facilitates communication be-tween the generating and consuming entities that results in dynamic brokering of available resources.

Just as hotel guests demand the best and most flexible service available, it is not unreasonable for enterprise customers to expect a bandwidth hotel to provide granularity ranging from simple DS-1 (1.544-Mbit/sec) circuits to full OC-48 service on a single platform. Ideally, this platform should be a Multiprotocol Label Switching-based platform, which is the logical first step to realizing the ultimate goal of a converged network infrastructure. Further, it should allow the bandwidth hotel operator to offer a wide range of services: a combination of point-to-point IP, VPN, best-effort IP, and public-switched telephone-network voice services on a single infrastructure.

Lacking this granularity and flexibility, the network falls victim to a form of "hardening of the arteries." From the core out, the network becomes hopelessly bogged down with static connections and loses its ability to dynamically adjust to changing conditions-whether for disaster recovery or for provisioning profit-making services on the fly.

One way to make efficient use of available bandwidth is to allow a bandwidth hotel full access to all the resources on the network, which may require a leap of faith for many legacy network managers. The market, however, demands that fiber owners give full visibility into their network-as well as allow access to fibers or trunks in real-time.

Ovum's Young says while business-to-business-neutral physical exchanges have attracted the lion's share of publicity, it is other market players that will precipitate the trading of commoditized bandwidth. The business-to-business exchanges will act as "pathbreakers" in the market for trading minutes, but the most significant impact of commoditization will be in the market for managed transmission, in the form of "fat pipes" between major cities. It's no longer a question of "if," says Young, but "when" commoditization and trading take place.

For virtualization of resources to be successful, however, a robust verification mechanism must be in place. In the dynamic environment of bandwidth exchanges, customers want visibility into their virtual network inside the service provider's network. The systems should support a typical customer-based network management that enables customers to check the current SLA status; check for alarms; perform tests; get periodic reports on network conditions; and change the parameters of interconnection, such as required bandwidth, bandwidth characteristics, and pricing.

With capital expenditure spending drying up, the great bandwidth experiment is coming to an end. While many fiber plants are being underutilized or used inefficiently, there is a demand for customized services at the customer level. There is an excellent business case for leasing existing bandwidth to those who can sell it on the street.

The business case for VSPs is a solid one. They can take advantage of the underutilized resources in the core network and turn them into services. VSPs are in a business that requires great relationship skills-both with enterprise customers and fiber backbone companies-but little in the way of infrastructure investment. It is possible that core network operators with excess fiber capacity will look at the VSP business model as an opportunity to convert core bandwidth from statistics to real revenue.

Mihir Mohanty is founder and vice president of marketing for Cemip Networks (San Jose, CA). He can be reached via e-mail at mmohanty@cemipnet.com.