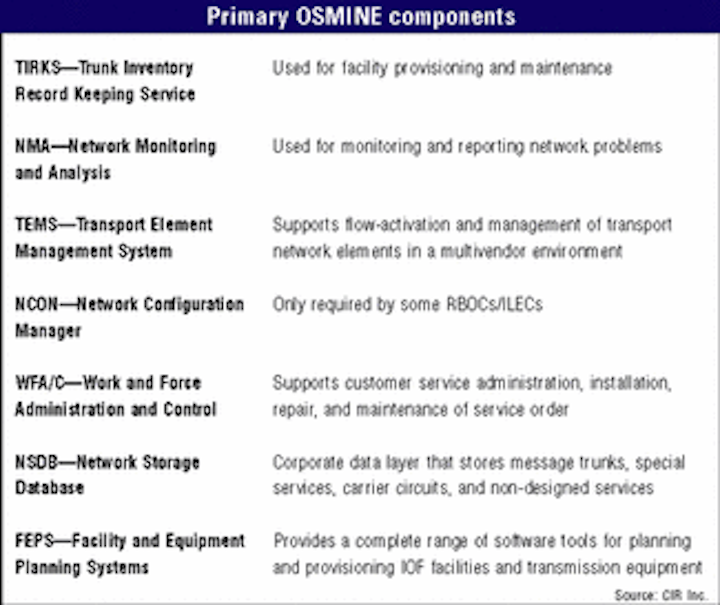 Telcordia Technologies Inc. (Morristown, NJ) has designed roughly 80% of the operating systems currently used by the regional Bell operating companies (RBOCs), so it's logical that the company would offer a process whereby vendors could verify that their products interoperate with these systems and provide the requisite flow-through support. That process, known as OSMINE, or Operations Systems Modification of Intelligent Network Elements, is "the best there is," says Sam Greenholtz, senior analyst of optical-networking research at CIR Inc. (Charlottesville, VA). However, he adds, "I am not convinced, and neither are a lot of people, that the costs should be as high as they are, nor should it take as long as it does."

CIR recently released a report, "Verizon and SBC: A Large Brick Wall for Non-traditional Optical Gear Suppliers; An Overdue Need for Dramatic Changes in Bell Operating Company Procedures," in which analysts claim that "the OSMINE process significantly hampers progress of the entire metro optical-networking market." The report also describes Telcordia's position as "monopolistic" and contends that the whole situation "borders on being a scam."

While the OSMINE process may provide a necessary service, some argue that it also represents a significant barrier to entry into the RBOC/incumbent local-exchange carrier (ILEC) space. On average, the process can take anywhere from six to 18 months. Most RBOCs, including Verizon and Bell South, will not even look at a product until it has completed OSMINE. The folks at SBC will look at it, says Greenholtz, but they won't make any commitments or put it in their labs without OSMINE compliance. Of the major carriers, Greenholtz believes only Qwest will consider a product without Telcordia's stamp of approval.

"Historically, some of the time frames that the OSMINE process required would certainly not be suitable in today's market and environment," admits Dennis Tinley, Telcordia's vice president and general manager of business development. He asserts that the process has been updated and the time required for its completion significantly shortened. "We are with some consistency able to achieve the integration of network technology at or very close to the general availability of that technology in the marketplace," he asserts.

OSMINE's critics also claim the pro cess penalizes startups that cannot raise the requisite funding. "Say you are a new vendor, and you're coming in with this great new product," says Greenholtz. "You come to Telcordia and the first thing you are expected to do is write a check for somewhere around $7 million or $8 million just to get started. Most companies can't afford to do that."

Greenholtz contends that this initial expense is only the beginning. To complete the process will probably cost between $10 million and $15 million, depending on the technical level of the product. Moreover, CIR analysts claim that if a startup has not secured at least $75 million in funding, it most likely will not have sufficient funds to engage in the OSMINE process. 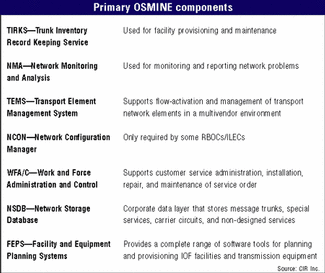 What makes Telcordia's prices seem even more "outrageous," argues Greenholtz, is the fact that the company has already developed the basic program. "It's not like they are going out there and building something new each and every time," he contends. "Now, obviously, depending on the vendor's product and so forth, there are some minor changes. But the basic form does not change."

Tinley admits that the cost varies greatly by network element and its requirements for integration. But he says that, on the whole, the expense is commensurate with the value OSMINE provides. "Telcordia systems have really been a key reason why the major service providers in the U.S. have been able to achieve best-in-class operational efficiency," he asserts.

ONI Systems (San Jose) is currently undergoing the OSMINE process and hopes to be compliant by the fourth quarter. According to Rusty Cumpston, its chief operating officer, the costs are commensurate with what the RBOCs and ILECs require. "The Telcordia applications are a proven operating system for managing, provisioning, billing, and keeping inventory over a broad, broad spectrum of networking products-from legacy telecom to new datacom products to new optical-networking products," he says. "To be supported [by Telcordia], you have a guarantee that is meaningful: that your products will work with their applications."

However, Cumpston does admit that the situation is more difficult for startups, given the state of the capital market. "If you are a startup company, and you're faced with the decision of 'do I go to Telcordia and engage them to support my product?'-when that product hasn't matured to the point where it is being tested in any early adopter's hands, let alone an ILEC's hands-then that is a really tough decision to make," he concedes.

In the past, attempts have been made to ease the industry's reliance on Telcordia's qualification process, but to no avail. Greenholtz, a 28-year veteran of Bell Atlantic, now Verizon, took part in an initiative designed to eliminate the Trunk Inventory Record Keeping System (TIRKS) program. Considered the cornerstone of the OSMINE product suite, TIRKS provides an accurate account of the network, including the location of network elements and how they are connected.

The Bell Atlantic project, dubbed BOLD, did not succeed. "I think after spending $15 or $20 million on the project, we just threw up our hands and said it couldn't be done," he recalls. "There's just so much involved with TIRKS, with trying to reinvent the wheel, really. You just can't move a whole system into another system and have it work."

TIRKS is so ingrained into the network, he admits, that there may not be a way to eliminate or replace it. That said, Greenholtz does see "glimmers of hope," as he calls them, that may alleviate vendors' reliance on the full suite of Telcordia products.

Several vendors, including Lucent Technologies Inc. (Murray Hill, NJ), are developing element-management systems (EMS) that, when mature, may eventually replace or reduce reliance on the network monitoring and analysis portion of the OSMINE process.

"All the vendors, under all the RFPs [request for proposals] that are currently out there, are required to adapt their products, so that they will work with this EMS," explains Greenholtz. The EMS detects and determines the nature of problems in the network.

The EMS products should also have an impact on OSMINE's Transport Element Management System (TEMS) process, contends Greenholtz, because upgrades that are accessible through TEMS now will be downloadable from the EMS.

The OSMINE process appears to be a permanent fixture on the RBOC landscape, as it provides a necessary service to both vendors and service providers. While the process itself is sound, many believe that something must be done to alleviate the expense and length of time required to complete it. In their report, CIR analysts assert that the threat of an antitrust suit "should be strongly considered by the U.S. government as the only viable solution to this problem." To date, no such action has been taken.