Growth to return to DWDM market in 2002 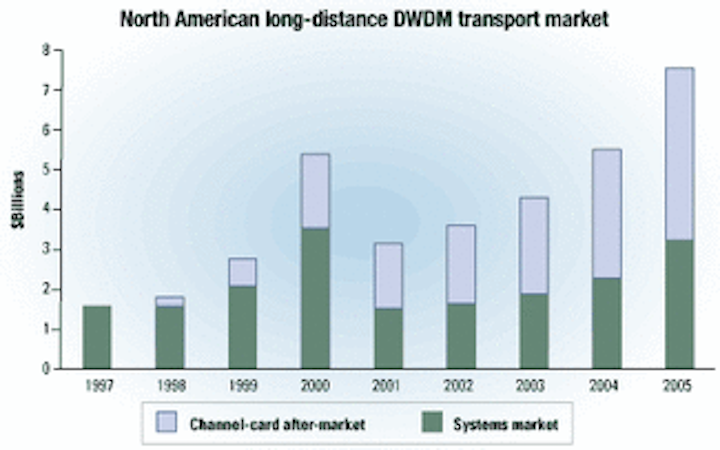 Led by growth in channel cards, DWDM sales will begin to rebound next year.

Despite a rosy outlook for the optical equipment sector in late 2000, the market suddenly soured as 2001 began. KMI estimates the North American market for long-distance DWDM transport equipment will decline 42% in 2001 to a little more than $3 billion.

KMI places this market event within a broader context. The surge in DWDM equipment expenditures through 2000 and the 2001 downturn was primarily related to general business and network construction cycles. With a handful of players and predictable traffic demand until 1995, long-distance carriers were chiefly immune to large swings in network construction.

The explosion of demand for data and Internet services, however, changed the network planning strategies of the existing carriers and encouraged the entry of new players. Starting in 1996 and accelerating over the next few years, new carriers emerged with plans for nationwide fiber-optic networks using cutting-edge fiber and equipment technologies. With lower-cost-per-bit-rate networks, their business plans were based on providing lower-cost services, designed to compete head-on with incumbent players with networks of low counts of older fiber and legacy equipment.

The terrestrial long-distance network build-out began to act more like submarine markets. Capacity constraints on submarine routes spur a number of players to construct new networks over several years, then the build-out pauses as capacity expands well beyond market requirements. The cycle resumes as capacity is filled. With so many players coming into the terrestrial long-distance market with new high-capacity networks, it was only a matter of time before long-distance network expansion would come to a halt. 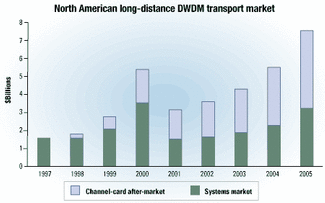 At KMI's Newport Conference in October 1999, KMI forecast a sharp decline in annual fiber deployments by U.S. long-distance carriers starting in 2001 and continuting for several years. In the go-go environment at that time, that was a difficult forecast greeted with some skepticism.

Seeing bandwidth demand doubling each year and looking at all these new nationwide networks-most using nonzero dispersion-shifted fiber and many with 100 or more fibers per cable-in late 2000 KMI believed the DWDM systems business would not suffer the same fate as fiber deployment. Rather than a decline, KMI expected only a continual deceleration of growth in the DWDM market from the doubling that occurred in 2000 to 27% in 2005.

As is now known, like the fiber business, the DWDM systems business succumbed to the end of a construction cycle. In addition to the end of "greenfield" long-distance network builds, the market also became a victim of the success of its own technology. Vendors of DWDM equipment have touted their products as being a cost-effective way to scale a network. Carriers can install a DWDM chassis with a few channel cards lit, then add channel cards as demand warrants. This "build as you grow" feature is a key selling point, because the carrier does not have to invest in a fully deployed system on day one.

But it also means that DWDM system deployments are sensitive to a cyclical pattern of capacity fill. To meet bandwidth demand this year, carriers that have completed their networks are simply adding channel cards to previously installed systems. So while DWDM equipment has delivered on its promise of scalability, that feature has prolonged the cycle for new equipment expenditures.

KMI divides the DWDM systems market into a subset of new systems deployed (terminals and amplifiers) and the channel-card market (sometimes called the growth or retrofit market). While the overall market for long-distance DWDM in North America will fall 42% in 2001, the part of that market for new systems will drop 60% (to about $1.5 billion). This drop will be offset by a relatively flat market for channel cards-the result of strong growth in unit quantities offset by an expected sharp decline in average price in this year's competitive environment.

Carriers that deployed high-capacity DWDM systems in 1999 and 2000 are simply filling that capacity as demand warrants in 2001. But carriers can only do this for so long; eventually, the system will fill to capacity. So when will the market turn around?

The flavor of the day for telecommunications equipment market-research topics is capital expenditures (CapEx) and its related "demand-side" analysis. Most good market researchers in this field certainly pay attention to carrier spending. Data gleaned on supplier revenues must be checked against their customer's network deployments.

Relying on CapEx and carrier input primarily or exclusively, however, can distort the market view. The universe of equipment customers is large-hundreds worldwide in the case of DWDM. Market researchers will find it hard to get complete data for a majority of carriers, so data obtained from a select number of carrier interviews must be extrapolated into a wider market. The result is usually an underestimate of the size of the market.

In addition, while carriers may provide overall guidance for CapEx, they usually don't reveal the exact composition of that spending, which may shift from year to year.

To determine timing for a recovery in DWDM procurement, rather than rely on statements about CapEx, KMI looked at average system capacities deployed in 1999 and 2000 and extrapolated fill rates based on moderate assumptions about bandwidth demand (100% for data; 7% for voice).

Based on inputs from vendors and their customers that 10 channels were lit on average 24-channel capacities in 1999 and 12 channels of average 42-channel capacities in 2000, KMI expects that these systems will fill to 50-70% of capacity at staggered rates throughout 2002 and into 2003. Most carriers will not want to exceed utilization of 70% capacity without having additional capacity ready or in the pipeline. For DWDM, that typically means lighting additional fibers with new systems.

Given this scenario, KMI forecasts that the North American long-distance market for DWDM transport equipment (systems and channel-card upgrades) will grow by almost 15% from $3.1 billion in 2001 to $3.6 billion in 2002, although the bulk of this increase is still in channel cards. KMI does not expect this market to meet or exceed its 2000 level ($5.3 billion) until 2004 ($5.5 billion).

At the same time, the market for DWDM is growing sharply, albeit from lower levels, in Asia-Pacific and Latin America. The metro DWDM market is also growing rapidly worldwide. With growth in these areas, KMI projects the worldwide market for DWDM for all applications will rise at a 34% compound annual growth rate from $7 billion in 2001 to $23 billion in 2005.