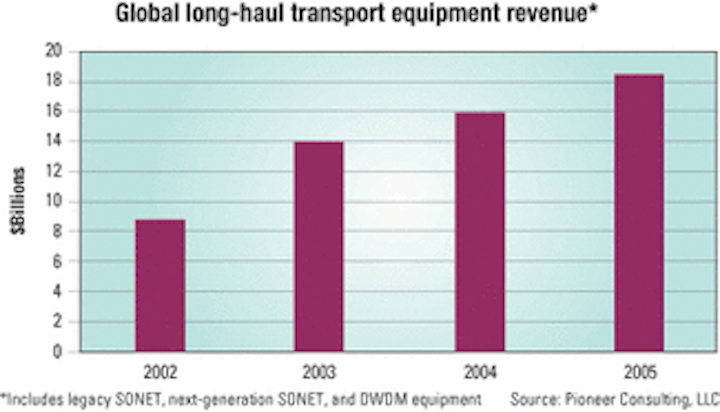 As the recession all but halts network spending, long-haul carriers and vendors must make adjustments to future plans for expanding and upgrading optical infrastructure.

Just two short years ago, the long-haul (LH) telecommunications market was going gangbusters, laying national and international fiber-optic cable, deploying bleeding-edge equipment, and dreaming about terabit-even petabit-networks filled with the data, voice, and video from end users with insatiable appetites for more capacity. Now reality has set in. Almost overnight, economic recession gripped an out-of-control optical-networking market and sent it into a tailspin.

Although few want to talk about the gloom and doom of the day for optical carriers and vendors, nobody can deny that companies have been hit hard-some to the point of collapse. The optical market that once chanted "if you build it, they will come" is now faced with requiring an "up-front and certain" return on investment (ROI).

The LH carriers' new success-based business model puts a huge burden on optical equipment vendors as they compete for what little network investment remains. Positioning for the future has become the focus for equipment providers, knowing that having any stake in a carrier's network during tough economic times has the potential to pay off when expansion eventually resumes.

In the ultra-long-haul (ULH) sector, the recession has coincided with, and exacerbated, a naturally occurring downturn that is part of a regular five-year investment cycle, according to Julian Rawle, senior marketing analyst for ULH fiber-optic systems at Pioneer Consulting (Boston). As a result, the "private" business model for building ULH systems has taken a battering, as opposed to the "consortium" business model. Carriers are searching for a third model-a hybrid of the private and consortium models-that spreads the investment risk without compromising decision-making. 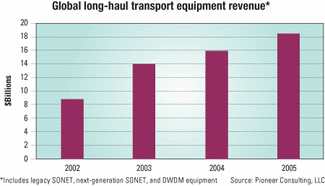 While the current doldrums continue the trend the market has seen for the last year, long-haul purchases should pick up next year.

"From an investment point of view, the ULH sector is currently in an 'ultra-realistic' phase," says Rawle. "Aspirations have been lowered, projects have been scaled back, and proposals to build 'global networks' have been shelved."

How each LH carrier adjusts to the market climate will obviously be key to keeping business out of the red. As carriers go, so go the vendors. "Carriers must place even more emphasis on lowering both capital costs and recurring operational costs," says Thomas Afferton, district manager for emerging transport network planning at AT&T (Basking Ridge, NJ). "As a result, vendors must focus on technology solutions that lower network costs rather than simply adding more capacity."

The successful vendor, says Afferton, will be the one who best focuses on carriers that have an established customer base, facilities, and the breadth of services to weather economic uncertainty. Product availability and the ability to manufacture in volume have been replaced by more pressure to have a full-feature system with zero operational issues. Carriers have the luxury of waiting for features, rather that going with sub-optimal equipment to ramp up network capacity more quickly.

Transport carriers are now more interested in systems that will provide a path for scalable growth and allow them to increment their cost only when incrementing revenue. According to Pioneer, a very important realization is that 10 Gbits/sec will dominate for the next 12 to 24 months. Vendors must allow carriers to stay with and even grow that line rate, yet still provide a vehicle that enables a smooth transition to 40 Gbits/sec.

Integrating the ability to handle multiple protocols is also an important consideration for vendors hoping to land transport customers, particularly if Gigabit Ethernet (GbE) takes off in the metro. Optical switching will also play a big role in LH networks over the next 18 to 48 months. Compatibility between intelligent optical-switching equipment and DWDM transport equipment is gaining importance, and vendors can position themselves well in the market by offering strong optical-switching products.

To remain competitive, market players may soon need to realize that competitive cost structures will be significantly different when the market recovers. Although there is general agreement on that, some interpret it as a cost shift, while others have recognized it as a cost restructuring. According to Rob Ward, chief architect for optical networking at Williams Communications (Tulsa, OK), vendors trying to shift their curve and squeeze margins a bit today to compete should realize that will not be enough two years down the road.

"Those that have found ways to technologically restructure costs will ultimately prevail," surmises Ward. "Dollars may be better spent today on development efforts moving toward this product redesign, because this new cost structure will not be a temporary shift-and each product's plan must be sustainable to stay in the game."

Tomorrow's transport
The future for LH transport, therefore, will be based on who will survive and the strategy shifts that enabled that survival. Even market forecasters have found it necessary to adjust their predictions for growth in most telecom market sectors. Probe Research Inc. (Monterey, CA), for example, says that competition-probably the most important driver for the telecom market a few years ago-is much less a factor today.

"Previous reports were based on the idea of an increasingly competitive telecom market, but we've seen that concept die in the past year," says Maria Zeppetella, vice president for network infrastructure at Probe Research. "Now, we are back to the incumbent telcos. Sales of LH will probably lull for a few years, then pick up as networks will need to be upgraded to meet traffic demands."

Pioneer's Jason Marcheck, senior market analyst of optical networking, agrees that for now, the massive investment of a few years ago has produced a situation where adequate capacity now exists in the core of LH networks. The investment has shifted to MANs, a natural migration. But there will be another natural shift back to the core once expanded capacity is necessary.

"While the current state of the world economy has clearly hurt overall investment in telecom equipment, there is reason to believe that the need for higher-capacity transport equipment will make itself evident," explains Marcheck. "Overall, I think an overestimation regarding the timing of 40-Gbit/sec systems caused the market to be somewhat inflated in late 2000 and early 2001."

Pioneer's latest forecasts show that carriers will not require 40-Gbit/sec capacity in the next 12 months. But when the need for 40 Gbits/sec arrives, it will likely spur additional investment.

In the undersea market, experts are still figuring out the effects of various ULH carriers filing for Chapter 11. There is the nagging question of what will happen to all those cables already in the water. Pioneer's undersea analysts believe if they are sold off at cents on the dollar, the purchaser will have an immediate cost advantage over the competition.

"If that happens, it could drive bandwidth down below cost," says Pioneer's Rawle. "Then the transoceanic optical-network market could look like the last scene from 'Hamlet.' One thing is for certain, there will be no more global networks built in the foreseeable future. There will, however, continue to be opportunities on specific routes or in certain underserved regions."

It appears the LH optical transport market will, at least for one or two more years, experience a slowdown as the demand for capacity catches up to its availability. Carriers won't remain stagnant but will work to adjust their buying practices for faster ROI. Improvements that can be made in equipment without replacing legacy gear will be in fashion, such as gear that can be used with legacy SONET infrastructure to carry other forms of traffic. But eventually, demand will resurface for more LH capacity-the question is, when?

"Some key applications that will drive this demand are nationwide storage-area networks and the popularity of GbE in the metro," says Marcheck. "If these two applications find acceptance, 40 Gbits/sec will become necessary sooner rather than later-perhaps in 15 to 30 months. If not, demand could be pushed back to the 36-to-60-month time frame, depending on what region of the world you're talking about."

However, what goes around still comes around-and LH optical transport will have its day again-though not like the heyday of "yesteryear." But as the MANs discover the need to transport more and more traffic beyond the city limits, the long-haul transport network market will rise to the occasion.