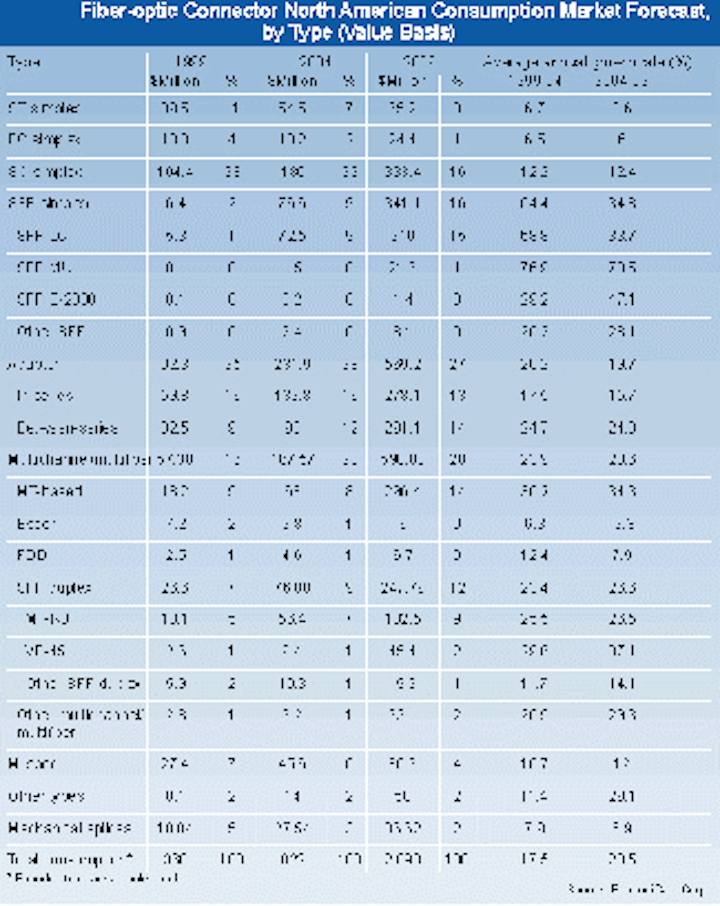 Higher-bandwidth demand is fueling the global fiber-optic connector and mechanical-splice market, according to an August report from research company Electroni Cast Corp. (San Mateo, CA). Global consumption in 1999 was $716.5 million. Singlemode connectors ac counted for 55% or $396.26 million of the worldwide market in 1999, followed by multimode connectors at 39% or $281.33 million, and mechanical splices at 5% or $38.88 million.

North America represented more than half of the total market with 51% or $367.7 million, followed by Europe with 24%, Japan/Pacific Rim with 18%, South America with 4%, and the rest of the world with 2% in 1999. Consumption of multimode connectors is considerably higher in North America due to the use of this type of connector in premises networks, horizontal interconnects, and equipment such as switches. Multimode-connector consumption accounted for 53% or $196.09 million of the North America market in 1999, followed by single mode connectors at 42% or $152.73 million, and mechanical splices at 5% or $18.84 million. The Table provides a fiber-opticconnector market forecast by type for North America.

Singlemode-connector consumption will continue to represent more than half of the total market, accounting for 57% or $966.73 million in 1999, and 56% or $2.77 billion in 2009. While still predominantly used in telecommunications networks, consumption for local-area and wide-area networks will increase along with data rates (more than 1 Gbit/sec) and the distances between network nodes. Multimode connectors will also experience growth during the period, representing 40% or $676.58 million of total market consumption in 2004 and 42% or $2.1 billion in 2009. 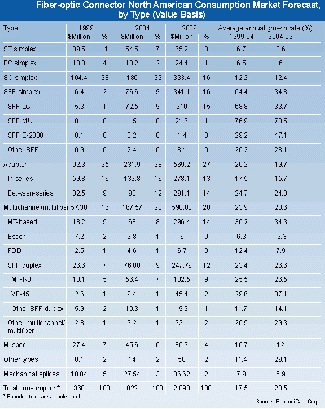 Worldwide consumption of mechanical splices will decline during the decade from 5% or $38.8 million in 1999 to 4% or $62.62 million in 2004, then drop to 2% or $97.2 million by 2009. These devices are used primarily for emergency restoration in telecommunications.

Worldwide consumption by region during the decade will shift only slightly, with North America representing 48% or $821.8 million of the total market in 2004 and 42% or $2.09 billion by 2009. Each of the other identified regions-Europe, Japan/Pacific Rim, and South America-will gain a single percentage point by 2004 and two additional percentage points by 2009. The rest of the world will increase from 2% in 1999 to 3% by 2009.

As fiber moves closer to users, the result is shorter links where connectors make up a substantial portion of installation costs. Thus, the trend is toward smaller, multifiber connectors that reduce space requirements and the cost per fiber interconnect, observes Stephen Montgomery, president of ElectroniCast.