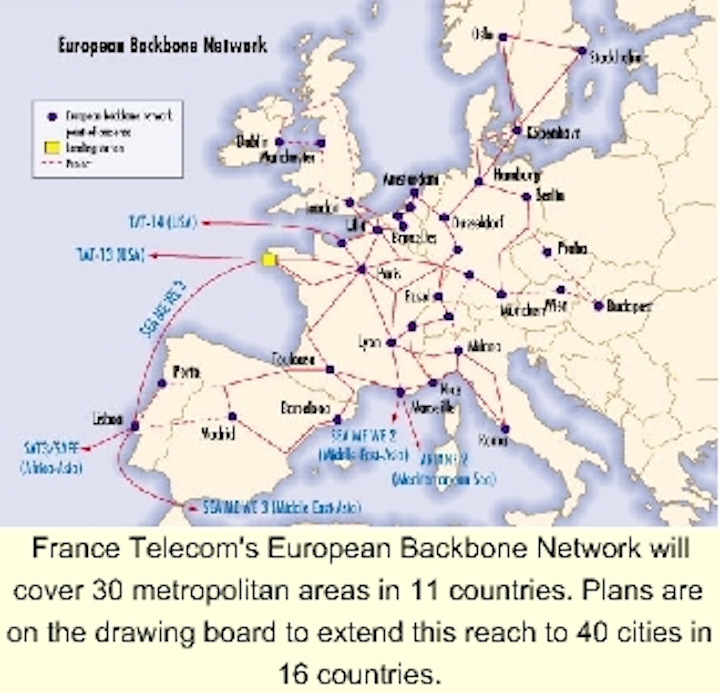 With Global One's fate still pending, France Telecom (FT) has developed a whole new strategy for its European business growth. FT's chairman and CEO, Michel Bon, used ITU Telecom '99 for launching the carrier's European Backbone Network (EBN), a state-of-the-art broadband network to connect Europe's largest cities. By designing the network to carry 80 Gbits/sec on each ring, FT planners have not forgotten one of the pillars of next-generation concepts--scalability. The company's EBN broadband capacity can be upgraded up to 1.2 Tbits/sec.

Currently connecting Geneva, Paris, and London, the EBN will span out to Spain shortly. The first phase of geographical coverage involves more than 30 metropolitan centers in 11 countries within the first year (see Figure). Plans call for expansion to 40 cities located in 16 countries when full EBN deployment of 20,000 km is finished. 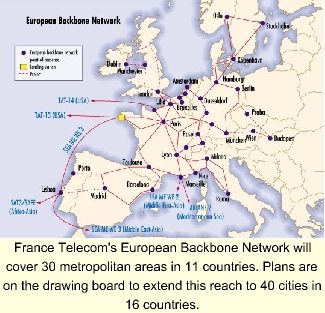 France Telecom's European Backbone Network will cover 30 metropolitan areas in 11 countries. Plans are on the drawing board to extend this reach to 40 cities in 16 countries.

FT is linking the EBN to the networks of France Telecom affiliates; hence, FT's claim that more than 250 cities will become accessible for its customers. FT's affiliated national operators are expected to provide local-loop infrastructure to connect customers to the backbone network, addressing the end-to-end connectivity requirements of multinational clients.

"The European Backbone Network gives us a key competitive advantage in Europe, which is the focus of our international development strategy," says Jean-Yves Gouiffés, group executive vice president, networks, of France Telecom. "By interconnecting our networks, the European Backbone Network allows France Telecom and its affiliated national operators to offer their customers direct, seamless access across the continent. The backbone reinforces our affiliates' position in international services. Their costs are cut and their quality standards improved." The total investment amounts to Euro 300 million ($290 million), and FT is looking for a break-even situation by 2002.

FT has selected Pirelli as one of the suppliers for the DWDM transmission systems for the EBN and some of its affiliates' key metropolitan networks. Initially, FT will deploy WaveMux 6400 platforms with 32 channels at 2.4 Gbits/sec with optional add/drop multiplexing of up to eight wavelengths. Denis Guibard, EBN project manager of FT, predicts that more than 50 points-of-presence (PoPs) will be installed in just a few months. High-speed links will run from England, Belgium, and Denmark across France and into Spain. Pirelli will also supply WaveIQ network-element and network-management software to support FT's network operations.

FT's revamped survival strategy has three components: the Internet, wireless, and international. In each of these segments, FT aims for steady, if not always rapid, growth to compensate for the inevitable loss of market share in its core, domestic fixed-line market. According to RHK analyst Stéphane Téral, "France Telecom prefers to execute its European strategy first and conquer the rest of the world later."

He views France Telecom's international prospects are tied firmly-but not exclusively-to Global One, of which FT is one of three partners, along with Deutsche Telekom (DT) and Sprint. "For the next two months, FT's international strategy depends on whether it retains, or perhaps expands, its interest," asserts Téral. "When the smoke has cleared, the French company could find itself in sole control of the international carrier. Sprint has already expressed hope of selling its stake, and DT has hinted strongly at a desire to unload its share. This venture is not profitable, but it does give FT the global breadth it covets."

France Telecom's approach to its EBN deployment differs from how other incumbent European carriers (e.g., BT, Cable & Wireless, Telia, or Swisscom) have attacked neighboring European markets. Francis Kretz, senior vice president of FT, explains that "FT technology and procedures are used when rolling across border infrastructures outside France. This approach ensures the coherent development of the networks and allows better integration."

While the main focus of the EBN project is to create a seamless high-performance network across the continent, priority clearly has been given to routes linking FT affiliates. FT has all major European markets already covered except for Europe's largest domestic market, Germany. FT's affiliates include such carriers as NTL (United Kingdom), Mobistar (Belgium), Mobilix (Denmark), Uni2 (Spain), Casema (the Netherlands), Wind (Italy), Optimus (Portugal), and Multilink (Switzerland). Kretz explains that "FT aims to create affiliates in every major European market."

"Regardless of the outcome of Global One's future, it's a very sound strategic move for France Telecom," concludes Barry Flanigan, a London-based consultant at Ovum. "France Telecom had to do it, but equally, building this network is not going to generate lots of incremental revenues. There is a fierce battle shaping up among small new entrants, incumbents such as BT and Telia, and large American groups with fairly deep pockets. There are at least 12 to 13 carriers building pan-European networks."