The new S3057 transceiver from AMCC is an OC-48 multiplexer and demultiplexer clock synthesizer device. It can be used for OC-3, OC-12, and Gigabit Ethernet operation, as well.

Thanks in part to increasing customer demand for further integration, diverse manufacturing relationships, and new process technologies, neatly defining what comprises the IC market for optoelectronic interfaces is no simple task. Tracking the actual number of ICs sold for use in optoelectronic interfaces is difficult because companies are offering several variations of circuit designs to meet customer needs. "Any kind of [in-depth] analysis that I would do requires peeling all these different layers apart to make sure that there's no double counting," explains Tom Hausken, a senior market analyst at Strategies Unlimited (Mountain View, CA). "To get a precise number here is a little tough."

According to Hausken's calculations, the data-communications market shipped approximately 9.8 million transceiver circuits in 1999, with an estimated total market value of about $150 million. The analyst predicts a 30% increase in units shipped for 2000, with prices dropping by 25%, maintaining the total market value of 1999. Hausken's data-communication figures are for transceivers only.

Hausken notes that in the telecommunications market, fewer units are being shipped but at higher prices than data-communications units. "That's why their dollar figures are so close to datacom's," he explains. Hausken expects telecommunications unit shipments to increase by one-third for 2000. However, prices will go down 25%, maintaining the total market value at around $144 million. "The decrease in price washes out the increase in volume," he says. Prices are decreasing as the electronics market matures. "Electronics are getting cheaper and cheaper all the time. While the market is expanding like crazy, it makes it hard for suppliers to really benefit. OEMs [original equipment manufacturers] and service providers are the ones who benefit the most from this in their margins," he says.

One of the key emerging IC trends for both telecommunications and data-communications optoelectronic interfaces is in the area of integration. More elements-such as multiplexers, de multiplexers, laser drivers, lasers, trans impedence amplifiers, and photo detectors- are sharing space on the same chip in various combinations depending on the application, especially in the area of transceivers (see Figure).

There are reasons not to integrate in certain situations, but the general trend is to add as much functionality as possible in the smallest amount of space feasible. "Some equipment [makers] want to be able to partition. For certain reasons, they want certain functions in different areas than other people. That's when you get a flexibility benefit by not integrating," says market analyst Jeremy Bunting of Thomas Weisel Partners, LLC (San Francisco). "But many people want to pack as much stuff in as small a space as possible because it makes their equipment smaller and less expensive. Then, the integration level starts to get higher. I think both things hold sway, but I would say that with anything else in electronics, the leading-edge driver is higher integration and increasingly higher speed."

The search for speedier and more cost-efficient materials has led to major advancements in process technologies in recent years.

Meanwhile, silicon also is commonly used as a base material for ICs because it is abundant, inexpensive, and easy to work with. Although silicon-based chips are speedier than in the past, they are still slower than circuits manufactured through other process technologies. However, a stable version of silicon germanium (SiGe) became avail able a few years ago. It offers designers a middle ground in performance between silicon and GaAs but is closer in cost to silicon. Another advantage of SiGe is that it is compatible with complementary metal-oxide semiconductor (CMOS) technology. SiGe devices are cost-effective primarily because they can be fabricated on the same production lines as silicon.

Applied Micro Circuits Corp. (AMCC-San Diego) uses the SiGe process for production of its new S3057, a fully integrated OC-48 multiplexer/demultiplexer clock synthesizer interface for use in SONET/SDH and certain Gigabit Ethernet applications. "By fabricating the device in silicon germanium, we designed a solution that offers the advantages of both high-speed performance and a high level of integration in the same chip," says Ken Prentiss, AMCC's director of marketing for telecommunications products. "AMCC is a silicon-based company, and we've been involved with providing chips to the marketplace for OC-48 for almost two years now. A few years ago, there was nothing but gallium arsenide-type products being used in the high-speed communications world, and by that I mean 2.5 Gbits/sec and above. But gallium arsenide fabs are very few compared to silicon fabs, making the investment and cost in silicon much more attractive to our customers." 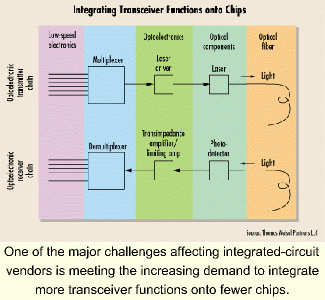 One of the major challenges affecting integrated-circuit vendors is meeting the increasing demand to integrate more transceiver functions onto fewer chips.

SiGe-based OC-48 solutions in 1998 were successful enough with AMCC customers that the company introduced more such devices. "Now we've [announced] some OC-192 devices as well as 10-Gigabit Ethernet devices in silicon," says Prentiss.

The new NP4521, for use in equipment such as terabit routers and edge connectors, uses the same proprietary design technology-called current-controlled CMOS (C3MOS)- that NewPort developed for its NP2510 OC-48 SONET product family, also released last year. C3MOS technology is based around transistor-level design, typical in mixed-signal methodology but not common in conventional CMOS. The company has filed 12 patents around the technology.

NewPort believes its C3MOS product offerings eclipse similar devices fabricated in other technologies. "With this [technology], we have made GaAs- and SiGe-based solutions for the OC-48 market obsolete," says Anil Bedi, president and CEO. "Why would anyone use a solution that is 3 to 4 W when you have a fully integrated solution at 1.3 W? For all new designs, new sockets, nobody would consider anything but CMOS. It just doesn't make sense to use GaAs or anything else."

Defying perceptions about silicon's less-speedy capability, a new 10-Gbit/sec transmitter/receiver chipset from GIGA (Skovlunde, Denmark) is based on conventional bipolar silicon technology. Last March, the fabless integrated device manufacturer became one of the first to ship such a chipset in volume to the telecommunications industry. 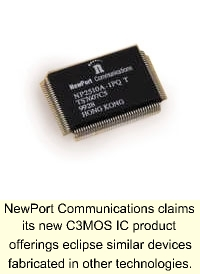 The GD16544 receiver IC integrates a 1:16 demultiplexer with a full clock recovery and PLL function, and its GD16555B transmitter IC integrates a 16:1 multiplexer with a clock generator and PLL circuits. GIGA is sampling smaller size, higher performance, ball- gate-array (BGA) versions of the chipset now with full production later this quarter. The new versions feature a LVDS (low-voltage differential signal).

"The move to silicon is important to the user community as well as to GIGA," says Steen Gundersen, vice president of sales. "STM-64/OC-192 has moved from a niche application to the mainstream within a year. The user community is looking for high-volume technologies to meet this demand." According to the company, the new silicon devices provide better performance than GaAs-based predecessors with 20% less power. And lower manufacturing costs led GIGA to decrease prices by 25%.

Driving the demand for increased port density in smaller packaging are manufacturers that want to bring the size and power dissipation of their equipment down and the performance up.

CMOS is key in enabling designers to gain more functionality on a single chip. "As CMOS begins to take hold at 155 and 622 Mbits/sec, integration is also happening. So you're getting the serializer and deserializer functions being integrated with the clock recovery, and also at some point, you'll end up having a SONET framer integrated," says Stewart Kelly, director of the communications business unit at Semtech Corp. (Newbury Park, CA). "I don't know of anything in production yet for 622 Mbits/sec in CMOS. If that happens, then you'll see other functions [being integrated]. For example, with SONET, you'll get more and more of the SONET functions added and integrated so that the package gets smaller and the density gets higher. Therefore, those that are buying small-form-factor transceivers are also getting more mileage out of the silicon that they are putting on the same board with it. They can pack more channels onto a single card."

Semtech's new ACS9010 trans ceiver IC, in tegrated with laser and light-emitting-diode controller, driver, and receiver functions, employs proprietary ping-pong time-division duplex architecture. With ping-pong, the transmit and receive operations of one modem are interleaved so they do not occur simultaneously. This technique results in no crosstalk, enabling the silicon integration of the transmitter and receiver.

The interest in OC-192 systems is growing within the industry. Yet, the high cost of fabricating 10-Gbit/sec optoelectronic components will be a major factor in the rate of their actual deployment.

"Communications systems are getting faster and faster and so are the data rates," explains Thomas Weisel analyst Bunting. "Even if the optical fibers [are capable of] faster bit rates, the electronics need to be able to run as fast as the entire system. For example, when [suppliers] are saying, 'Oh, we're going to be rolling out OC-192 fiber-optic links,' then the question should be, 'Oh, that's great. Are you building the electronics that sit at the end of it?' The electronics have to be at OC-192, too. You also have to ask, 'How real is the technology?' Things may look great on a data sheet, but how manufacturable is it? As speeds get higher and higher, building circuits in [volume] gets harder and harder."

Last year, Vitesse introduced the VSC8073 10-Gbit/sec multiplexer and the VSC8074 10-Gbit/sec demultiplexer as a 16-bit chipset for OC-192 applications. The chipset is designed for DWDM, undersea transmission, and test equipment.

As long as there is a need for exponentially higher bit rates in high-performance communications systems, speed will remain the foremost driver in the industry.

But with increased speed comes increased challenges. Suppliers are tasked with providing their customers small, high-speed, high-density solutions that do not compromise performance or cost-effectiveness.

As process technology continues to improve and as more symbiotic customer-vendor partnerships develop, practical, very-high-speed solutions may not be as far off as they may seem.