How long should SDH be prolonged? 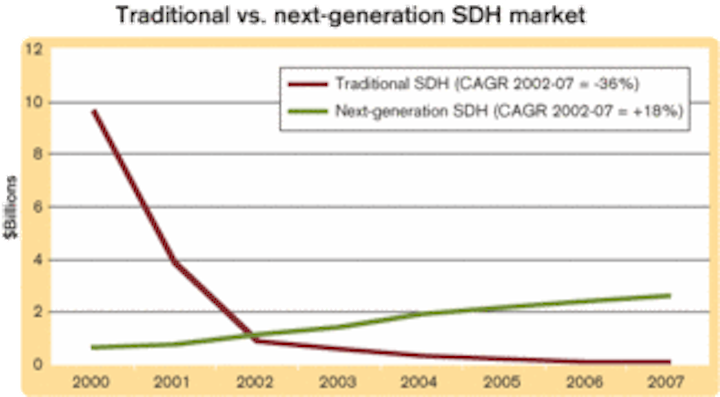 Since the 1970s, when optical telecommunications systems were first tested in the network, optical communications technologies such as Plesiochronous Digital Hierarchy (PDH), SDH (and, of course, SONET), and WDM have been more and more widely deployed. Now, the amount of data traffic is gradually exceeding voice in today's carrier networks. The controversy over whether IP thus becomes preferable to ATM, SDH, or other optical technologies grows hotter and hotter. Many people in the telecom field now wonder how much longer should SDH technology be prolonged? What kind of SDH systems should be deployed now in the network?

An analysis of network services, new developments in SDH technology, and the transport equipment market suggests that SDH—with some new features—will continue to be the predominant transport technology for the next several years.

Research shows that data traffic is growing faster than voice traffic; it is said that data traffic is growing 40% annually, while voice traffic is growing at a rate of 10% per year. Thus, the mainstream telecom network traffic in the future will be data. Yet, SDH was designed mainly for consequent bitstream voice services. That has led many to conclude that a circuit-switched network can't support the next generation of communications in which data is the main service. From the perspective of service capacity design, bandwidth, network connection mode, or switch mode, network resource efficiency is low—only 30%. So, say these observers, it is not good to deploy SDH equipment for the future. 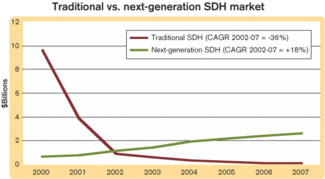 Despite the hype surrounding other protocols, SDH technology, particularly next-generation SDH, will continue to generate significant sales in the foreseeable future.

But such opinions are based on trends in only part of the telecom field. First, the basic requirement for the customer remains voice, and therefore the main revenue for the operators comes from voice services. Second, the services requirement in developing countries is different from that in the developed world. Most countries in the Asian and African regions are developing nations. Computers are not very common in these areas, illiteracy is still high, and depressed economies are prevalent. How can we expect that broadband data services will exceed voice in a short time in these countries? Therefore, current service realities favor SDH technology.

Still, SDH technology is evolving to adapt to market trends. Clearly, the ability to support data transmission will prolong the life of SDH equipment. New SDH platforms must not only support conventional voice transmission, but also broadband data such as IP and video. This type of SDH platform is called a multiservice transport platform.

The third trend is that next-generation SDH equipment will have many new features. Such features as multiple optical lines, no distinguishing between tributary and aggregation, support of more complex network architectures, and provision of multiple flexible protection strategies are now becoming available. Similarly, equipment designers are working to perfect network and element management and provide easy maintenance. Consolidation of equipment and technologies such as access networks, switchers, and routers will also continue. After investigating such "third generation" SDH 2.5-Gbit/sec systems from different vendors, here's a closer look at what to expect in the way of new developments in SDH technology and equipment.

Large access capacity. The main subrack of a third-generation SDH system often can provide access capacity of 128 VC-4s, where 504 E1/T1s could be directly added and dropped. With an expansion subrack, 1,008 E1/T1s can be added and dropped in total. Such systems can provide a maximum of 16 STM-4 optical interfaces or 40 STM-1 (electro-optical) interfaces. A total of 32 STM-16 optical ports are available as well with some equipment.

The third-generation SDH system could greatly extend the non-electrical regenerator transmission distance through optical-fiber amplifiers, which include an optical booster amplifier and optical preamplifier, to provide various ultra-long-haul transmission solutions.

The configuration of typical third-generation SDH equipment is very flexible. Each network element can be configured as a single STM-4/STM-16 terminal-multiplexer or add/drop-multiplexer (ADM) system or a multi-ADM system with interface combinations of STM-1, STM-4, and STM-16. Crossconnection between multiple ADMs is available.

The optical transmission NMS, which is based on a workstation, carries out the concentrated operations, maintenance, and management (OA&M) for the complex network formed by the third-generation SDH equipment. It realizes circuit configuration and distribution, guarantees secure network operation, and implements system configuration, fault location, and performance supervision.

The third-generation SDH system usually provides two inputs for a -48-V power supply. The power and temperature inside the rack can be supervised and measured.

Since the first SDH/SONET systems were introduced to the telecom network in the 1970s, more than $40 billion of equipment has been installed in networks worldwide. Needless to say, that is a lot of money—and an important resource. On average, the lifespan of SDH equipment can be 20 years. Therefore, this equipment should not be eliminated from the network randomly. With new developments in SDH technology, the SDH network is not only fit for voice services based on circuit-switching, but also should satisfy the increasing amount of data services based on packet-switching for the next several years. So if carriers want to make full use of their existing SDH networks, manufacturers must provide the right equipment that extends SDH capabilities.

SDH is a well-rounded transport technology. Much of the investment in SDH research and development has been repaid already, which means that current SDH equipment and system prices are relatively cheap. For these reasons, many new transport projects usually adopt SDH technology—even when newer transport technologies such as 10-Gigabit Ethernet, resilient packet ring, and DWDM are available.

That is not surprising when we look back at communications history. For example, in 1998, even with SDH already dominant in optical networks, some carriers in Italy and the United Kingdom selected PDH technology for new projects, because PDH equipment was much cheaper than SDH at the time.

If we assume that the market share of SDH/SONET follows a "normal" curve, we could deduce the following: The SDH market began in 1993, its rapid adoption stage was 1997, and its peak stage was 2001. That implies there should still be a large market for SDH technology and systems for the next three to five years. Some other market research has predicted that the SDH equipment and system market space would be $15 billion in 2003. We agree that SDH will be the predominant transport technology for the foreseeable future.