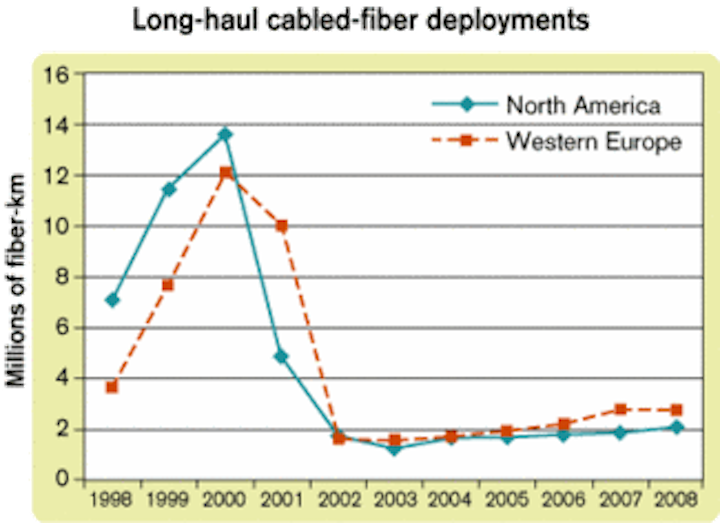 The shift in the fiber-optic-cable industry from long-haul network construction to metropolitan and access networks is behind carriers' preference for smaller-diameter cables that still offer relatively high fiber counts. Many network operators, chiefly incumbents, are still building out parts of their feeder and distribution networks and are faced with limited duct space. That means the high-count, large-diameter cables that were popular only three to four years ago are less apt to be cabled and deployed in today's environment.

The highest-count cable typically used during the optical-network construction boom was either 864- or 432-fiber central/core tube cable that incorporated a matrix of 24-fiber ribbons. The idea behind the central tube construction was its potential for high fiber density, although stranded loose tube designs incorporating 12-fiber ribbons also permitted a count of 864 fibers. The other advantage touted for central tube design is the efficiencies gained when using 24-fiber ribbon splicing machines to lower installation costs. Central tube ribbon cables have been most widely used in the United States, and there have been some installations in Europe. Loose tube cable designs, however, probably account for as much as 80% of all cable deployments worldwide. 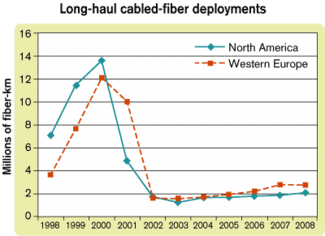 Since the peak activity in optical-network construction occurred from 1998-2000, the largest drop-off in construction has been in long-haul applications, whose cables generally used fiber counts of 96–216, although higher-count cables were installed on some high-traffic routes. And since the innerduct being installed was new, there existed none of the pressure to reduce diameters to cope with congested metro-duct environments. Figure 1 shows the ramp-up in fiber-kilometer deployment in North America and Western Europe during those years and the subsequent sharp decline that occurred in 2001 and 2002. 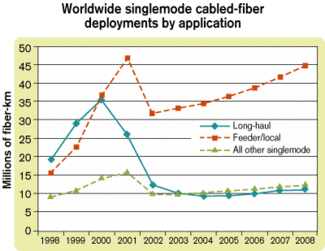 Figure 2. Feeder/local applications are expected to account for 65% of annual cabled-fiber installations worldwide from 2003 to 2008.

Constructing a long-distance network can cost $35,000-$40,000 per kilometer, whereas installing cable in urban areas can be as much as $100,000/km, which means network operators want to take advantage of whatever duct space is available. Further, this duct area is often congested, which means pulling a cable using standard-sized duct is not often practical. One option is to install a system of small-diameter sub-duct made of either polyvinyl chloride (PVC) or high-density polyethylene that permits air-blown installations of cable as needed. Our forecast indicates that feeder/local applications will be the primary focus of fiber-cable deployments, accounting for 65% of annual cabled-fiber installations worldwide from 2003 to 2008 (see Figure 2).

Cable manufacturers have been designing and manufacturing small-diameter cables that can be installed between 1 and 2 km by air-blown systems to meet the requirements of network operators. To manufacture smaller-diameter, lower-count cables, dimensions of many cable components have been reduced. With loose tube-designed cables, buffer tube diameters are now <2 mm, down from about 2.8–3 mm only a few years ago. Smaller buffer tube diameters mean the size of the central strength element also can be significantly reduced and still provide the appropriate lay for the stranded buffer tubes.

Small-diameter central or core tube-designed cables that use ribbon fibers also have been introduced for air-blown installation. Depending on count, a matrix of 6-fiber or 12-fiber ribbons are contained within the central tube. The small diameter precludes the use of linearly applied dielectric or metallic rods common to central tube cable designs and instead uses a combination of dielectric strength elements that helps reduce preferential bending and achieves the anti-buckling capability necessary to install the cable.

These new small-diameter central and loose tube cable designs continue a trend of "less is more" that began in 1998 with SAGEM's introduction of a micro-sheath buffer tube design. Since then, all the top cable manufacturers have introduced a similar cable. The interest in smaller-diameter fiber-rich cables and their benefits for installation in the access network is further evidenced by at least 10 papers that have been delivered since 1999 on the topic at the International Wire & Cable Symposium.

Patrick J. Fay is a senior analyst at KMI Research (Providence), a division of PennWell, publisher of Lightwave.