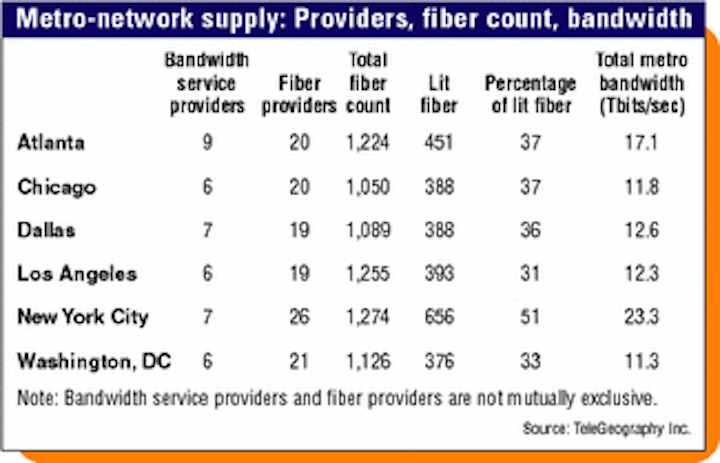 In late January, a group of these survivors, along with a few ILECs, regulators, analysts, and representatives from industry trade organizations such as Comptel, convened for a two-day conference, Metro Connect 2003 USA, hosted by TelCap (United Kingdom).

MANs, typically rings, serve as the intermediaries between the local access and long-haul (LH) transport networks. On average, metro providers connect to 11 points of presence (PoPs) on their core rings, according to TeleGeography (Washington, DC), a research unit of the Band-X bandwidth exchange. The majority of metro providers connect to the key switching centers in each city, in addition to offering various routes connecting to other PoPs.

Legacy SONET/SDH is still the dominant transport technology in metro networks. Interest in Ethernet is high but deployment is minimal due to unresolved quality of service and reliability issues. Like the rest of the industry, capital expenditures on network equipment by competitive metro carriers is at or near maintenance levels.

To compete against the incumbents, which offer higher penetration and much larger network footprints, competitive metro providers need to provision bandwidth and other services faster and cheaper. Today, their business customers are generally interested in multiple protected circuits in smaller bandwidth increments (DS-3/OC-3), waiting to increase bandwidth as needed, rather than leasing the larger pipes of the telecom heyday. The dark fiber products offered by many of these metro providers are still viable. This market has suffered, but not to the same extent as dark fiber leasing in LH networks, which has basically slowed to a halt. Last year, 43% of the metro providers surveyed by TeleGeography offered dark fiber services.

Pricing for metro services has also held up, compared to the nosedive that has occurred in the LH market over the last three years, according to several conference attendees. "There is some downward pressure on metro bandwidth pricing, but margins are holding," says Michael Liss, president and CEO of FiberNet, which specializes in wholesale and metro broadband connectivity within and between carrier hotels in New York City. 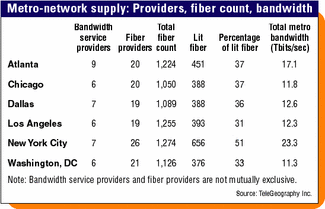 "It is difficult to say anything terribly concrete about metro pricing, and that is simply the nature of the market," observes Stephan Beckert, research director at TeleGeography. "You are looking at building-to-building connectivity, and it is very hard to get comparable quotes between specific buildings in specific cities. A lot of buildings are oligopolies unto themselves, which is why the pricing in the metro still tends to be higher than long-haul.

The so-called fiber glut is also less of an issue in the metro market. "The situation is desperate but not hopeless," says Beckert. "Part of the problem is that a lot of the long-haul carriers are also metro customers, so pain in the long-haul certainly translates back into the metro market. The metro space has obviously been hurting, just on the basis of the number of companies that have left the market. But that being said, the amount of oversupply on the metro side is not nearly as out of whack as on long-haul." 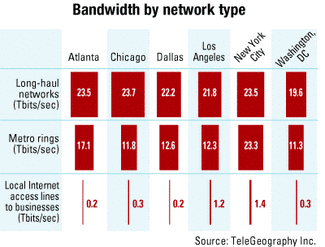 Bandwidth capacity in U.S. long-haul networks is generally greater than in metro networks, even though demand is higher for metropolitan services.

Theoretically, metro networks should have more capacity than LH since most traffic tends to be local—IP content is cached locally and about 90% of voice traffic is local, notes Beckert. All LH traffic by definition is metro traffic, but all metro traffic is not LH traffic.

According to TeleGeography research, however, bandwidth capacity in U.S. LH networks is generally greater than it is in metro networks, despite the fact that the overwhelming demand is for metro services (see Figure). As such, metro rings are expected to reach a capacity saturation point sooner than LH networks. Much of the installed metro fiber is not suitable for DWDM, and a higher percentage of it is lit, compared to fiber in LH networks.