Analysts predicted that 2016 would be the year 100 Gigabit Ethernet (100GbE) finally made a mark in data center networks. LightCounting confirms the validity of those predictions with a report that sales of 100GbE optical transceivers reached $1.15 billion in 2016, up 150% from $460 million in 2015. 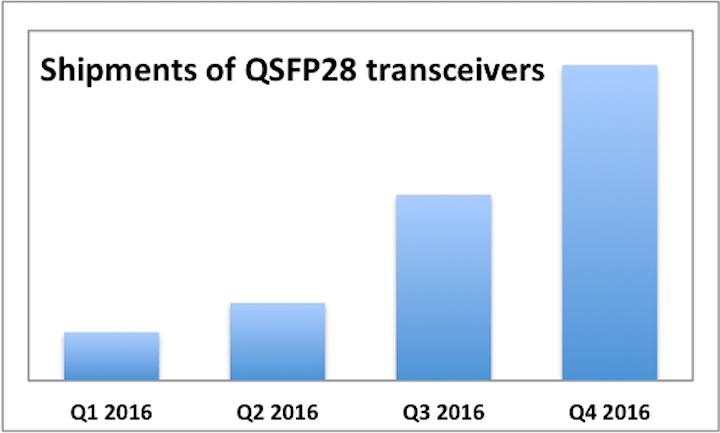 Analysts predicted that 2016 would be the year 100 Gigabit Ethernet (100GbE) finally made a mark in data center networks. LightCounting confirms the validity of those predictions with a report that sales of 100GbE optical transceivers reached $1.15 billion in 2016, up 150% from $460 million in 2015.

The number of units shipped neared 1 million according to the market research firm. This number includes more than 700,000 QSFP28 modules, half of which shipped in Q4 2016 as suppliers began to catch up with demand (see graph above). Applied Optoelectronics, ColorChip, Finisar, InnoLight, Intel, Luxtera, and Source Photonics reported high-volume shipments of these optical modules in the latest round of the LightCounting Market Survey.

LightCounting notes that expectations for 2017 sales remain very high as the construction of new mega data centers and upgrades to the existing facilities should spark continued demand.

The market data will form part of LightCounting's coverage of Ethernet optical transceivers within its upcoming "High-Speed Ethernet Optics Report" due March 31. A preview of LightCounting's quarterly sales database is available to its clients now. The final version of this database will be released on March 16 along with the "Quarterly Market Update Report."