Sales of 100GbE router ports to more than double by 2018: IHS Markit 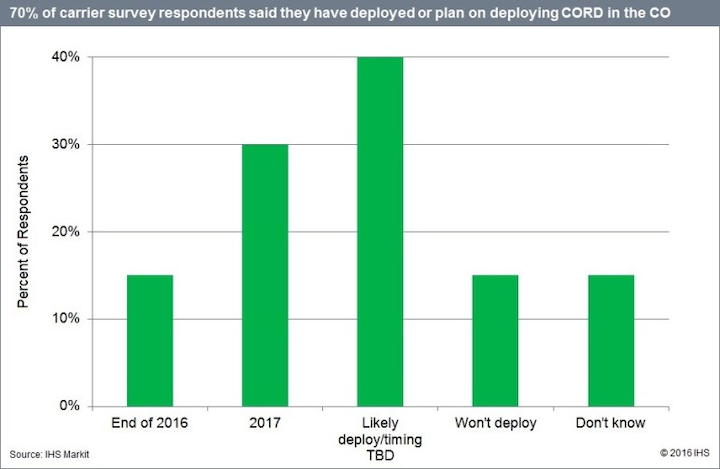 Howard reports that survey respondents indicated that 16% of the 10/40/100GbE router ports fell in the 100GbE category. They expect that total will climb to 38% in 2018, according to Howard. Lowering technology costs will play a role; 88% to 96% of respondents expect 100GbE pricing to be "at parity" with 10GbE (so, 10 times 10GbE prices) this year.

Few operators who responded to the survey indicated they have respondents a current requirement for a multi-layer data/transport control plane. But other potential drivers of software-defined networking and network functions virtualization (SDN/NFV) are emerging. For example, 95% of respondent are using or plan to create smart central offices (COs) by deploying servers and storage to create mini data centers. Such smart COs not only will be used to offer cloud services, but as the NFV infrastructure on which to run virtual network functions (VNFs). And as the chart above illustrates, 70% of these operators plan to employ Central Office Re-architected as a Data Center (CORD; see "ON.Lab, The Linux Foundation establish CORD as formal project") principles in their smart COs. Thirty percent will do so by the end of this year, and the remaining 40% in 2018 or later.

The 25-page 2016 routing, NFV, and packet-optical strategies survey is based on interviews with router/CES purchase decision-makers at 20 global service providers that control 36% of global telecom capex and a third of revenue, IHS Markit says. The survey covers plans for moving router functions from physical routers to software vRouters and VNFs; 100GbE adoption and use of IP over DWDM; router and CES protocols; planned uses of vRouters; plans to deploy packet-optical transport systems versus routers; and metro architectural changes and deployment of CORD in smart COs.

This survey is one of a series IHS Markit has announced recently (see "IHS Markit survey names router and switch vendor leaders").