ICP spending on Ethernet optics to double in 2017: LightCounting

LightCounting says that spending leading internet content providers (ICPs) will spend twice as much on Ethernet optics in 2017 than they did last year. And spending on Ethernet optical modules and related technology will double again by 2022, the market research firm reports in its newly released "High-Speed Ethernet Optics Report." 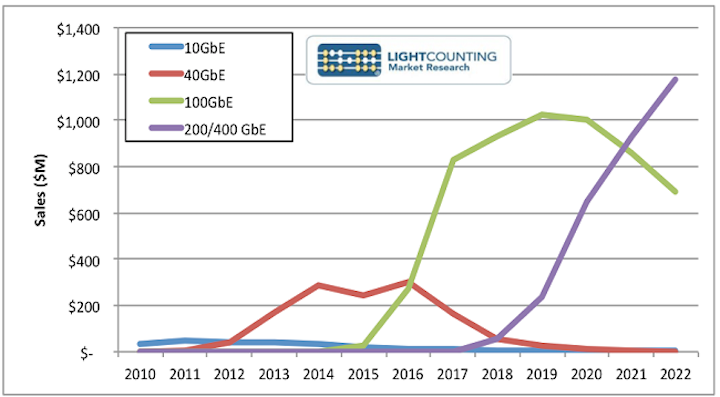 LightCounting says that spending leading internet content providers (ICPs) will spend twice as much on Ethernet optics in 2017 than they did last year. And spending on Ethernet optical modules and related technology will double again by 2022, the market research firm reports in its newly released "High-Speed Ethernet Optics Report."

The four biggest ICPs -- Amazon, Facebook, Google, and Microsoft -- spent approximately $0.5 billion on Ethernet optics in 2016, LightCounting estimates. The market research company forecasts that figure to grow to $1 billion in 2017 and to almost $2 billion by 2022. At that point, the four ICPs will comprise 30% of the global market for Ethernet optical transceivers, LightCounting predicts.

It would be naïve to believe the four companies could sustain a 2X annual increase in their optics spending over the next five years, of course. That uptick derived from traffic growth of as much a 100% annually, as LightCounting said Amazon and Facebook reported to them recently. LightCounting believes the Top 4 ICPs increased the bandwidth of their optical connectivity by 70% in 2016 and will grow such bandwidth by another 90% this year as the 100 Gigabit Ethernet (100GbE) optical module shortages of 2016 abate somewhat. However, the company's forecast for 2018-2022 assumes that traffic growth in mega-data centers will decline gradually and ICPs will use optical connectivity more efficiently, slowing spending growth from its current torrid pace.

Looking at the market overall, LightCounting expects demand for 100GbE optical transceivers will continue to outpace supply until 2018. Meanwhile, the company projects that volume shipments of 200GbE and 400GbE optical modules for mega-data centers will begin in 2019 and 2021, respectively. Putting all these factors together, LightCounting forecasts that the global market for Ethernet optics will increase 18% annually, exceeding $6 billion by 2022.

LightCounting's "High-Speed Ethernet Optics Report" covers the markets and technologies for Ethernet optical transceivers used in cloud, enterprise, and telecom applications. It includes shipment data through Q4 2016, and a forecast for more than 50 Ethernet transceivers segmented by speed, reach, and form factor. Confidential sales data from more than 20 leading suppliers provided the basis for this forecast, the company says.