Despite a decrease in demand for optical communications technology in China so far this year, LightCounting expects optical component and module sales to remain strong in 2017. Robust sales from data center operators should help make up at least some of the slack in China, the market research firm believes. 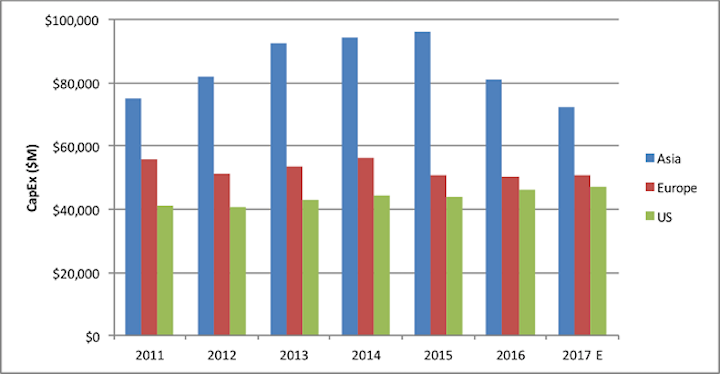 Despite a decrease in demand for optical communications technology in China so far this year, LightCounting expects optical component and module sales to remain strong in 2017. Robust sales from data center operators should help make up at least some of the slack in China, the market research firm believes.

LightCounting notes the fact that Huawei sharply reduced its purchases of optical components and modules during the first quarter of this year. The market research company expects the current quarter to be soft as well, as Chinese communications services providers have slowed their spending, as the chart above illustrates. However, LightCounting points out that sales declines in China began in 2016, a year in which the optical technology market enjoyed robust growth. Therefore, success for optical communications technology isn't necessarily tied to carrier capex numbers, LightCounting concludes, stating that optical network systems account for only 10% of service provider capex on average.

And even if Chinese operators continue to cut back on spending this year, they'll have to make up for it in 2018, thanks to what LightCounting expects will remain aggressive bandwidth demand. The company points to a presentation a representative from China Mobile gave at the OIDA Executive Forum at OFC 2017 in March in which he said that the annual growth rate in network traffic increased from 46% in 2013-2014 to 88% in 2015-2016. Other operators likely are seeing similar growth numbers, which LightCounting believes will lead China Mobile along with China Telecom and China Unicom to spend larger portions of their revenue on capex to keep up. Chinese service providers already have a comparatively high capex-to-revenue ratio of 25% versus 15% for all other telecom operators, in LightCounting's estimation.

Meanwhile, deployment of DWDM networks for data center interconnect continue to growth strongly, according to the market research firm (see "ICP spending on Ethernet optics to double in 2017: LightCounting"). As Amazon and Facebook reported that traffic inside of their data centers is increasing by 100% annually, it's not hard to see why. While intra-center traffic won't grow at that same pace, the rapid construction of new data centers that will need interconnect leads LightCounting to estimate a 100% rate in bandwidth growth for data center interconnect in 2017. LightCounting sees this traffic spike leading to a similar spike in optical technology sales (particularly Ethernet optical transceivers), which will lead to continued overall growth in the DWDM market segment this year.