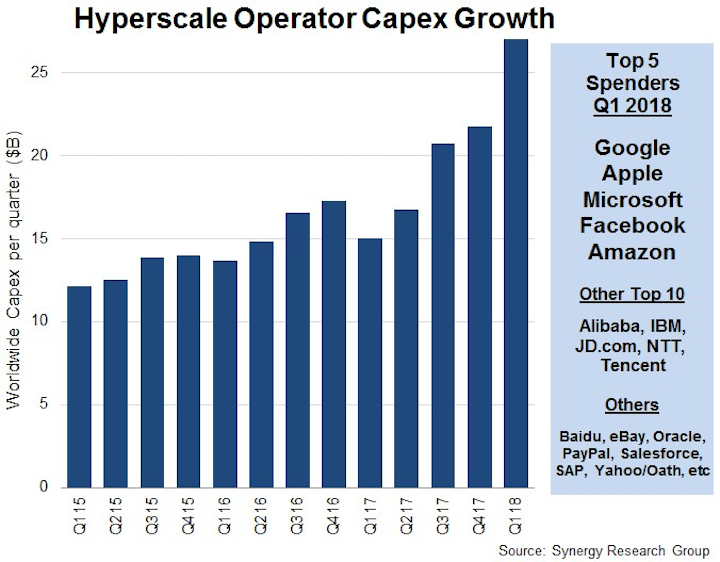 Capex levels at four of the top five spenders were at an unparalleled high in the first quarter. According to Synergy Research, Google, Microsoft, Amazon, Apple, and Facebook make up the top five, despite changes in relative ranking each quarter. In aggregate, this group accounts for more than 70% of hyperscale capex.

"2017 was a standout year for hyperscale capex, but 2018 has started out with some staggering numbers," said John Dinsdale, a chief analyst and research director at Synergy Research Group. "Our detailed quarterly market tracking has consistently shown strong growth in cloud services, SaaS, hyperscale data center footprint, and spending on public cloud data center hardware, but even so these capex numbers took us by surprise. We have long said that this is a game of scale in which most service providers cannot hope to compete; here is some of the clearest evidence yet."

The firm's research is based on analysis of the capex and data center footprint of 24 key cloud and internet service firms. Large operators in IaaS, PaaS, SaaS, search, social networking, and e-commerce are among these major global players.

Alibaba, IBM, JD.com, NTT, and Tencent were among the other leading hyperscale spenders in the first quarter, while Baidu, eBay, Oracle, PayPal, Salesforce, SAP, Yahoo Japan, and Yahoo/Oath were some of the significant players outside the top ten.