According to LightCounting, the optical components market benefited last year from strong sales related to cloud networking, and the market research firm anticipates this segment will remain strong in 2018. Robust demand from key U.S. data center operators for 100GbE transceivers continues, and deployment of the technology by Chinese cloud companies has commenced. 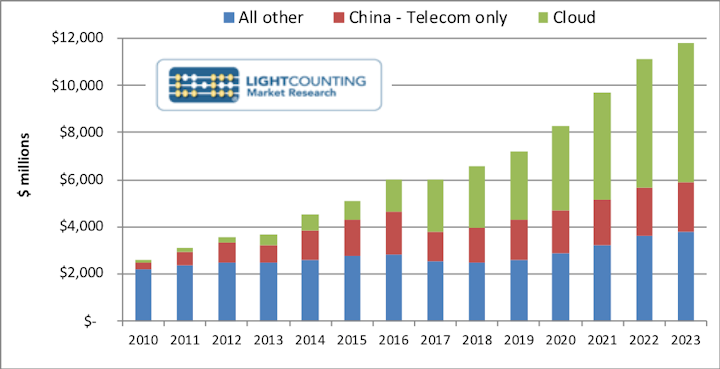 According to LightCounting, the optical components market benefited last year from strong sales related to cloud networking, and the market research firm anticipates this segment will remain strong in 2018. Robust demand from key U.S. data center operators for 100GbE transceivers continues, and deployment of the technology by Chinese cloud companies has commenced. However, the current trade situation between China and the U.S. could put a damper on overall sales in 2018, LightCounting suggests.

Including cloud in China, LightCounting currently forecasts that 400GbE optics sales will expand the cloud market segment from approximately $2 billion in 2017 to over $6 billion in 2023, as indicated in the figure above.

The market research firm states that optics sales to Huawei and ZTE, such as optics sold for Chinese deployments (illustrated in the figure as China Telecom only), were weaker than anticipated and were therefore a primary influence on the 2017 decline in the rest of the market.

Notable drops in sales to these customers was reported in March 2017 by optical component and modules suppliers, which were related to Huawei and ZTE's excess inventory accumulated in 2016. Suppliers report that business remains slower than anticipated with these Chinese customers, despite depletion of the excess inventory by the end of 2017.

LightCounting reports that the latest ban on sales to ZTE of U.S.-made products further complicates the market. In April, ZTE was convicted of failing to comply with the terms of a disciplinary agreement reached in March 2017 arising from U.S. export law violations (see "ZTE: Commerce ban could 'severely impact the survival and development' of company"). Last week, new information on the U.S. Justice Department's criminal investigation of Huawei regarding a potential violation of the same export sanctions against Iran emerged (see "U.S. now investigating Huawei: Reports"). As U.S. government officials travel to Beijing with plans to resolve the trade disputes, ZTE's and Huawei's situation will likely be bargaining chips, as will Qualcomm's NXP acquisition that is pending Chinese approval, LightCounting expects.

Although the ZTE ban could be lifted within weeks, a prolonged trade war is also possible, which would result in a significant decrease in optics sales by U.S.-based companies to ZTE and Huawei in 2018. LightCounting predicts that U.S.-based optic suppliers would be hurt more than their Chinese customers by such an action.

LightCounting's 2018 forecast of optic sales to China is based on the potential resolution of Huawei's and ZTE's situation. The two companies account for nearly 50% of the sales of telecom optical networking equipment worldwide. In the case of a prolonged trade war, project delays would result in a decrease in sales of optics used in telecom equipment in 2018. The recent trade disputes by the U.S government are further indication of Huawei's and ZTE's need to decrease their dependence on Western optics suppliers, says LightCounting. Such an effort is already underway (see "New 5-Year Optical Component Plan from China's MIIT spells trouble for foreign suppliers: Cignal AI").

The market research firm's forecast for 2019 to 2023 does not include components and modules manufactured internally by Huawei, ZTE, and other system vendors. The forecast does include domestic Chinese transceiver vendors, which will pick up most Huawei and ZTE orders for the lower-end (non-DWDM) optics accounting for the global merchant market, LightCounting predicts.

The "Optical Communications Market Forecast Report" presents a market demand forecast through 2023 for optical components and modules used in the Ethernet, CWDM/DWDM, SONET/SDH, Fibre Channel, FTTx, wireless infrastructure, and high-performance computing (HPC) applications. The report also includes an analysis of the business and infrastructure spending of the 15 leading service providers and leading Internet companies, and sales data from 2010 to 2017 for over 30 transceiver vendors. Based on LightCounting's proprietary forecast model, the forecast correlates transceiver sales with network traffic growth and the projected deployments of LTE and FTTx systems for broadband access.