ADVA Optical Networking has again signaled its support of direct-detect modulation as an approach to high-speed data center interconnect (DCI) applications. The company has expanded the capabilities of its ADVA FSP 3000 CloudConnect platform to support 100-Gbps transmission via PAM4 modulation at distances up to 100 km alongside the previous coherent transmission support. 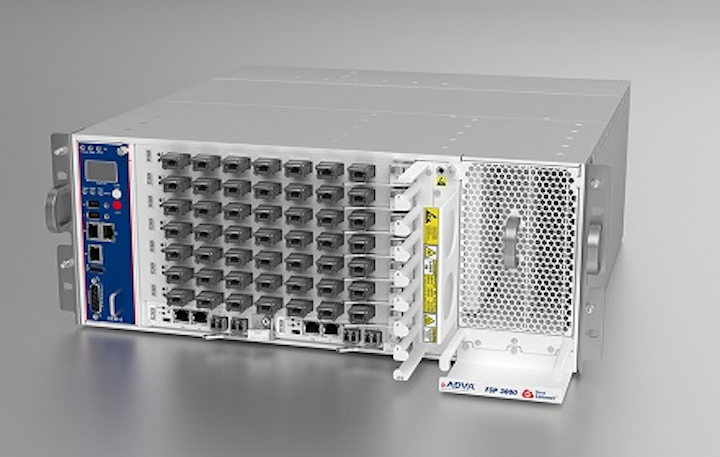 ADVA Optical Networking has again signaled its support of direct-detect modulation as an approach to high-speed data center interconnect (DCI) applications. The company has expanded the capabilities of its ADVA FSP 3000 CloudConnect platform to support 100-Gbps transmission via PAM4 modulation at distances up to 100 km alongside the previous coherent transmission support.

The company's SmartAmp technology forms the centerpiece of the new capabilities. In addition to amplification, SmartAmp offers tunable compensation technology as well as transmission management features. The technology enables network operators to deploy the FSP 3000 CloudConnect portfolio as a disaggregated Open Line System (OLS) or in a complete transport system scenario that includes the terminal and the line system. It will support PAM4 transmission from a variety of sources, including Inphi's ColorZ pluggable 100G optical module designed in collaboration with Microsoft. In fact, as was the case at OFC 2016, ADVA will join with Inphi and Arista Networks at OFC 2017 to demonstrate pluggable PAM4 module capabilities in a DCI environment, this time using the SmartAmp capabilities as an official feature of the FSP 3000 CloudConnect line.

According to Stephan Retteberger, vice president of marketing and investor relations at ADVA, the company is already shipping systems with the SmartAmp technology "in nice volumes" two one customer and is supporting trials with three others. Retteberger wouldn't say who the paying customer is, but ADVA did get Microsoft to provide a quote for the press release that announced the product.

This isn't the first time ADVA has offered support of direct detect for short-reach metro and DCI. The company was among the first systems vendors to embrace the 4x28-Gbps approach as an alternative to coherent at 100 Gbps (see "ADVA Optical Networking offers cost-reduced 100-Gbps for metro networks"). The company found customers for that capability (see, for example, "JSC Fortex deploys ADVA direct-detect metro 100G systems in Moscow"), which undoubtedly emboldened it to proceed down the PAM4 path.