FTTH is evolving past the trial stage 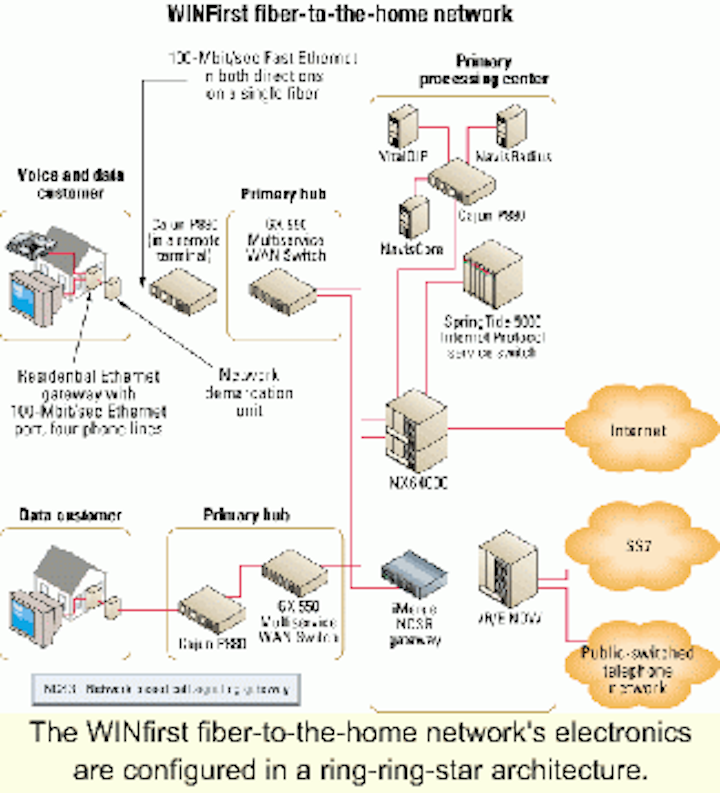 BY DON GALL and MITCH SHAPIRO

For years, fiber-to-the-home (FTTH) architectures have hovered on the brink of commercial reality. Though numerous trials and limited deployments have taken place, economic and/or technical issues have kept FTTH from taking the next big step to broad-based commercial deployments.

One key reason is that incumbent telephone and cable companies have had too much momentum tied up in their legacy networks to make such a radical change-at least not without posing a serious threat to their core business.

Enter, stage right, the new generation of "third-network providers," whose prospects will be tied to how well and how cost-effectively they can deliver new bundled broadband services. Since they are building networks from scratch and, in most cases, aim to deliver greater network capacity and performance than incumbents, these new players have more incentive to pursue new and more aggressive architectures, including FTTH.

One example of these new third-network players is Denver-based WINfirst, which has been aggressively pursuing franchises in several major cities in California and Texas. After considering various options in terms of its network architecture, WINfirst recently announced plans to take fiber to the home in a new hybrid architecture developed in cooperation with Lucent Technologies.

The WINfirst architecture is a dual network composed of largely separate hybrid fiber/coaxial (HFC) and FTTH networks. For the most part, these two networks will be designed and configured separately, sharing only construction labor and fiber-optic-cable sheath where applicable and only limited components of planned customer-premises gateway devices.

Jeff Fishburn, the company's chief technical officer, believes WINfirst's proposed network will be flexible enough to cover all potential lines of business the company might pursue. One reason WINfirst is deploying two networks, Fishburn says, is that even though it is first and foremost a data company, it also plans to deliver television service. Therefore, the question of how the latter can be best delivered needed to be factored into the planning process. The answer, according to WINfirst, is via a "traditional" HFC network.

Since the vast majority of TV sets are analog, it is very cost-effective to deliver basic TV service without needing to place an expensive set-top box on top of every single TV set in the house. At the same time, a new player's competitive prospects might be greatly weakened if it cannot offer consumers the convenience they are accustomed to (e.g., the ability to channel surf) when served by today's analog delivery system. These factors appear central to WINfirst's decision to deploy the HFC component of its network, which will deliver both analog and digitized TV programming. As Fishburn says, "The cable industry has done a good job in cost-reducing network components." 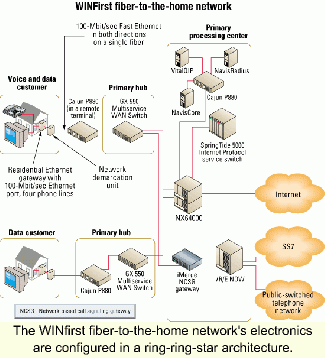 The WINfirst fiber-to-the-home network's electronics are configured in a ring-ring-star architecture.

But when it comes to delivering data and targeted services, WINfirst is taking a different approach than cable operators, which are delivering these new services on their HFC networks. In contrast, WINfirst has teamed up with Lucent to deliver one of the first large-scale deployments of FTTH to date. A key reason is that WINfirst aims to deliver a level of speed and service greater than the "broadband" services available from incumbents. Its FTTH network design is intended to fulfill this goal, while allowing for future upgrades to even higher bandwidths.

WINfirst's HFC network will be a ring-ring-star-bus architecture with a node size of 300 to 500 passings. The coaxial network will be designed using an N+2 (an optical node plus a two-amplifier cascade) bus architecture. The system is designed as a two-way, 860-MHz plant. The forward bandwidth will have an analog tier and a digital-video tier with 300 virtual channels. The return band will only be used for telemetry and set-top billing and control information. All of the other targeted services such as telephony and data will be carried on the FTTH network.

All the electronics in the FTTH portion of the network are being furnished by Lucent in an $800-million deal announced last October. The FTTH electronics are configured in a ring-ring-star architecture (see Figure). At the home, there is a network demarcation unit (NDU) that will be mounted on the outside of the house. It will terminate the fiber optics, provide a 10/100Base-T interface, and provide a grounding point and pass-through for the HFC coaxial network. Power will be provided from the home, with a minimum of four hours (seven hours typical) of battery backup for customers subscribing to telephone services. If the customer subscribes to the telephone service, a second unit will be installed inside the home.

The GX 550 Multiservice WAN Switch, which is the main component of the primary hub, features a scalable, high-capacity switching system with the capability to simultaneously transport multiple carrier services such as private line, ATM, frame relay, Internet Protocol (IP), and voice. The primary ring is terminated in the processing center using both the iMerge network-based call-signaling gateway and NX64000 multiterabit switch/ router. The NX64000 is capable of operating as an IP router, core frame relay switch, or label switch router. It can scale to terabit speeds. The iMerge gateway allows WINfirst to interface with the traditional circuit-based network.

First of all, WINfirst is using only one fiber to deliver both upstream and downstream signals to and from the home. And it is doing that without using a WDM or DWDM scheme. Instead, it plans to use 1,310-nm optical links in both directions on the same fiber using equipment from Ortel, an optical-component supplier acquired by Lucent. The sensitivity of the receivers and their optical isolation from the transmitter allows sufficient signal differentials to successfully transmit on the same frequency in both directions.

A second innovative concept employed by WINfirst has to do with the last-mile construction. Fishburn says he approached the last 1,000-ft fiber-deployment problem from a theoretical perspective, finding practical solutions for the issues. He believes that "never having gotten my fingers dirty" in this case was an asset, which let him look at the various problems from a fresh perspective.

WINfirst plans to pre-connectorize its fiber-optic drop cables with SC/APC connectors. These drops will link the NDUs to mini-splice housings located near the coaxial tap. Drops will be pre-made, and excess fiber will be coiled up and secured. Each splice housing will be pre-terminated using fusion splicing during the construction phase and will serve four to six passings.

According to WINfirst officials, its first construction project, in Sacramento, CA, began last August and is on track. They also report plans to start construction in several other cities in the coming months.

On the other hand, WINfirst believes its combination of high-quality, user-friendly TV service plus its fully symmetrical 100base-T service offering will be the one-two punch that will make its network and business model successful.

As with most pioneers, the outcome is not a foregone conclusion. As we have stated earlier, we firmly believe that some form of FTTH will be the ultimate winner in this brave new world of media convergence and we wish WINfirst luck.

Don Gall of Pangrac & Associates will give a presentation centering on FTTH at Optical Forum 2001 in New Orleans, Jan. 24-26. The conference is being presented by Marcus Evans, and the agenda covers a host of fiber-optic topics.

Don Gall has been involved with the cable-TV industry for the last 28 years. He was an integral part of the team at Time Warner that developed the first practical applications of analog fiber and hfc networks. He is currently a consultant with Pangrac & Associates (Port Aransas, TX) and can be reached at dongall@pangrac.com.

Mitch Shapiro has been tracking and analyzing the broadband industry for more than 12 years. He currently directs the strategic research program of Broadband Markets, which develops and markets proprietary databases, financial modeling tools, and strategic reports focused on the competitive broadband industry. He can be reached at mitch@broadbandmarkets.com.