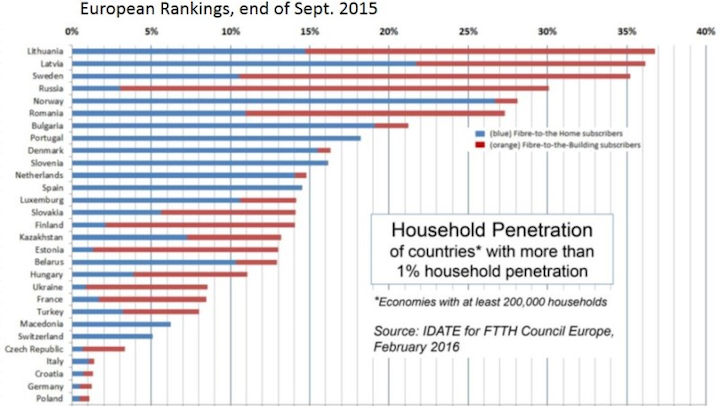 The FTTH Council Europe and its research partner IDATE revealed this week at the council's annual FTTH Conference in Luxembourg that the number of fiber to the home (FTTH) and fiber to the building (FTTB) subscribers in Europe increased by 19% over the first nine months of 2015. In addition, three new countries reached the 1% fiber penetration threshold.

There were more than 35.9 million FTTH/B subscribers in Europe at the end of last September, the research revealed. Homes passed in EU39 countries increased by 17%, to nearly 127 million. Removing the CIS countries (Russia, Kazakhstan, Belarus, and Ukraine) from this total, the European continent had more than 17.9 million FTTH/B subscribers on the European continent at the end of September 2015.

Croatia, Germany, and Poland attained the 1% threshold the FTTH Council uses to track the leading European FTTH/B economies (see chart below). The council pointed to the activities of both private operators and policymakers as keys to the growing success of fiber-optic broadband in these newcomers to the list. 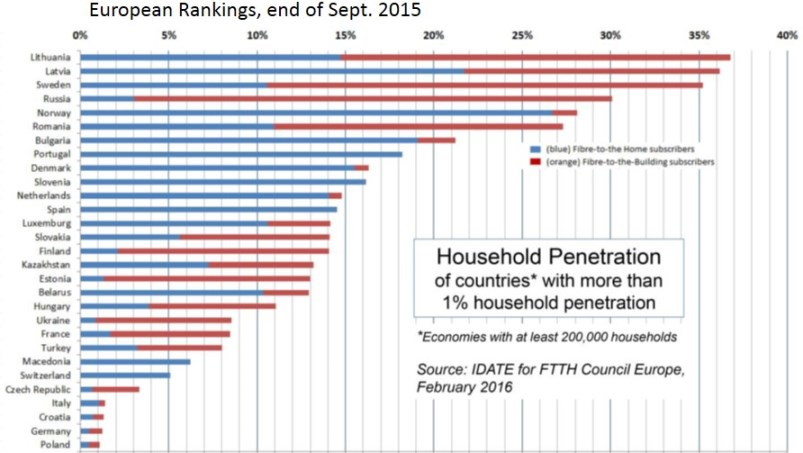 Lithuania retained the number one penetration rank at 36.8%, while Latvia (36.2%) and Sweden (35.2%) have moved up the chart with significant increases in penetration rate since the end of December 2014.

"The year 2015 has seen continued structural growth in fiber rollout throughout Europe, confirming the trend already observed in 2014." said Edgar Aker, president of the FTTH Council Europe. "We are glad to witness such progress, including three new countries entering our FTTH ranking.

"We feel that the European Commission now tends to favor the development of a more ‘fiber friendly' environment," Aker continued. "It is also important to stress the endorsement of fiber broadband by local policymakers, as well as the increase in public-private partnerships. Europe is now well positioned to stimulate FTTH rollout, the only future-proof broadband solution."

However, not every country is onboard with the program. The FTTH Council Europe pointed to Austria, Ireland, Belgium, and the United Kingdom as lagging behind the rest of Europe, as evidenced by their absence from the rankings chart. While the UK added 26,000 FTTH/B subscribers during the most recent forecast period, BT's experiments with G.fast (see, for example, "BT connects first G.fast trial customers") would indicate that it's not ready to make a wholesale commitment to fiber.