For vendors, the optical access space is a good place to be right now, as it has been relatively unaffected by recent market woes. For businesses and residential consumers, however, gaining optical access can be a nightmare. Network providers have spent billions building up the long-haul backbone but have yet to find a cost-effective way to bring that bandwidth all the way out to the end user. As one industry insider notes, "It's like having an interstate highway without any on-ramps." Among the options network providers are currently exploring to bridge this "last mile" gap are passive optical networks (PONs), optical Ethernet, and free-space optics (FSO).

A PON is a point-to-multipoint network that enables service providers to minimize the amount of fiber in the outside plant portion of the network used to interconnect buildings or homes. PONs require two types of interconnected devices: the optical line terminal, located in the service provider's central office (CO) or headend, and multiple optical-network units, which are geographically distributed to buildings, curbs, utility poles, and homes-depending on how close to the user a carrier wishes to bring its fiber infrastructure.

APONs (PONs with an ATM layer underneath to provide quality of service) were first introduced in 1995, driven by large international carriers who were beginning to feel the limitations of SONET/SDH and DSL and wanted to find a single solution for last-mile access.

"They wanted to provide full service but did not want to have a dedicated fiber for each node, for each access building as if it's copper or SONET," explains Dilip Modi, senior product-line manager at Terawave Communications (Hayward, CA). "This is where the point-to-multipoint [architecture] developed. But," he adds, "they also wanted full service. They didn't want just ATM or TDM or just IP or just voice. They wanted a combination of all the good features but have the low-cost networks so you can truly bring optical access economically to the end user."

The Full Service Access Network (FSAN) forum was established to define international standards for fiber-to-the-home based on APON technology, and while members are currently at work to define a standard that is more applicable for fiber-to-the-business, the issue of FSAN-compliance may be less important to today's consumer.

"Standards are not as critical an issue anymore," says Burnie Atterbury, senior director of product marketing at Alloptic Inc. (Livermore, CA). "It's a profitability issue. It's about economic viability."

The need for an economically viable solution for the access space has led to the development of an Ethernet-based PON (EPON). Ethernet is less expensive than ATM and is already widely deployed in LANs. Today's carriers, says Modi, are asking, "Why put ATM overheads onto the network? Why take IP traffic and convert it to ATM? Why couldn't we get IP QoS [quality of service]?" Though there is a great deal of interest in EPON-and a move to develop standards for it in the IEEE Ethernet First Mile Group-it is still very much in the development stages.

Don't expect a big ATM-versus-Ethernet debate to develop in the PON space, however. According to Jeff Gwynne, senior vice president of marketing at Quantum Bridge (Andover, MA), the toughest part of the PON is the optics; what protocol you run on top of the network doesn't make much difference.

"If you argue about EPON and APON, you're arguing about the wrong thing," he says. "It's really how do you provide low-cost services to end users and how do you help service providers get the stuff in the ground and start making money.

Alloptic's Atterbury agrees. "We will typically talk to the service providers and say, 'Let's step past the religious argument of ATM versus Ethernet, and let's look at the return on investment,'" he asserts.

PONs support four architectures: fiber-to-the-curb, -business, -home, and -cabinet. While widespread deployment of such architectures could be decades away in some cases, both fiber-to-the-home and fiber-to-the-cabinet have enjoyed an increase in popularity over the last six months.

Fiber-to-the-home remains a slow-to-rollout market and may, in fact, be several decades away from becoming a widespread reality, claims David Gross, senior optical-networking analyst at CIR Inc. (Charlotteville, VA). "I am actually kind of surprised how much vendors are still talking about it and how little service providers are interested in it," he admits. "It is certainly happening, but where it is happening is typically not in an area that is serviced by an ILEC [incumbent local-exchange carrier] or an MSO [multiservice operator]."

"Where I live is a way overpriced little town," admits Atterbury. "Thirty miles away, you could get a house much nicer than mine for about half the price. But people don't want to commute. So what is that community going to do to encourage people to move there and to upgrade their existing tax base to bring their community more into the limelight?" he asks. "They're going to deploy fiber."

The Federal government has hastened this deployment, establishing a broadband act designed to subsidize such deployments in rural communities. According to Atterbury, there are more than 700 municipalities in the U.S. currently at various stages of fiber-to-the-home.

"This is taking off much more quickly than we would have anticipated, because it's not based on your typical corporate return-on-investment fundamentals," he asserts. "It's based more on communities saying, 'I am frankly ticked that because my community only has 30,000 residents and we're a little more rural than other communities, the ILEC is not deploying fiber.'"

Fiber-to-the-cabinet has also seen a surge in the last six months or so. "There's been a lot of effort recently put into using passive optical networking as an infrastructure play that is going from a CO, or headend, out to some type of remote cabinet to feed some other access technology, like DSLAMs [DSL access multiplexers]," asserts Gwynne.

"For example, say you have DSL service to your home, but it's limited because the central office is 10 to 14 km away from your home," explains Modi. "So the bandwidth you get is limited to maybe 144 kbits. If [service providers] want to get real broadband service to the end user, the DSLAM needs to be within 3 km from the end user. So what they are doing now is using PON as a backhaul and moving the DSLAMs from the central offices to the outside cabinets, which puts them closer to each service area."

According to Modi, fiber-to-the-cabinet is moving faster than fiber-to-the-business, with fiber-to-the-home running a distance third, in terms of where the market is today.

Also emerging as a viable candidate in the access space is optical wireless or FSO, which provides fiber-like capacity without the need to secure permits or trench city streets. FSO technology transmits optical signals from rooftop to rooftop and through windows using beams of light in the unlicensed terahertz spectrum. Though still a nascent technology, FSO is catching on as both a standalone solution and as a way to extend the reach of fiber in PONs.

"There is growing interest among competitive service providers in FSO," claims Gross. "Especially some of the smaller service providers like Tellaire and Expedient who are taking the approach that, 'Look, there's just not that much fiber out there to connect to buildings, but there's plenty of fiber once you get a mile or so away from the customer premises.'"

In the past, the reliability and availability of FSO solutions has come into question; inclement weather-particularly thick fog-wrecked havoc on early solutions. But those questions have all but subsided, claim FSO manufacturers, thanks to technological advancements and a better understanding of the physics involved. Carriers are beginning to see FSO as a viable option-particularly for links that are 500 m or less and have near-perfect availability.

Over the last four or five years, carriers were making huge footprints. "They called it 'Field of Dreams'-if you build it, they will come. It wasn't a very smart build," explains Michael Sabo, senior vice president of marketing at AirFiber Inc. (San Diego). "Then they began to run out of capital. Now, they see free-space optics as able to do just the opposite. They can go into a building and sell before they even have service. If they have takers, what they can do is deploy our product and form it into a service very quickly."

Analysts at CIR predict that the market for 500-m FSO links will grow to $330 million by 2005, buoyed by carrier deployments as well as a growing compatibility with the PON segment.

For PON vendors like Quantum Bridge, FSO solutions are just another tool in their toolbox. "We can help them go to MTUs, fill gaps in PoPs [points of presence], and further extend the geographical coverage of their PON network," claims Baksheesh Ghu man, chief marketing officer at LightPointe (San Diego). "That's the underlying value proposition behind the PON/FSO relationship: to extend the geographical coverage of PONs, to provide all the benefit of PONs in an extended area."

The FSO vendors are confident that the technology will continue to see significant deployments, both domestically and internationally, despite the current market. "I think actually that this downturn of the telecom industry has really pushed [FSO] to the forefront," claims Sabo.

"The carriers realize that they can get to revenue quicker and not strand capital. A year ago, you could have told them that, but money was cheap. And now, they panic. Now they see this as the disruptive technology it was designed to be." Sabo adds that the second half of 2001 may well be "when free-space optics really breaks out." 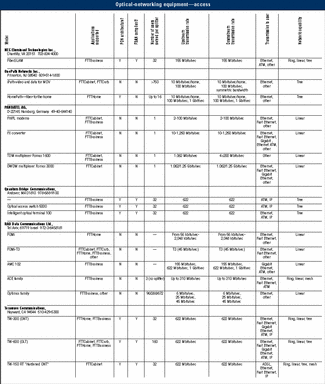