The competition after deregulation combined with the new service opportunities provided by emerging fiber technologies is fueling an evolution from telecommunications to broadband networks. This network evolution is taking place in three distinct areas: the access infrastructure, which aggregates subscriber connections; switching and management, which provides service intelligence; and the backbone, which transports traffic between central offices or exchanges.

Most agree that the demands placed on communications networks will increase dramatically in the next decade. The number of business subscribers using broadband services is already growing exponentially (see Figure 1). This trend will eventually lead to connectivity that is comparable to the current phone system. Broadband service demands can only be met by fiber optics reaching all the way to the subscribers' premises.

For access network operators, deploying point-to-point optical fiber from exchanges to each business subscriber involves too much capital outlay. The biggest challenge is finding a cost-effective solution that supports today's services and facilitates the transition to the broadband era.

Figure 1. The number of business subscribers using broadband services is already growing exponentially. This trend will eventually lead to connectivity comparable to the current phone system.

Today, access network operators are increasing capacity by deploying more fiber and replacing copper transport infrastructures and systems with fixed-capacity fiber-based systems such as SONET/SDH. It is important to realize that laying new fiber or upgrading existing SONET/SDH networks is not always viable for the following reasons:

Merely increasing the number of fibers and the corresponding termination equipment also requires managing the SONET/SDH devices as well as fiber-facilities installation, turn-up, testing, etc. Therefore, taking advantage of available duct space to pull more fiber is a temporary reprieve, not a solution. Eventually, the end solution must be a new form of access networking.

In the access arena, economics is the major driver. At some point, multiplexing multiple optical channels over a smaller number of facilities makes more economic sense than terminating equipment over direct facilities from central offices or exchanges. The improved economics stems from the lower costs of the multiplexing equipment and the facilities' operation. 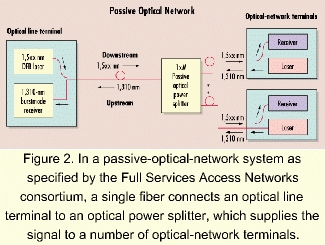 Figure 2. In a passive-optical-network system as specified by the Full Services Access Networks consortium, a single fiber connects an optical line terminal to an optical power splitter, which supplies the signal to a number of optical-network terminals.

Not surprisingly, the debate surrounding DWDM has focused on the economics of long-haul DWDM technology that is scaled down to meet the needs of metro/access operators. In the access network, the costs of network build-out, maintenance, and operations are amortized over a smaller number of subscribers. At the same time, capacity in the access network is provisioned in a more granular fashion.

These economics have led many to mistakenly believe that DWDM technology is not appropriate for metropolitan networks, except in specific areas of fiber exhaust between central offices or exchanges. It is not fiber exhaust, however, that will bring DWDM to the access network, but rather a more efficient, flexible, and economical form of access networking.

Passive optical networks (PONs) offer several advantages compared to active optical/electrical (O/E) systems such as low cost, high reliability, and the absence of maintenance requirements at intermediate network points. In the PON system as specified by the Full Services Access Networks (FSAN) consortium, a single fiber connects an optical line terminal (OLT) to an optical power splitter, which supplies the signal to a number of optical-network terminals (ONTs). The FSAN specification for a PON has a range of 20 km and supports up to 32 splits (see Figure 2).

The OLT typically resides at a hubbing point such as a central office or building's point-of-presence (POP) and provides point-to-multipoint connectivity with ONTs. The ONTs supply the communications drop interfaces to corporate subscribers. The terminals are installed on or near the subscribers' premises in the telecommunications equipment closet or with local-area-network (LAN) servers.

For most applications, there are no intervening elements between the OLTs and the ONTs. The elimination of active elements between the OLT and ONTs reduces the need for costly power consumption, rights-of-way, and ongoing maintenance of electronics equipment. In addition, the point-to-multipoint connectivity of a PON lowers the fiber congestion at the OLT site, and allows equipment cost amortization across a large number of subscribers. The PON can use either a single power splitter or cascaded power splitters as branching devices for OLT-to-ONT communications. In addition, PON access systems offer the following key advantages:

The ability to carry varying bit rates on different channels in the same fiber is important within the metro area, since subscribers are generating a wide variety of services and bit rates. The bulk of the ultra-broadband (i.e., Gigabit Ethernet) traffic is from the ONT to an external router or backbone node outside of the PON facility. The alternative approach of simply adding more fiber carries with it an exponential increase in overall network complexity that will eventually bog down operations.

Observations based on today's access networks have shown that only 10% of ultra-broadband data traffic will remain between ONTs on the same physical PON facility. So initially, the market will require point-to-point DWDM overlay channels between an ONT access node and the OLT. A problem that has attracted some attention is how to provide transparent LAN services (up to gigabit speeds) over large campus and metro networks. An attractive protocol stack is Internet protocol/Gigabit Ethernet-media access control/Gigabit Ethernet-physical layer/DPO. This protocol stack does not involve SONET/SDH or ATM-just IP, Ethernet, and DPO technology. 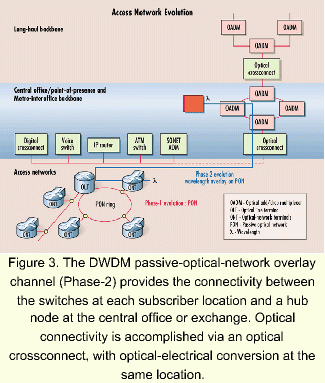 Figure 3. The DWDM passive-optical-network overlay channel (Phase-2) provides the connectivity between the switches at each subscriber location and a hub node at the central office or exchange. Optical connectivity is accomplished via an optical crossconnect, with optical-electrical conversion at the same location.

The DPO virtual channel provides the required connectivity between the Gigabit Ethernet switches (or Layer 3 switches) at each subscriber location and a hub node at the central office or exchange. Optical flow-through connectivity can be accomplished via an optical crossconnect, with O/E conversion at the central office or exchange (see Figure 3).

DPO O/E conversion is also required in access applications to prevent accumulation of transmission impairments. Not all fiber is created equal, and older access network fiber may be more prone to transmission difficulties. This O/E conversion will likely be implemented at central offices (exchanges) or major PoPs.

The DPO approach provides flexible and seamless optical-fiber-gain benefits in the form of tangible expense savings. For example, the average value of a 5-mi access fiber facility is about $12,000 in its first year, when no rights-of-way or construction is considered. For all practical purposes, that is the installed first cost of "lighting" a single strand of fiber cable when the cable is already in the ground. The lighting activities include optical time-domain reflectometer (OTDR) testing, splicing, connectors, polishing, optical distribution frame connection, and occasional troubleshooting.

The $12,000 value gives a baseline for comparing the process of lighting preinstalled fiber cables versus provisioning DWDM channels on PON access equipment. The DPO equipment should cost less than $12,000 per additional wavelength. Below this price, it is more economical to provision a DWDM wavelength than to turn-up another fiber strand. Therefore, products need to be specifically tailored for the access market, including equipment management functions.

The DPO technology has the inherent benefit of reusing the existing PON fiber facility for ultra-broadband services on a per-subscriber basis. For example, a base PON could be at one set of wavelengths, any number of virtual PONs at another set of wavelengths, and any number of per-subscriber ultra-broadband (e.g.,10-Gbit/sec) services at yet another set of wavelengths. Since additional DPO channels are only provided when and where needed, this approach closely matches many network operators' "pay-as-you-grow" business models.

DPO channels are allocated in a standard manner, to ensure low costs and interoperability of existing equipment. The conventional C-band (around 1,550 nm) corresponds to the low attenuation point in fiber. It is also the point where passive components, active devices, and optical amplifiers are readily available. Currently, wavelength spacing of 200 GHz is the most economical solution to provide 16 wavelengths in the C-band.

As the spacing decreases (i.e., 100 GHz, 50 GHz), the cost increases-considerably. Therefore, these technologies are currently limited to DWDM applications in long-haul networks. With the advance of DWDM technology in the backbone, the capacity in the optical access arena will increase. DPO technology supports both 2R (regeneration and reshaping) and 3R (regeneration, reshaping, and retiming) channel regeneration.

Access networks consist of a diverse range of architectures, bit rates, traffic patterns, and protocols. The ability to flexibly allocate capacity to multiple points in the access network is a key success factor for local network operators. In this environment, flexible access topologies include rings, stars, and trees.