Next gen PON struggles for traction

One reason PON has proven so popular in optical access networks is its reputation as a "futureproof" technology, one that promises to support operators' evolving requirements. 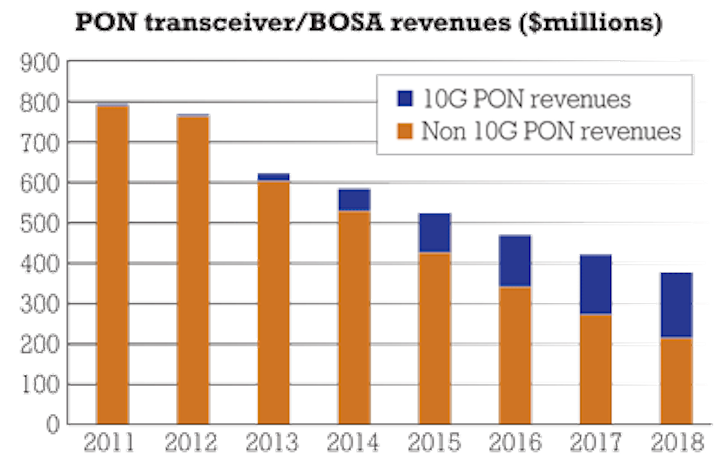 One reason PON has proven so popular in optical access networks is its reputation as a "futureproof" technology, one that promises to support operators' evolving requirements. But it has also proven futureproof in another sense: The current generation of GPON and EPON technology refuses to give way to any successors.

"One would think that by this point in time, given standard amortization and depreciation rates of network equipment, that you would start to see an upgrade cycle," offers Jeff Heynen, principal analyst, broadband access and pay TV, at Infonetics Research. "And we haven't seen that."

The reasons for this lack of interest in the next generation of PON technology are simple to understand. But they have created an environment that could make an eventual decision on what comes next more complex.

The poor traction of 10G PON of any sort initially surprised vendors, too. Frank Effenberger, Huawei Fellow and vice president, Access R&D Department, Network Product Line, for Futurewei Technologies, recalls operators expressed significant interest and support while the IEEE developed 10G EPON specifications and the ITU-T, with support of FSAN, tackled 10G GPON under the rubric of XG-PON1 (10 Gbps downstream, 2.5 Gbps upstream) and XG-PON2 (10 Gbps symmetrically). Systems providers dutifully developed prototypes that carriers such as Verizon and Portugal Telecom happily tested. Based on the results of the tests, commercial systems ensued -- to little response so far.

The principal barrier to deployment of 10G PON is probably the most difficult to overcome. "The simple reality is that GPON today gives you plenty of bandwidth for residential deployments, even for business services," explains Stefaan Vanhastel, marketing director for wireline fixed access at Alcatel-Lucent.

The same statement can be made for EPON as well. The advancing tide of 1-Gbps services isn't likely to change this scenario anytime soon, Effenberger and Vanhastel point out.

"It's rather difficult for a residential subscriber to continuously fill a 1-Gbps pipe," Vanhastel explains. "So I think it's a fair assumption from service providers offering 1-gig services that they mainly need to support 1-gig peak speeds and not necessarily a sustained 1-gig speed for every single subscriber, non-blocking."

Even if the amount of sustained bandwidth were to climb, most carriers could simply adjust their split ratios, asserts Ovum's principal analyst for components, Julie Kunstler. Based on her calculations, as well as discussions with service providers, Kunstler reports most PONs aren't operating at anywhere near their maximum split ratios.

Cost, of course, also plays a role. Effenberger points out that the popularity of EPON and GPON have reduced equipment costs at a pace 10G PON can't match, particularly given 10G PON's limited deployment volume. Vanhastel estimates the cost per subscriber for XG-PON is about 20% more than for GPON.

The lack of traction for 10G PON has allowed two factors to create uncertainty about future technology directions that further complicate the next gen PON decision. The first is the development of an alternative to 10G PON -- WDM-PON, particularly the TDM/WDM hybrid for which the ITU-T is developing specifications within its NG-PON2 effort.

While PONs already use multiple wavelengths -- one each for upstream and downstream traffic, with possibly a second downstream wavelength added for RF video -- WDM-PON takes the multiwavelength concept further. In a classic WDM-PON architecture, each CPE receives its own wavelength. Such an arrangement offers the utmost in dedicated bandwidth. It also offers the utmost in per subscriber cost, which is why the carrier members of FSAN backed the hybrid approach that combines WDM's multiple wavelengths with GPON's support of multiple subscribers by each of those wavelengths. Specifications for the architecture, most commonly referred to as TWDM-PON, likely will support as many as eight wavelengths of 10 Gbps each, although Vanhastel expects initial TWDM-PON systems will only support four.

The 40-Gbps capacity may not be those first TWDM-PON systems' primary benefit. "I think the first consideration is the flexibility; it's the fact that you can use different wavelengths for different applications," offers Vanhastel. "You could also wholesale one of those wavelengths to a different service provider. That can be interesting in countries where you have to provide access to your fiber infrastructure to other service providers as a way to unbundle."

The proposed TWDM-PON wavelength plan nestles alongside the wavelengths GPON uses, which means clean upgrades via overlay. Operators can follow a pay-as-you-grow approach, adding one wavelength at a time to existing GPON infrastructure as demands require.

This graceful migration feeds into the second point of uncertainty facing some network planners -- whether to stick with EPON or move to GPON. The IEEE currently isn't working on WDM EPON. And while EPON leveraged the overall 1-Gbps Ethernet embedded base to offer low capex, that head start isn't as pronounced at 10 Gbps. With GPON deployments catching up to EPON, the cost difference between the two technologies continues to shrink, too.

"I think there's some concern about the long-term viability of EPON as a technology, with even China Telecom and China Unicom having switched over a greater percentage of their purchasing to GPON," Heynen says. "Does that mean that EPON is stranded as a technology? I'm sure that consideration is being made by operators in Japan and Korea and elsewhere, maybe even cable operators."

Those cable operators, especially in North America, have long been seen as unified EPON supporters, particularly for business services provision that leverages Cable Labs' DOCSIS Provisioning of EPON (DPoE) specifications. However, that unity appears to be wavering, based on the number of GPON installations cable operators have pursued. "If you had asked last year which way maybe [cable] operators would go, I would have definitely said EPON and follow up with 10G EPON," Heynen offers. "But I don't feel that way anymore, just given the mix of technologies."

What is it good for?

All this is not to say that there isn't a use for 10G PON. China Telecom has deployed 10G EPON to support fiber to the building, Effenberger reports. Alcatel-Lucent has announced U.S. cable operator Bright House Networks as a customer for its DPoE technology, which supports symmetrical 10-Gbps data rates; Vanhastel adds that his company has more DPoE customers than just Bright House.

Bright House will use the 10G technology for business services. And if 10G PON is to find a niche for itself, business services will likely be the driver, Ovum's Kunstler says. "If I look at where 10G is being deployed and where I'm getting the most inquiries around 10G from service providers, it's coming from business services -- with mobile backhaul included in ‘business services,'" she explains.

Finally, Heynen notes that a technology currently cast as a threat to PON -- G.fast -- may actually prove a boon. G.fast promises gigabit speeds over copper infrastructure, but at very short link distances. Fiber will need to be installed deep into access networks to support G.fast fiber to the distribution point (FTTdp) architectures.

"I think XG-PON1, for this FTTdp and G.fast, as a backhaul technology, I think it's very well suited for that. And the timing works out well from a cost perspective," Heynen theorizes.

WDM-PON, meanwhile, has been offered as a business services option from a variety of equipment suppliers as well, with multiple deployments reported.

The fact that TWDM-PON products probably won't reach the market until 2015, according to Vanhastel -- and perhaps not until 2016 or later, in Effenberger's view -- gives 10G PON more time to become established in carrier networks and proceed down the cost-reduction curve. Yet the fact that TWDM-PON systems are at hand may help relegate the technology to niche application status.

The capacity expansion potential of current GPON and EPON systems remains the most significant hurdle to wide-scale deployment of 10G PON, however -- as well as TWDM-PON and basic WDM-PON. Effenberger, for one, believes current PON infrastructures, particularly GPON, won't run out of capacity on a significant scale until at least 2020.

Which may not have been the kind of futureproofing vendors would prefer.