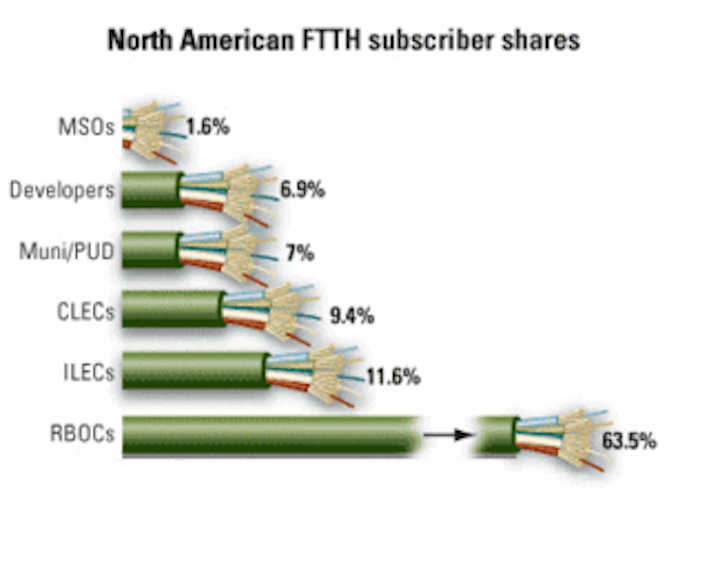 The fifth annual FTTH Conference, held October 2-5 in The Venetian Hotel Casino Resort in Las Vegas, saw a record number of attendees and exhibitors. With 2,100 people attending the event, the growing number of participants reflected the burgeoning state of fiber to the home in North America and the progress optical access technology has enjoyed around the world. Subscriber numbers and take rates are up in the United States, ADSL subscriber numbers have started to drop in China because of optical competition, and European incumbents finally show signs of following the lead of fiber-savvy municipalities. Meanwhile, with higher-speed technologies such as GPON readying to make an appearance in Verizon’s network, the industry has already begun to ­discuss the ­capabilities the next ­generation of equipment will be expected to provide. 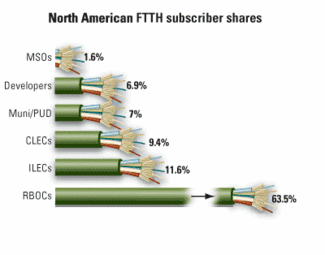 The RBOCs dominate the subscriber landscape in North America, according to Render Vanderslice & Associates.

FTTH continues to build momentum in North America, according to Michael Render of Render Vanderslice & Associates (www.rvallc.com). Render’s most recent research, which he presented at the conference, indicates that the number of North ­American homes connected to FTTH networks reached just over 1 million in September, while the number of homes passed exceeded 6 million. While the connected home figure represents only 1% of the North American market, it marks a 213% growth rate from the same time last year. Overall take rates climbed to 20.4% in September, up from 18% at the same time last year. This figure represents a decline from the peak of 41.3% two years ago, which Render said represents the effects of the comparatively large number of homes Verizon has passed but not acquired. Non-RBOC take rates average 52.4%, according to his figures. That said, RBOCs serve 63.5% of the connected homes. (See figure for a breakdown of market share by server type.)

Render added that while the RBOC preference for PON is well known, active Ethernet switched optical network infrastructures hold the largest market share among the remaining North American carriers, with 34%. BPON follows with 28%, EPON 21%, and GPON fourth at 18%.

Verizon (www.verizon.com), of course, dominates the U.S. market. The carrier briefed Wall Street on its FiOS progress the week before the conference, and Bob Ingalls Jr., chief marketing officer at Verizon Telecom, brought similar figures to the attention of attendees in Las Vegas. The company had passed 4.4 million homes and businesses in 16 states as of the second quarter of this year, with a goal to pass 6 million by year’s end and 18 million by 2010. Ingalls says Verizon enjoys an approximately 15% penetration rate for its Internet service and hopes to have 175,000 video customers by the end of the year.

The next day, David E. Young, vice president of federal regulatory affairs for Verizon, amplified Ingalls’ comments. Verizon currently has a 10% penetration rate for video, which the company expects to grow to 20% to 25% by 2010; Verizon hopes Internet service penetration will reach 30% to 40% over the same time frame. As of August, the cost to pass a home stood at $873, with connecting a home adding an additional $933. Verizon expects those figures to drop to $850 and $880, respectively, by the end of the year. Meanwhile, net maintenance is 80% better for the fiber plant than for the carrier’s copper infrastructure, Young revealed.

AT&T (www.att.com), the other RBOC that has decided to deploy FTTH-although currently only in greenfield applications-expects to reach 1 million customers with its PON architecture by 2008, said Jeff Weber, vice president, product and strategy at AT&T Operations Inc. The company expects to roll out its Project Lightspeed infrastructure, which combines FTTH with fiber-to-the-node (FTTN), in 15 to 20 markets by the end of this year.

Wall Street’s favorable reaction to Verizon’s update, combined with delays in AT&T’s FTTN-dominated Project Lightspeed rollout, have led some to question whether the criticism Verizon received for the larger initial costs of its rollout may have been unjustified. Verizon’s FTTH approach should support more bandwidth than AT&T’s FTTN, and conjecture has arisen that the FTTN infrastructure may have trouble supporting competitive services.

Speaking at the “FTTX and Video Service Provision” market workshop sponsored by Lightwave and KMI Research, Yankee Group’s (www.yankeegroup.com) Vince Vittore advised that, at a minimum, service providers should plan their networks to support one high-definition video stream (at 8 Mbits/sec using MPEG-4), two standard-definition video streams (3 Mbits/sec combined), a mid-level Internet connection (3 Mbits/sec), and voice (approximately 1 Mbit/sec). That adds up to 15 Mbits/sec, which AT&T says it should be able to support in its initial rollouts. However, Vittore predicts that demand for additional high- and standard-definition video streams to support digital video recording in multiple rooms as well as higher-speed Internet access to compete with the eventual MSO deployment of DOCSIS 3.0 technology will require bandwidth rates of 38 to 50 Mbits/sec over the next 5 to 6 years. This rate could push the limits of the VDSL2 technology AT&T will use in its FTTN connections.

Colin Dixon, IP practice manager at The Diffusion Group (www.thediffusiongroup.com), underscored the importance of competitive service offerings to attendees of the same workshop. The Diffusion Group has researched consumer receptivity to telco-provided video services. According to Dixon, given equal service levels, a price only $5 lower than the MSO competitor’s could result in a take rate greater than 20% for telephone companies.

Outside of North America, optical access technology continues to make inroads versus copper-based approaches, particularly in Japan. Hiromichi Shinohara, vice president, director of the Access Network Service Systems Laboratories at NTT (www.ntt.co.jp), reported that ADSL subscriber numbers began to decline this past March. He predicts that the number of FTTH subscribers will exceed ADSL subscribers by the end of next year. This trend is due in part to the fact that many carriers are switching from ADSL to FTTH, rather than upgrading their copper infrastructure with higher-speed technology such as VDSL2. Shinohara put the number of FTTH subscribers in Japan at 6.31 million as of June 2006. He forecasts 30 million such subscribers by 2010.

Shinohara reported that NTT currently uses both BPON and GEPON technology, depending in large part upon the level of service required, with NTT’s GEPON-enabled Hyperfamily service offering symmetrical 1 Gbit/sec to subscribers for video on demand and a video telephony service, plus a video service it offers through a partnership. (NTT is forbidden to offer its own video service by Japanese law.)

NTT has already begun to think about the next generation of FTTH technology. Shinohara says that the carrier is unlikely to use a 10-Gbit/sec EPON approach, largely because the carrier is loath to support three different architectures. WDM would provide a more natural evolution from the current BPON and GEPON infrastructures, Shinohara said. He predicted that NTT will use a WDM access approach which, in later comments, he distinguished from current WDM PON technologies. The WDM access approach would leverage a power splitter, he said. The deployment of such a technology would require the development of “colorless” optical network units (ONUs) capable of accepting a range of wavelengths. Shinohara believes that NTT will look at WDM architectures that range to as many as 64 wavelengths. However, he doesn’t expect NTT to require the rollout of WDM for another 3 to 5 years.

Elsewhere in Asia, Korean organizations traveled to Las Vegas to tout next-generation capabilities of their own. The Korea Advanced Institute of Science and Technology (photonet.kaist.ac.kr) offered a presentation during the event’s poster sessions that highlighted its work on WDM PON and the type of colorless ONUs that Shinohara referenced earlier in the conference. The WDM technology, which relies greatly on the development of a broadband light source in the optical line terminal located in the central office, is part of the approach that Novera Optics has deployed in Korea and introduced in the United States. (See “Industry Mulls over WDM-PON Technology,” Lightwave, August 2006, page 1.)

However, the Electronics and Telecommunications Research Institute (ETRI; www.etri.re.kr) in Gwangju, Korea, has offered a potentially competitive approach, based on TDMA. ETRI says that its 10-Gbit/sec TDMA PON will enter field trials in Korea in 2008. The TDMA PON supports asymmetric data rates of 10 Gbits/sec downstream and 1.25 Gbits/sec upstream. ETRI foresees fully symmetric 10G TDMA PONs in the future.

As reported elsewhere in this issue (see “Europe’s Lagging FTTH Market a Hot Topic at ECOC” on page 1), European carriers are seen to be adopting FTTH more slowly than their Asian and North American counterparts. However, incumbents have at least begun to trial the technology. Gilles Coullon, vice president, Network and IT Division, Very High Broadband, at France Telecom (www.francetelecom.com), discussed his company’s two current trials, one in Paris that is already well underway and another in Slovakia that should begin at the end of this year. In Paris, France Telecom is offering 100-Mbit/sec symmetrical data services, voice, and video with two HDTV streams for around €70 per month. The carrier hopes to have 1,000 customers for the trial by the end of this year. The Slovakian trial will be launched in conjunction with its Orange mobile services subsidiary to offer bundled services. France Telecom is using GPON equipment from Alcatel, as well as a router/gateway from SAGEM.

Meanwhile, Telefónica (www.telefonica.com) has conducted FTTH trials in the Madrid area. According to José Luis Novoa Lozano, director of access transport at Telefónica de España, the carrier conducted trials over a wide range of residences with varying levels of in-building wiring. The carrier used EPON equipment because it was the most mature technology available at the time; Novoa Lozano allowed that the carrier would have used GPON equipment had it been available. In addition to testing systems technology, the carrier also trialed blown fiber technology as an in-building cabling approach, which Novoa Lozano reported worked well. The trials showed the FTTH “is feasible,” he said; however, Telefónica currently has no further FTTH deployment plans and is using FTTX.