Beyond bandwidth: QoS and service differentiation in GPON 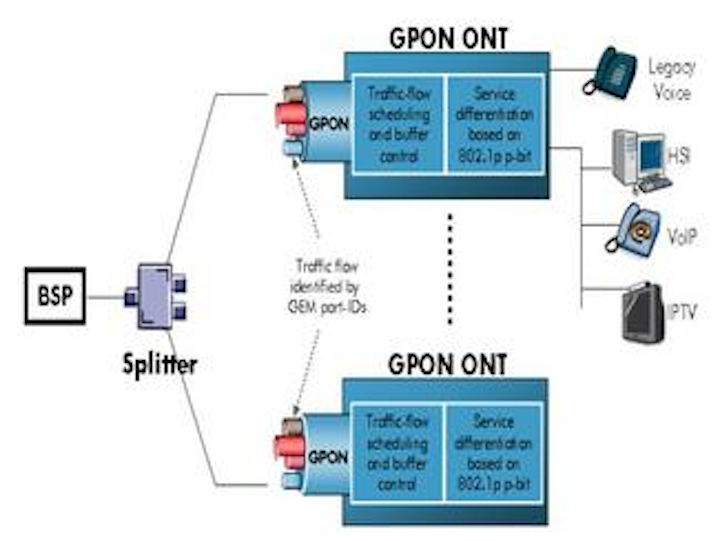 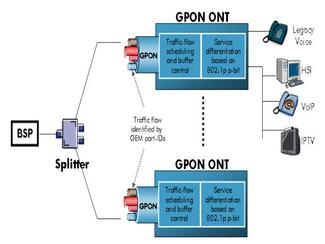 Figure 1: The GPON ONT provides service differentiation based on 802.1-p p-bit checking, a separate queue for voice traffic, up to eight queues per Ethernet interface, and dynamic bandwidth allocation capabilities for guaranteed bandwidth and the fair allocation of unused bandwidth.

The Full Service Access Networks (FSAN) Group began work on a Gigabit-capable passive optical network (GPON) standard in 2002. GPON offers significantly higher bandwidth and more efficient transport of Internet Protocol (IP)-based services compared with other PON technologies. By the middle of 2004, FSAN had developed a nearly complete specification set for the delivery of voice, data, and video services over GPON, but efforts continued into 2005 to further refine the specifications to make them more suitable for cost-effective, robust implementation--and to include quality-of-service (QoS) features.

By early 2005, agreements were reached within FSAN to implement a single set of line rates and long reach optics and the QoS enhancements necessary for IP-based triple-play service delivery. These agreements reflect the consensus of FSAN members and their desire to optimize factors such as end-to-end QoS, bandwidth, reach, cost of optics, and the impact of volume on equipment cost.

FSAN specifies GPON line rates at 2.488 Gbits/secs downstream and 1.244 Gbits/sec upstream with up to 64 splits. GPON offers twice the line rate in the downstream direction compared with Ethernet PON (EPON) and four times that of broadband PON (BPON). But more than line rate, GPON's key advantage is its bandwidth efficiency for both upstream and downstream Ethernet traffic, particularly when compared with EPON. Bandwidth efficiency depends on the amount of overhead needed to carry the revenue-generating user bits. In the upstream direction, efficiency is impacted by the number of users in a given PON and the frequency with which they have to be serviced. While the overhead required for different types of PONs is functionally similar, the amount of overhead for EPON is much larger, which results in inefficiencies.

In the downstream direction, EPON efficiency is 73%, with 875 Mbits/sec of bandwidth for Ethernet packet transport. GPON efficiency is 94% or 2,250 Mbits/sec. This efficiency--combined with higher line rate--gives GPON a significant advantage, especially for service providers looking to deliver high-bandwidth services like IPTV.

Higher bandwidth and greater efficiency in Ethernet transport are not sufficient to ensure the delivery of high-quality voice, data, and video across a GPON network. Ethernet must be enhanced to allow service differentiation, thereby guaranteeing the requisite QoS for each service. For Ethernet-based services, service differentiation is achieved by classifying traffic flows based on service profile, using Ethernet Priority class (IEEE 802.1p bits) or IP DiffServ Code Point (DSCP), ingress policing, queuing and scheduling for traffic prioritization.

The GPON optical network terminal (ONT) plays a key role in ensuring QoS for all traffic because it is the ingress/egress point for all network traffic (See Figure 1). The ONT can have different types of service ports, including one or more analog voice ports and one or more Ethernet ports. It can also perform service classification based on the physical port and map it to 802.1p p-bits. Traffic flows from voice ports, for example, can be classified as highest priority.

As part of this service differentiation, the ONT associates different traffic flows with a specific GPON Encapsulation Method (GEM) Port ID. As shown in Figure 1, these are virtual port identifiers that have significance for a given GPON. Each physical port in a given ONT can have a maximum of eight GEM-ports. 802.1p allows a maximum of eight classes of service (CoS) based on p-bit marking. The GEM-Port IDs and the p-bit marking together define a specific service. Traffic from each physical port can be queued into up to eight separate queues after traffic flow classification. Traffic scheduling is done to serve these queues based on their priority levels.

The Broadband services platform (BSP) includes GPON optical line terminals (OLTs), which connect many ONTs (See Figure 2). All the traffic flows from the ONTs identified by their GEM-Port IDs converge at the BSP. The OLT interface terminates the GPON frame and recovers the Ethernet packets, which are queued into eight or fewer queues based on 802.1p-bit marking. The Ethernet fabric in the BSP connects many OLT interfaces together and aggregates the traffic for upstream transport. Traffic from these queues is scheduled using static priority and/or weighted round robin (WRR) schedulers to ensure proper service prioritization.

To ensure minimum latency, the BSP Ethernet switch has virtually non-blocking architecture and performs switching of Ethernet packets either based on a virtual LAN (VLAN) cross-connect scheme or a self-learning "intelligent Ethernet bridge" function. In either case, the BSP ensures subscriber and service security by inspecting and controlling traffic flow to and from each subscriber. For example, all direct user-to-user traffic is blocked, and broadcast traffic of all types is avoided.

The BSP aggregates subscriber traffic using VLANs, which are terminated at the broadband service aggregator (BSA). VLANs can be used for each individual subscriber, or all subscribers can share a VLAN for a given service. The BSA forwards the VLAN traffic using a virtual private LAN service (VPLS) network to the broadband service router. VPLS is a highly scalable, resilient technology with 50-msec recovery time in case of failure. The BSA maintains a VPLS instance for each service and provides traffic prioritization based on 802.1p-bit and/or DSCP marking. The BSR forms the edge of the IP/MPLS routed network and connects the BSA/BSPs to the IP-based service headends.

Not long ago, any speed over 1 Mbit/sec was considered fast, but many service providers today are offering 10 Mbits/sec and, in some countries, even 100 Mbits/sec for an ever-increasing array of high-bandwidth services that require the use of IP over Ethernet technology. These new services are prompting service providers to re-engineer not only their networks but their entire business models. The combination of a robust QoS scheme with higher bandwidth and more efficient Ethernet transport makes GPON ideal for delivering these services.

Sayeed Rashid is senior marketing manager in Alcatel's Access Networks Division. He may be reached via the company's Web site at www.alcatel.com. 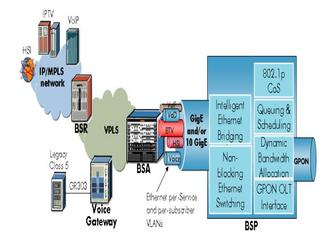