For companies with a copper cable-based architecture approaching the traffic-carrying limits for robust communications and risk to intrusion, it is time to consider a migratory approach to a fiber-optic infrastructure. Advances in passive optical network (PON) and active Ethernet (AE) technologies – both traditional telecom network technologies – offer new, cost-effective Ethernet options that allow enterprises to transition to fiber-optic cabling. 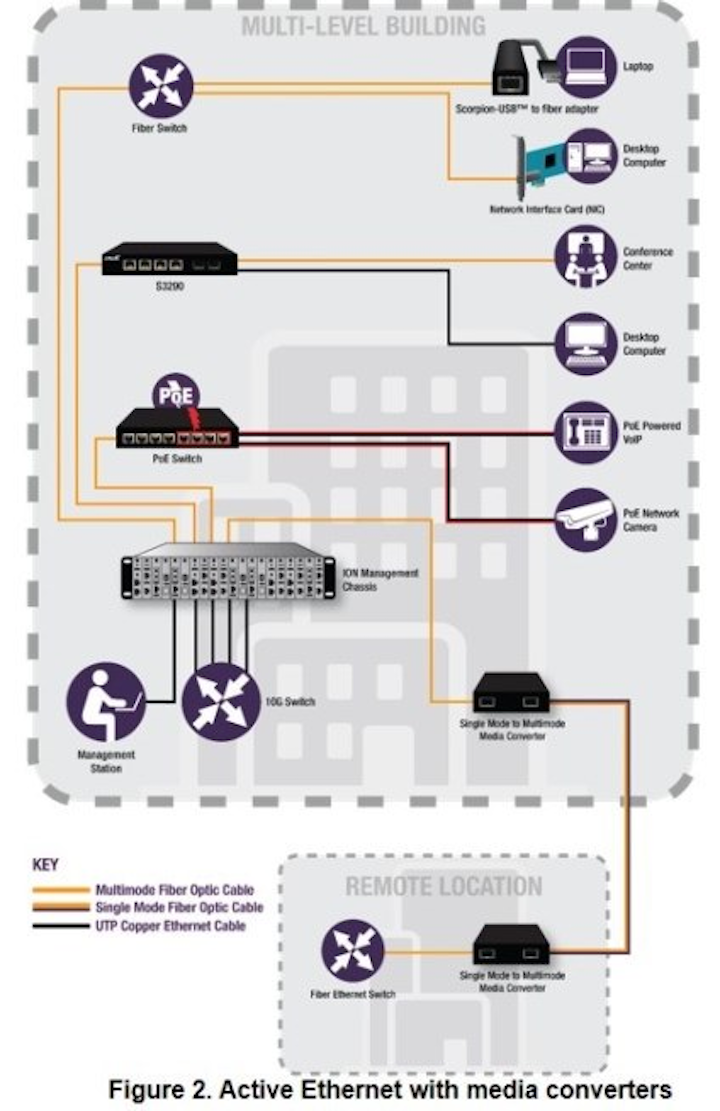 Copper-based CATx cable for years has been the standard for enterprise network connectivity. But for many enterprises, some parts of their copper networks may have finally met their bandwidth match. As services such as video streaming and wireless communications become ubiquitous, and concern over network security grows, traditional copper cabling (Category 5/6/7), in many cases, is becoming the weak link in enterprise networking.

For companies with a copper cable-based architecture approaching the traffic-carrying limits for robust communications and risk to intrusion, it is time to consider a migratory approach to a fiber-optic infrastructure. Advances in passive optical network (PON) and active Ethernet (AE) technologies – both traditional telecom network technologies – offer new, cost-effective Ethernet options that allow enterprises to transition to fiber-optic cabling.

Why transition to fiber-optic enterprise networks?

Fiber-optic networks address both the bandwidth and security concerns inherent in copper-based networks. Fiber infrastructure offers unlimited bandwidth-carrying capability and superior immunity to radiated emissions. Taking the lead from telecom networks' evolution to fiber-to-the-home networks, which have been built using either PON or AE technology, enterprise network managers can take advantage of these technologies for their networks as well.

Enterprises can select PON or AE for their transition because they both share the benefits of fiber-optic networking – greater reach and higher levels of physical layer security than copper infrastructure. It is typical for copper wiring to have a maximum reach of 100 m. In many cases, this distance is not long enough, which requires an increased number of active intermediary points in a network. The result is increased cost, design complexity, and additional points of potential failures. Copper cabling is also subject to radiated emissions that expose the network to snooping via an antenna, thus increasing the potential of unwanted individuals accessing sensitive corporate data.

While fiber distance is dictated by the grade of fiber and lasers used, the distance achieved without signal degradation is orders of magnitude greater than copper. Fiber, being a dielectric, does not radiate and is impervious to security breaches due to radiated emissions.

Thus the main benefits of fiber are distance and security, as well as scalability to meet ever-growing bandwidth demands. Copper CAT 5 currently is limited to 1 Gbps with CAT 6/7 required to support 10 Gbps. Given demands from big data, analytics, and streaming video, 1-Gbps server and backbone connections are quickly becoming a bottleneck.

The performance of a fiber infrastructure derives from its optical transceivers and active devices. Support of 10 Gbps is becoming more common and more cost-effective (with even greater speeds now available for AE networks), which makes a fiber physical infrastructure the ideal method to support growing bandwidth needs now and scale even further in the future.

Fiber-optic communications therefore solves the challenges of distance, security, and bandwidth and simplifies network design. Now the challenge is to find an economical way to evolve your enterprise network to take advantage.

Passive optical LAN (POL) is a fiber distribution technology that evolved from the PON technologies operators use to deliver fiber-based services to the home. This technology derived from the constraints of limited fiber availability and the lack of (and the desire to avoid) distributed power in these "last mile" customer access networks. Thus, the strength of PON architectures is the ability to share bandwidth over a common fiber and deliver data to the end points using passive (non-powered) splitters. 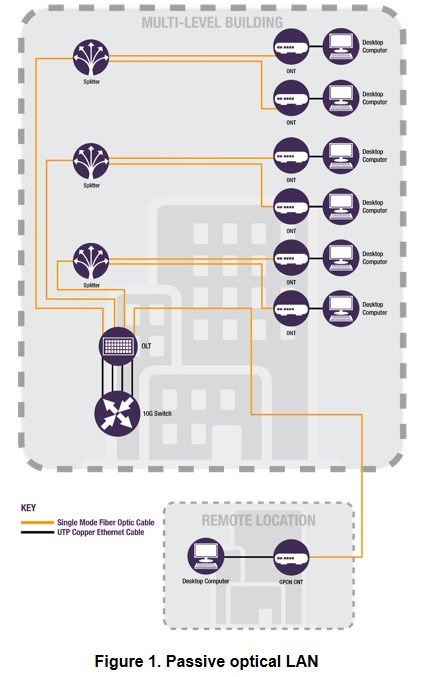 To facilitate this sharing, two main elements are added into the fiber distribution network: the optical line terminal (OLT) and the optical network unit (ONU). The OLT conditions inputs such as Ethernet and TDM services for transport over the PON, while the ONU translates from PON back to the native services for presentation to common user equipment (see Figure 1).

POL's use of shared fiber and passive splitting reduces the number of fibers required as well as eliminates the need for power on the intermediary fiber networking equipment. Such fiber efficiency and passive splitting are of utmost economic importance in carrier access networks, particularly where customer density is comparatively low and power sources are not easily determined. Enterprise networks, however, often have a greater density of high-bandwidth consumers and power throughout the network, which is relatively easily accessible given the needs of the other networking elements.

As we've mentioned, POL requires the introduction of specialty conditioning equipment in the form of the OLT and premises equipment in the ONT, as well as shared infrastructure. POL also requires the replacement of familiar Ethernet networking equipment. In an existing network, this would require redistribution of network equipment and disruption to services, which make the transition problematic.

POL, therefore, may be better suited to a new "greenfield" network build. However, it still would require additional training and the introduction of perhaps unfamiliar networking environment. The POL systems would still operate on a shared services model as well. While there is simplicity in passive splitting, it could be difficult to ensure service levels to a given client, depending upon how many clients share a given link.

Thus, while POL does introduce fiber into the enterprise and brings the advantages of passive networking, the enterprise manager needs to consider the potential disadvantages as well. These hurdles include the training required for the introduction of a new network technology and the disruption to existing services. In addition, the shared nature of the passive split leaves the IT manager with limited tools to manage and ensure service levels to critical services.

There are also performance restrictions defined by the technology standards POL systems vendors have most commonly followed that have to be considered in an enterprise network, such as: 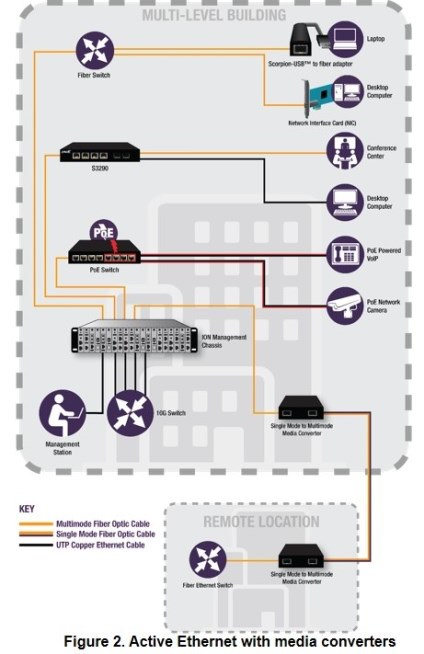 AE is simply an extension of the Ethernet networking technologies that support the transmission of 10/100/1000 Mbps over Category 5 copper twisted-pair cables and 10 Gbps over Category 6 copper cables. The difference is the introduction of media conversion to enable the migration of the existing copper Ethernet transmission to a fiber-optic network. New innovations around Carrier Ethernet enable ease of management, visibility, and control of the network, with the media converter now able to act as an active demarcation point that enables greater network visibility and service assurance.

AE makes it possible to balance the mix of fiber and copper and maintain use of copper where it is working well or where it is provides additional benefits (such as power distribution via PoE). While AE does require dedicated fiber links to each end point, CWDM provides a cost-effective method of transmitting up to 16 dedicated channels over a single fiber pair, which enables fiber sharing in network backbones.

AE offers an evolutionary approach to network migration with greater levels of service assurance than that offered from the shared services of POL. 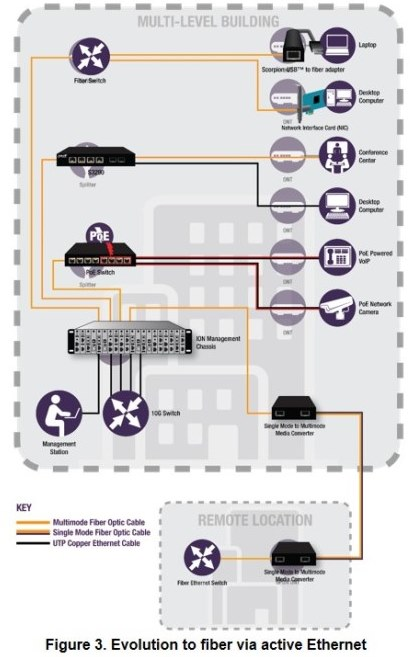 The migration to fiber networking does not need to be an all or nothing proposition. As POL introduces new networking elements, this approach requires a bookended system reliant upon the combination of OLT and ONT network elements. In contrast, AE works seamlessly with existing Ethernet networking architectures, making an evolution to fiber or a hybrid network architecture familiar (see Figure 3).

For example, an AE architecture can start the evolution by creating a spine of fiber optics in the risers, which will provide and ensure a robust pipeline to the furthest reaches of enterprise. Vertical offshoots from this spine can remain copper where the drops are within proximity of the user and the bandwidth requirements are limited. This evolutionary approach targets where the need is the greatest while minimizing network disruptions and cost.

AE architectures can also make use of Carrier Ethernet technologies that not only provide the copper/fiber interconnection but also serve as a service point in the network from which to generate important performance monitoring statistics. These service points can also be used to manage service levels between multiple networks to ensure service levels for critical applications.

Make the move to fiber

Whether POL or AE is used, enterprises still garner the advantages of fiber-optic networking to address copper wiring's limits of distance, bandwidth and security.

AE brings the advantage of familiarity with Ethernet networking, an evolutionary approach to network design, the highest level of equipment re-use, and an active network management tool-kit.

Using AE, network managers can migrate critical links to fiber without affecting service on the entire network, work in an environment for which they are trained and with which they are familiar, and have options to bring greater control, visibility, and service assurance to their network functions.