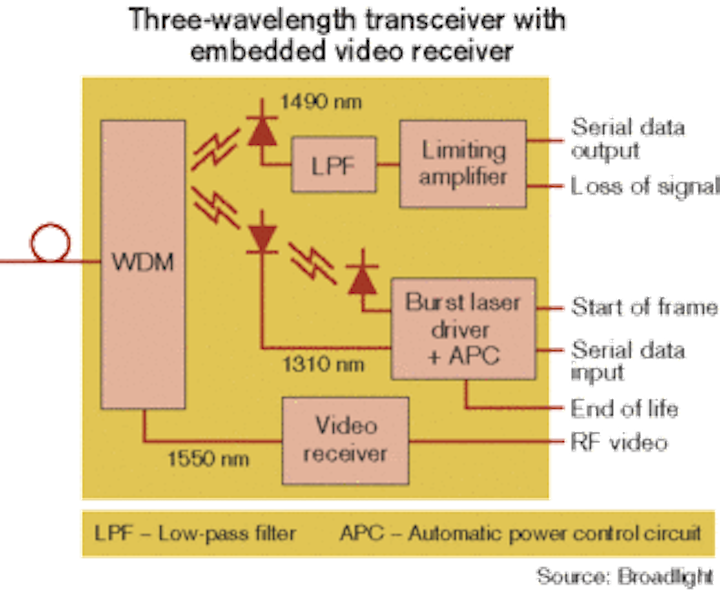 Because of their unique point-to-multipoint topology, passive optical networks (PONs) place additional burdens on transceivers. In the typical PON, one optical line terminal (OLT) in the central office (CO) serves up to 32 optical network terminals (ONTs), requiring complicated optics and burst-mode electronics. But above all, the devices must meet price points at or below $100. As one industry insider claims, "this is a challenging price point for anyone." 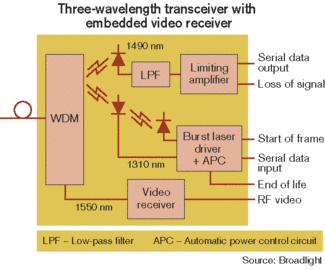 The main components of a three-wavelength passive-optical-network transceiver include the bulk optics-based WDM module, a limiting amplifier, the burst-mode laser driver, and video receiver.

The bulk of the market to date is centered in Japan, where two-wavelength PON systems are the norm. In the United States, the RBOC trio of Verizon, BellSouth, and SBC recently settled on the Full Services Access Network (FSAN) ITU G983.3 standard, which defines the optical characteristics of a PON with three wavelengths: two downstream at 1490 and 1550 nm (the latter to support RF broadcast video) and one upstream at 1310 nm. The FSAN standard defines three classes of transceivers-A, B, and C-based on the number of splits and the maximum reach. The RBOC's joint request for proposal specifies Class B transceivers, which feature 32 splits and a 20-km reach.

At the heart of the ONT transceiver is a WDM module called the triplexer that separates each of the wavelengths. A three-wavelength transceiver is sometimes erroneously referred to as a triplexer; the term "triplexer" actually refers to the optical block within the transceiver that does the wavelength splitting and combining and handles the optical-to-electrical conversion. Today, the triplexer is most often achieved via a bulk optics technology. "Bulk optics comes from the notion of taking a TO-can device, which is done in high volume all over the world today, and combining it with a mechanical arrangement that includes frequency-sensitive mirrors," explains Lee Johnson, vice president of marketing at Ortel (Alhambra, CA), a division of Emcore (Somerset, NJ).

From the triplexer, the continuous downstream data carried on the 1490-nm wavelength is filtered and amplified by a limiting amplifier. A burst-mode laser-driver IC controls the burst upstream data on the 1310-nm wavelength, while the video broadcast streaming on the 1550-nm wavelength is controlled by integrated analog video receive circuitry.

The burst-mode electronics are unique to the PON transceiver. The burst-mode capability enables a single transceiver in the CO to communicate with the transceivers in the ONTs through the use of "timeslots." Take a downstream, 622-Mbit signal, for example, that is broadcast from the CO to 32 separate homes or businesses. The signal is time-division multiplexed, and each receiver is synchronized to look at only the timeslot within the broadcast stream that belongs to it. Home #1 looks at the first timeslot, home #2 the second slot, and so on.

In the return direction, each of the 32 homes has a connection back to the receiver in the CO, but that receiver can only receive one signal at a time. Again, home #1 gets the first burst back into the fiber and on to the common receiver in the CO. Home #2 bursts in the second timeslot, home #3 in the third, etc. "So at the receiver in the CO, you now have those 32 timeslots lined up and you can demultiplex them electrically or you can send the stream in digital fashion at a high speed into your IP network," notes Johnson. "You now have a way to communicate over an optical architecture that's shared."

This burstiness "directly impacts the overall utilization of the PON," adds Didi Ivancovsky, vice president of products and founder of Broadlight (Mountain View, CA). "If it takes you a lot of time to turn your laser on and off, then you are losing this time; you are not doing any transfer of information." The BPON standard is the most difficult to implement, since the laser must be turned off and on in just a few nanoseconds.

By all accounts, the biggest driver in the PON transceiver market is cost. "The price points need to be low enough to make [PON] viable for displacing DSL or some other kind of service alternative," reports Ron Lindsey, director of engineering at Excelight Communications (Durham, NC). "There is huge pressure, and it's going to have a significant impact on the technologies that are selected."

According to one industry insider, the target price for the OLT transceiver is somewhere in the neighborhood of $100. The need for a high-power 1490-nm laser that operates over an extended temperature range may prevent OLT prices from dropping any lower. Pricing is even more stringent for the ONT; today, such transceivers are selling in the $50-$60 range, but as volumes ramp, the target price could drop to around $30.

As a result, according to Emcore's Johnson, the next-generation triplexer is likely to entail some form of integration using planar-lightwave-circuit (PLC) technology rather than the bulk optics approach pervasive today. The PLC-based triplexer will perform the same functions as the bulk optics device but at a much lower cost, because PLCs can be manufactured automatically. "It is quite clear that in the future, it will be waveguide," agrees Ivancovsky, "but most industry players believe that the next three to five years are still bulk optics."

Packaging, most likely involving hybrid rather than monolithic integration, will become a significant differentiator, Johnson says. "The real secret sauce here is how do you scale the PLC in optics and electronics together in a package that allows you to build very-high-volume, very-low-cost, very-high-performance PON transceivers?" he offers.

"The adding of the passive splitter, combiner, PLC with waveguides and filters built-in or added on to it is the real focus of attention of a lot of companies," adds Johnson. "The first guy to get there and get the design win on the North American triplexer BPON transceiver optical integrated PLC is going to have a headstart on a lot of people."

There is also increased interest in entering the burst-mode IC market, reports Ivancovsky. He believes we will likely see the integration of the limiting amplifier with the burst-mode laser driver on a single IC, which again will lower the overall cost of the transceiver.

Moreover, he says, "one of the things that we will probably see in the next few years when the big carriers gain more experience in the market is more features integrated within the transceiver that relate to OEM functions-online testing, online diagnostics. This will be the competitive edge of new transceivers in the next two years."

If there is one overriding trend in the PON transceiver space-besides lowering cost-it may be the lingering uncertainty about which flavor of PON will ultimately win favor in today's biggest markets: Japan and the United States. "Going forward, we're thinking the [Japanese] market is actually going to switch from BPON [broadband] to EPON [Ethernet] in 2006, 2007," explains Daryl Inniss, program director of optical components at market researcher RHK (South San Francisco). "This will be a two-wavelength EPON. And we think that GPON [gigabit] will gain popularity in North America [in the same time frame]. There will be a transition where you'll need or you'll want higher data rates, and GPON will come into play. North America will still be a three-wavelength GPON."

So why haven't the RBOCs deployed GPON from the outset? Again, it all comes back to pricing. "The integrated circuits-specifically the burst-mode that is needed for this architecture-are not easy to [manufacture]," muses Inniss. There aren't many suppliers that can support burst-mode performance with ICs at GPON speed today, he says, "and that's where the problem is. You don't have a readily available source of components across the industry, and that affects pricing. [Pricing] will be high to start, and that makes it difficult to deploy this architecture at the outset."