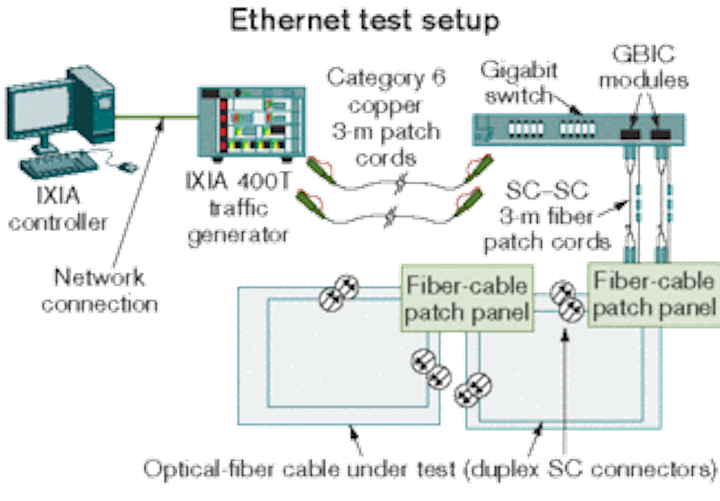 Fiber-optic-cable manufacturers characterize their products through attenuation testing and bandwidth data. While these parameters can be the basis for good performance, they do not represent the entire picture. Since these cables are used mostly in LANs, it makes sense to additionally look at their performance within this environment. To this end, the Nexans Data Communications Competence Center has been evaluating multimode fiber (MMF) from a systems point of view.

Devices from various transceiver manufacturers were obtained and used to ascertain if there were differences in optical reach. (Nondisclosure agreements prevent naming the manufacturers.) The findings presented here are for Gigabit and 10-Gigabit Ethernet (10-GbE). When completed, assessments will also include frame error rate (FER) and length evaluation of MMF using transceiver combinations for 1-, 2-, 4- and 10-Gigabit Fibre Channel.

To accurately simulate an enterprise network, commercially available switches were used in the trials. 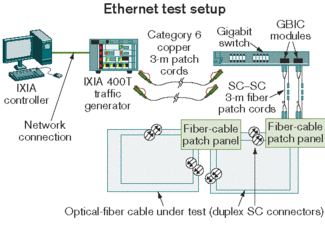 Figure 1 shows a schematic of one representation of the test setup. Several variations of this network configuration were used and included different arrangements of the following equipment: Spirent SmartBits or IXIA chassis with 1-Gbit/sec copper or optical cards, IXIA chassis with 10-Gbit/sec XENPAK load modules, and switches from Cisco Systems,Extreme Networks, SMC, and Asante.

The IXIA or Spirent equipment generated the Ethernet frames and measured the number of frames subsequently received. From this information, the FER was calculated. Each test was run long enough (about eight days running 1-Gbit/sec data and one day for 10-Gbit/sec streams) to transmit at least 1012 packets to produce an error rate of <10-13.

The test matrix included both long- and short-wavelength GBIC and small-form-factor-pluggable (SFP) transceivers for 1-Gbit/sec applications as well as XENPAK and XFP modules for 10-Gbit/sec operation. Six different transceiver manufacturers' "off-the-shelf" devices were used in the experiment. In addition, all grades of Berk-Tek GIGAlite fiber-optic cable were incorporated within the plan. The Table details the cable types and specifications.

The data reveals that depending on the cable used, there could be a drastic disparity between transceivers from different vendors. While all products met or exceeded the industry-specified optical reach, some demonstrated better distance performance than others. For example, when using standard 700 MHz·km (EB) cables vastly improved the optical reach of all the transceivers tested (see Figures 2 and 3).

The test results demonstrate that some transceiver and transponder suppliers' products far exceeded the provisions laid out by the standards organizations. They also show that even with minimally compliant devices, today's fiber-optic cable can outperform maximum specified distances. Extended lengths of MMF present an opportunity to reduce the overall cost of ownership of both GbE and 10-GbE LAN cabling systems. How? Short-wavelength (SX) transceivers can be used for longer-distance links. These devices are nearly one-third the cost of long-wavelength ones. This large cost differential is why the LAN has primarily consisted of (about 85%) MMF and SX devices. Based onNexans's study, multimode LANcabling can support distances of 600 m running at 10 Gbits/sec. Up until now, the maximum theoretical length has been 300 m. 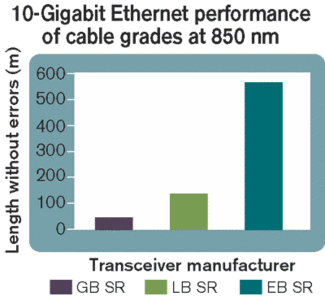 Why does there seem to be such a discrepancy between theoretical and actual data? Several factors contribute to this disparity.

The IEEE-recommended distances were calculated using a worst-case scenario. The actual bandwidth of the fiber may be better than the specified minimum. In the case of the cable that was tested, the bandwidth was well above the minimum allowed values. Also, the bandwidth of optical fiber can vary depending on the light sources used with the fiber. In general, MMF was originally designed for and used with LED transmitters, so overfilled (OFL) bandwidth was specified. OFL bandwidth corresponds to the way an LED excites the modes in MMF but is not accurate when using modern light sources such as VCSELs. There are two major developments that have occurred over the past 10 years that contribute to allowing longer link lengths:

Like the fiber, optical transceivers rarely perform at their worst-case conditions. Many manufacturers strive to provide devices that have some margin in the transmitter and receiver. That is substantiated by the test results, since all suppliers exceed the minimum length requirements. However, the Nexans tests show that some companies are much better at accomplishing this goal than others (see Figure 2). 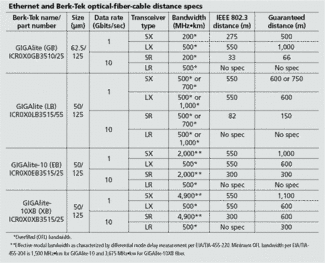 Today, the majority of Ethernet connections are 10/100 Mbits/sec, but that is quickly changing. Most computers are now being shipped with 10/100/1,000-Mbit/sec network capability, so even though there are currently few applications that require it, GbE to the desktop is technologically becoming a commercial reality. Once these links are actually running at 1 Gbit/sec, it is only a matter of time before the backbone of the network becomes a bottleneck and must be upgraded to 10 Gbits/sec. By carefully choosing fiber-optic cables and transceivers that can give more margins in either error rate or distance, end users can reduce total installation and operating costs as well as maximize the bandwidth potential and thus the distance objectives of a cabling system.

Lisa A. Huff is a senior project engineer with the advanced design and applications team at Nexans's Data Communications Competence Center, located at Berk-Tek headquarters in New Holland, PA. The center focuses on advanced product design, applications, and materials development for data-networking cabling. The advanced design and applications team uses proprietary testing and modeling tools to translate emerging system requirements into new or improved products. Huff can be reached at lisa.huff@nexans.com. 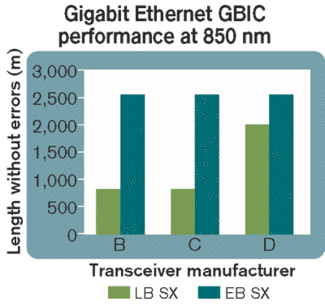