Well-connected entrepreneur and philanthropist Greg Wylar was traveling through the central African nation of Rwanda when he came to a not-so-surprising conclusion.

“I saw lots of people talking about putting in what we would consider in the U.S. to be backwards infrastructure: small, little satellite dishes scattered around, and very expensive. GSM version one-the 1993 version of GSM. From our perspective, antiquated technologies,” he says. “And I saw the prices that they were paying for this, and I said to the president at one point, ‘Hey, for this kind of money, you could put in a real infrastructure.’ ” 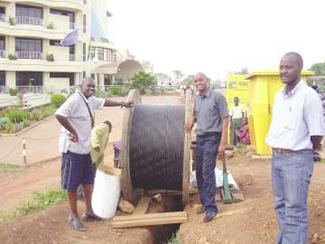 Many of the tasks Westerners would expect to perform with machines have been done by hand in Rwanda.

Rwandan President Paul Kagame liked the idea and urged Wylar to follow through on it. The result is Terracom, a privately funded network service provider that is considering the unique approach of using PON technology to link Rwanda’s five major cities via a fiber-optic backbone.

The prior lack of modern telecommunications infrastructure has hamstrung economic development in the country. “When it costs 92¢ [a minute] to make a phone call internationally, you don’t make many phone calls,” Wylar explains. “When Internet [access] is thousands of dollars a month, you can’t get on the Internet.”

Terracom plans to change that. Founded at the beginning of this year, the company aims initially to provide broadband communications to schools, health centers, and government offices in the capital city of Kigali, then spread to the country’s four other major cities: Gitarama, Butare, Gisenyi, and Ruhengeri.

While Wylar is American, Terracom is a distinctly Rwandan enterprise. “He doesn’t want this to be an American- or European-led company, with the locals running the menial jobs,” explains Mike Serrano, director of product marketing at Alloptic (Livermore, CA), which provides the PON equipment. “He wants to create a company where they’re owning it and operating it.”

“There’s about 30 Rwandese there on the ground right now. They run it, they manage it, they do everything,” says Wylar, who serves as Terracom’s managing director, without pay. “What I do is help them understand the technologies, introduce them to the right people.”

Wylar was convinced early in the planning process that the right people included providers of optical communications technology. However, the approach that would be typical for Western projects didn’t appeal to him. “It seemed that using standard fiber with a bunch of add/drop modules and putting in a ring created tremendous overhead problems,” he says. Powering network equipment in a country where outages are common presented a salient obstacle, for example.

The fact that PON architectures minimize the number of elements that require powering thus appealed to Wylar. “With a passive-optical-network solution, we have no power issues,” he explains. “If one customer or two customers or 10 or 50 drop, the other 40 or 49 are still on.”

The fact that Alloptic’s equipment supports Gigabit Ethernet also attracted Wylar. “Especially in Third World areas, where you’re going to need a fiber backbone for a WiMAX implementation or wireless or whatever, you can use it to backhaul,” he says of the technology. “We run 100 Mbits over the PON, which is enough to backhaul the information we’re dealing with.”

The combination of economic realities and Wylar’s “Rwandese first” mandate has made network deployment somewhat unusual from a Western perspective. “What was interesting is that when you sell domestically or even in Europe, the electronics are a small portion of the overall project [cost]. Most of the project is digging trenches, putting in fiber, and doing the splices,” says Serrano. “And the economics down in Rwanda are absolutely upside down. The cost of putting in trenches-it was dollars per day that he was paying people. When he started out, he was hand trenching.”

In one interesting section of the deployment, Wylar worked with OFS to supply to the field a 7-km cable in one piece. After digging the trench and installing conduit where necessary, 700 people unrolled the spool and laid it in place hand-over-hand as they straddled the trench. “We’re able to do that because the labor is less expensive than in the U.S., and the people are very hungry to learn and excited about the technology,” Wylar explains.

Which is not to say that Terracom is not willing to embrace modern methods of deployment. “[Wylar] sent us some pictures of about 20 guys standing over a trench,” Serrano relates. “And it was funny because his first email was with these pictures, ‘We’re starting to dig trenches. I’ve got 200 guys digging.’ Then, a couple of days later he came back and said, ‘I need to get to a thousand guys digging, because we’re not moving fast enough.’ Then a couple of days later he sends us an email: ‘Do you know where I can buy a trencher?’ ”

Wylar insisted that Terracom employees become fully invested in each part of the deployment. For example, Alloptic usually makes systems engineers available to help its customers bring up their new equipment. “Greg was pretty adamant that they had to be self-sufficient,” says Serrano of Terracom’s installers. “They would take the manuals and potentially send someone here to learn how to [bring up the equipment]. In the end what he did, which was really quite unique, is that he found some college students at Cal Poly San Luis Obispo and hired them as summer interns. They actually came here to Alloptic; they spent about three days learning the system inside and out. And then they were over there all summer, and their job was to bring up the system and train the locals.”

Alloptic does monitor the state of the Terracom network remotely. “It allows us to help identify any potential problems before they become real network outages if they’re doing something wrong,” Serrano says. “So we continue to monitor it, but that system has been up and running, and it’s been going fine.”

Most of the emphasis since deployment began this summer has focused on Kigali. At press time, about 30 schools and 150 other facilities were online. Wylar hopes to have all five cities linked by the middle of next year. He is confident that he can use the PON technology to power the backbone among the cities, which range from about 35 to 75 km apart. Serrano says the latter distance is on the edge of Alloptic’s system capabilities.

So far, Terracom has achieved several of its goals. “People have very strong Internet connectivity, and now phone calls have moved from 92¢ a minute to call the U.S. down to 23¢ a minute-and dropping,” Wylar states.

Alloptic is equally pleased with the results. “We looked at the opportunity, looked at the country, looked at the guy behind it, and it’s like, ‘You know, well sure we’d like to make a big profit. But there are a lot more social implications here.’ So as a corporation, we said if we can do, let’s do it,” Serrano concludes. “At the end of the day, it’s kind of nice to have one deal where you know you can look at it and say, ‘Hey, you know what? We’re changing the world, whatever corner it is.’ ”