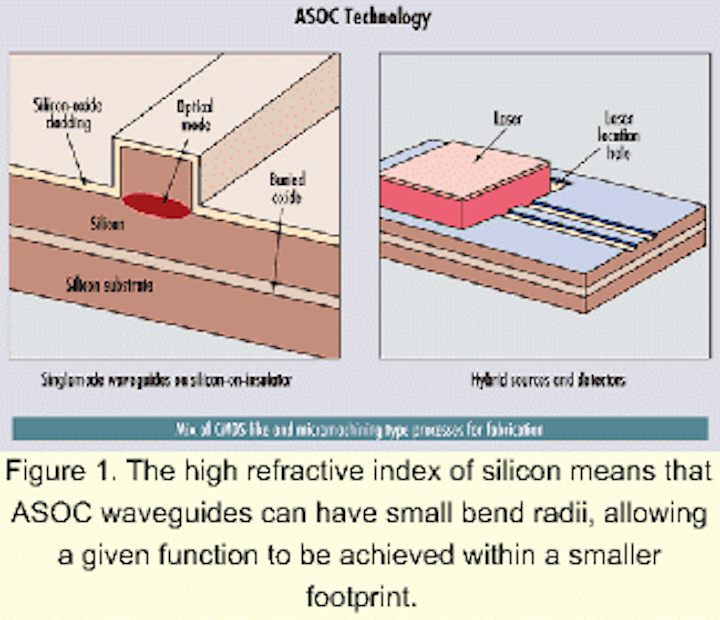 Dense wavelength-division multiplexing (DWDM) is now firmly established as the technology of choice for high-capacity, long-haul optical networking. Moreover, its influence is spreading throughout the network, particularly into metropolitan and access environments-albeit at lower channel counts than systems used in the trunk network.

The technology, which was originally devised to squeeze extra bandwidth out of existing fiber, is now common in new network builds. Network operators have leapt at the opportunity to address what seems to be limitless demand for communications bandwidth from individual and corporate users with the rise of the Internet and the increase in data traffic in general. 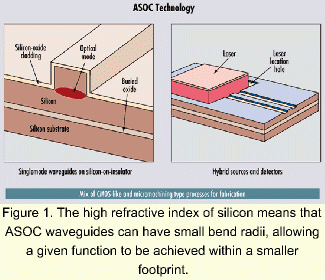 Figure 1. The high refractive index of silicon means that ASOC waveguides can have small bend radii, allowing a given function to be achieved within a smaller footprint.

Network operators' central offices and other sites are crammed with 19-inch racks full of equipment. For an 80-channel DWDM system, a single function such as multiplexing can take up a considerable proportion of the available space because of the multiple repetition of a simple optical function.

Part of the problem is that traditional optical and optoelectronic components do not lend themselves readily to miniaturization and integration. Using traditional approaches, increasing bandwidth means replicating the same optical functions with the same components, many times over. Not only does this increase space requirements, it also lengthens component lead times and increases manufacturing complexity-reducing the capability of the system vendor to meet end-customer delivery requirements.

The use of discrete components also increases fiber-handling requirements. Light signals must be routed between discrete components using fiber. Thus, the operators' racks are filled not only with components, but also with a mass of fiber-as much as 300 m for 160-channel systems. 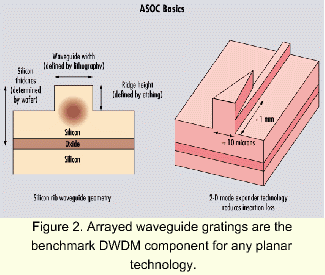 Figure 2. Arrayed waveguide gratings are the benchmark DWDM component for any planar technology.

Many of these problems could be solved by successfully integrating multiple optical functions onto a single component. Component makers have been searching for years for an integration platform that combines high performance and extensive functionality with excellent manufacturability.

A technology now gaining acceptance in the market is a proprietary all-silicon-based integration technology called ASOC. This technology takes full advantage of the processing methods and production equipment that have been developed over the last 30 years of the microelectronics industry, without the disadvantages of adding layers of different materials, such as glass, on top of the pure silicon. This makes ASOC an attractive manufacturing technology: It uses mature, robust, well-understood technologies that are tailored for volume production.

The range of photonic functions that can be realized in ASOC is extensive and includes multiplexing/demultiplexing; variable optical attenuation; amplitude and phase modulation; taps and splitters; mode-size transformation; and hybridization. Figure 1 shows the ASOC waveguide structure. In addition, the high refractive index of silicon means that ASOC waveguides can have small bend radii, allowing a given function to be achieved within a smaller footprint, supporting miniaturization. 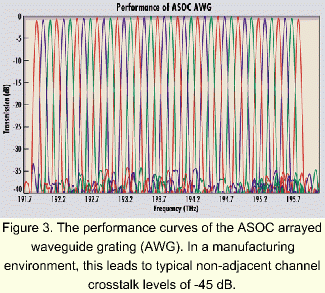 Figure 3. The performance curves of the ASOC arrayed waveguide grating (AWG). In a manufacturing environment, this leads to typical non-adjacent channel crosstalk levels of -45 dB.

The true test of any integration technology is whether it can achieve high optical performance. The marketplace simply has no room for under-performing technologies, and this provides a stiff test for any new contender to be "the integration platform of choice."

Arrayed waveguide gratings (AWGs) are now the benchmark DWDM component for any planar technology (see Figure 2). AWG technology represents the first fruits of integration because it provides the highest-density solution currently available for multiplexing/ demultiplexing, and is widely regarded as the only feasible solution for systems using 40-160 wavelengths.

Although silica-on-silicon technology has supported the early phase of AWG deployment, a consistent problem with AWG performance has been high levels of interchannel crosstalk. While 30- to 35-dB levels of crosstalk seem impressive on a single channel basis, when it adds up over 40 channels, it is an unacceptable level of integrated crosstalk, necessitating the addition of expensive secondary "cleanup" filters. The problem stems from the difficulty in controlling the optical phase in the deposited silica layer to the level required for a high-performance AWG.

This is where the pure-silicon nature of ASOC has its advantage. Not only is the material a single crystal-"every atom in its place"-but it is also the best-characterized engineering material in the world for the subsequent etching and waveguide formation process. In a manufacturing environment, this leads to typical nonadjacent channel crosstalk levels of well below -45 dB. This enables worst-case specifications of -23 dB to be met for 40-channel Gaussian devices, which places ASOC technology firmly at the high end of AWG performance (see Figure 3).

Although a decibel of crosstalk is just as important as a decibel of insertion loss for overall system performance, it is the achievement of low insertion loss that has put ASOC on the map as a highly competitive AWG product. The small-dimension ASOC waveguides-highly desirable for small bend radii and future miniaturization-have now been combined with 2-D mode expanders to achieve efficient coupling to singlemode fiber. ASOC AWGs, including the integrated mode expander, are now on the market showing impressive insertion losses of <8 dB for flattened devices and <6 dB for Gaussian devices. Combined with the inherent advantage in crosstalk, this makes for a powerful competitive challenge for silica from the all-silicon camp.

Again, the low loss and good crosstalk performance of the silicon is key, but in this case, instead of being passed to fibers, the light is directly coupled into a photodetector (see Figure 4). The OCM provides electrical outputs that can be fed back to other parts of the system that need information on the power contained in each channel. For instance, the OCM could be used in conjunction with an electronic variable optical attenuator (EVOA) to achieve the channel-balancing function, which is a critical part of allowing longer system reaches and the use of less complex amplifiers (see Figure 5).

While ASOC modules are now being designed into WDM systems on the basis of passive and hybridized technology, it is the addition of active functionality in the silicon itself, which further differentiates ASOC from alternative approaches. 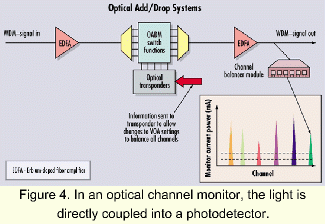 Figure 4. In an optical channel monitor, the light is directly coupled into a photodetector.

VOAs are used in DWDM systems to balance the power in each transmitted channel, relaxing the requirement for "super-flat" optical amplifiers. These devices can, for example, be controlled using signals derived from an OCM.

Historically, VOAs have been just the kind of bulky single-channel devices that present a headache for network operators. Large numbers of VOAs require many cards at the central office at the hub of a Synchronous Optical Network/Synchronous Digital Hierarchy (SONET/SDH) ring. Therefore, manufacturing costs are high, and the cards can occupy large amounts of rack space in a high-channel-count system.

The ASOC EVOA solution, an integrated multichannel VOA, seeks to solve these problems. The basic technology involves charge injection via doped regions in the silicon. The device incorporates four channels in a 20-pin plastic package to produce a solid-state multichannel EVOA with high attenuation, fast response time, and low polarization-dependent loss of typically 0.2 dB or less. Use of the 20-pin package opens the way for a future 8-channel device with the same mechanical footprint.

The device's high attenuation (up to 30 dB) allows it to be used not just for channel balancing, but also for channel blocking, a key function in system setup or optical add/drop multiplexing. This provides switch functionality in a highly integrated and compact form-again reducing system size requirements.

Figure 5. The optical channel monitor could be used in conjunction with an electronic variable optical attenuator (EVOA) to achieve the channel-balancing function, which is a critical part of allowing longer system reaches and the use of less complex amplifiers.

The component's fast response speed in the megahertz range also allows it to be used to superimpose an analog tone on to the digital signal. This allows the designer to modulate extra information-such as system management information-over the existing digital signal, again cutting system size and complexity. Each channel can have a different tone superimposed upon it, allowing information to be extracted without demodulating the DWDM digital signal.

A growing range of products illustrates the potential benefits of an integrated approach to optical device manufacture. Future developments will see further miniaturization and incorporation of both electrical and optical functions within a single package, reducing space requirements and cutting system complexity.

ASOC's high level of functionality-attenuation, blocking, and modulation-also points the way to more highly integrated modules. It is this higher level of functionality that is the added value that customers seek when choosing a next-generation platform. This may mean, for example, fully integrated multiplexer/VOA arrays for complete channel balancing control or complete optical add/drop multiplexing (OADM) solutions with integrated switches and attenuators. Exactly which functions will be integrated together is a question for customers. But one thing is for sure-the integrated approach is the way forward for the foreseeable future.