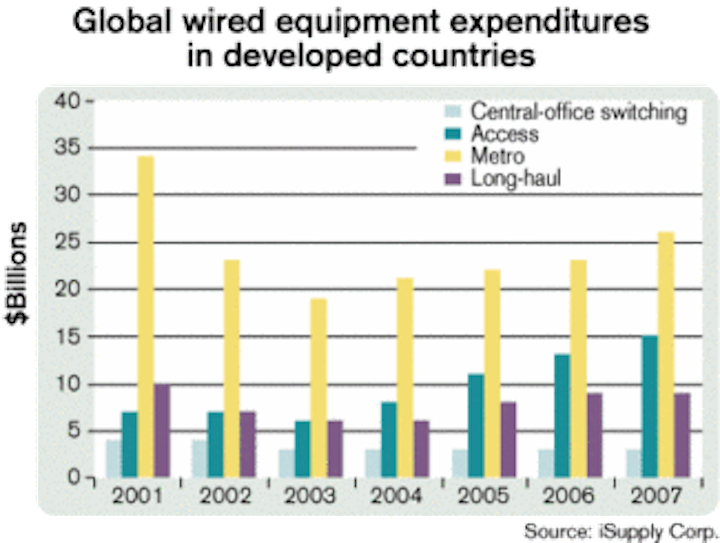 Today's carriers continue to strive for a positive balance sheet, and cutting capital expenditures (capex) remains the quickest way to achieve this objective. From the height of the telecom bubble in 2000 to the end of this year, capex will have fallen 60%, a difference of $62 billion and hundreds of bankruptcies, contends a new report from iSuppli (El Segundo, CA). But the spending decline should hit bottom by year's end, say analysts. Near-term, equipment vendors would do well to tailor product offerings to satisfy carriers' current needs.

According to the report, SONET/SDH will remain king in the metro segment; the move to alternative transport architectures is "virtually dead for now." OEMs should focus on next-generation SONET/SDH equipment and put other technologies on the back-burner, says Steve Rago, iSuppli's principal analyst of networking and optical communications. "The dream is still one of an all-packet network, but the carriers' pocketbooks can only afford more of the same for now," he reports. 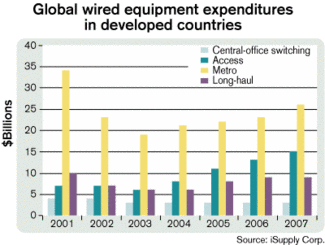 To that end, semiconductor suppliers should expedite the development of next-generation SONET/SDH chipsets so OEMs and carriers can start field-trial programs. Highly integrated chipsets will not be required until mass deployment takes place. Equipment vendors should also target the access and metro edge, which will combine for 54% of capex equipment dollars this year, says the report. Carriers are looking to deploy multiservice platforms that can be remotely and dynamically provisioned. The ability to provide value-added data services is also on carriers' wish lists. "Carriers want to offer services, not bit transport," says Rago.