Metro networks: the next killer app for DWDM? 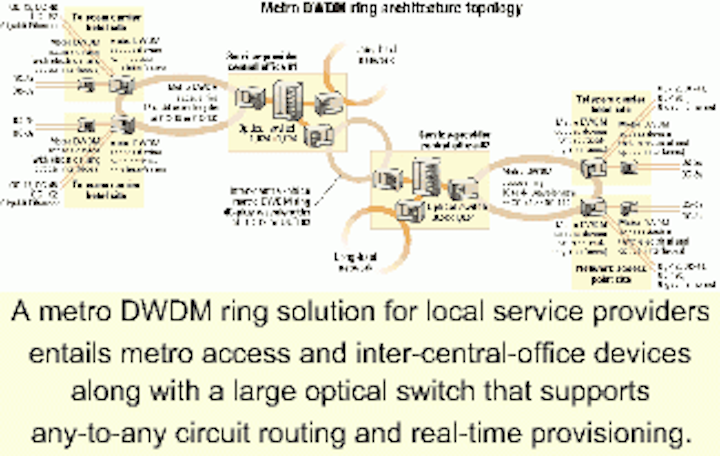 Laying more fiber in the metro today is high risk in this capital-constrained climate; a flexible DWDM architecture is the safer bet for many service providers.

Traditionally, DWDM implied long-haul applications. Today, this technology has found another killer application in metropolitan-area markets thanks to the proliferation of telecommunications carrier hotels and the insatiable appetite for bandwidth. With traditional SONET-based networks unable to deliver the bandwidth, scalability, and provisioning times required by customers in the metro markets, DWDM is quickly becoming the status quo architecture for new networks.

New DWDM systems combine advances in TDM technology with the incredible scalability of WDM, while at the same time delivering SONET-quality reliability and faster provisioning times. Every advance in TDM technology (OC-48 to OC-192, OC-192 to OC-768) increases the future capacity of WDM-based systems. After all, wavelengths are indifferent to how fast a laser can transmit "0"s and "1"s across a fiber medium. In contrast, SONET-based systems are inherently incapable of scaling beyond the high-speed optics card initially installed in the transmission equipment. Scaling with a SONET-based architecture involves the installation of new network elements and allocating additional fiber pairs to turn up a new ring, neither of which is viewed as desirable.

Taking a closer look at current metro-area markets reveals a huge shift in sources of revenue for local service providers from the incumbent local-exchange carrier (ILEC) central offices to carrier hotels and network access points (NAPs). With the current bear technology market significantly reducing capital expenditures, many long-haul carriers are scaling back plans for metro build-outs. That leaves these carriers with little connectivity to telecom carrier hotels, NAPs, and ILEC central offices within that metro area.

A typical telecom carrier hotel can house service providers, ISPs, cable heads, and several other potential customers within one building. That's even more evident with the ongoing efforts to establish NAPs. These NAPs will serve as huge traffic exchange sites for dozens of carriers and ISPs.

In either scenario, a highly scalable network architecture that supports rapid deployment is needed to accommodate the bandwidth that these carrier hotels and NAPs will demand.

In the past, SONET technology alone satisfied service-provider requirements. After all, what could compete with 50-msec protection switching-unidirectional path-switched ring (UPSR) and bidirectional line-switched ring (BLSR), circuit/power pack redundancy, ring and linear topologies, and the ability to carry voice and data traffic? 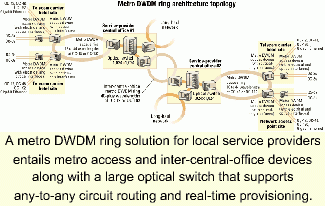 Meshed networks are nothing new to IP router-based networks at Layer 3 (network layer) of the open systems interconnect model, but this topology is fairly novel at the physical layer (Layer 1). An optical meshed network gives the service provider the ability to establish several different kinds of service-level agreements (SLAs) with the customer. Service providers can also protect and bill circuits through the network at different levels and prices.

One customer may choose a premium service with guaranteed circuit protection throughout the network, while another opts for a lower-cost best-effort protection scheme. Best-effort protection means that if the bandwidth is available to reroute the circuit in the event of a primary route failure, the circuit will most likely switch within a few 100 msec. However, if the bandwidth is not available, the customer will experience an outage. That's similar to the class-of-service features of an ATM network, in that different priorities can be assigned to different traffic. Basically, meshed optical networks allow a circuit-switched network to mimic some of the benefits of a packet- or cell-switched network. IP over an optically meshed network architecture can optimize bandwidth even further.

While meshed optical networks offer some promising advantages, most carriers are still deploying metro DWDM rings. That is mainly due to the familiarity of the ring architectures used with SONET technology and the ability of these rings to "self-heal" in the event of fiber cable or optical card failure. Customers have gotten so used to fully redundant networks (i.e., SONET/ SDH), that it is difficult for service providers to imagine offering a service that may not reroute a circuit in the event of a failure. Most likely, service providers initially will deploy metro DWDM solutions with ring topologies, then slowly migrate toward meshed architectures. That will put pressure on DWDM equipment vendors to make this migration as painless and cost-effective as possible.

Metro DWDM ring architectures involve three areas of connectivity: the metro access, the metro core, and the intra-metro central office, as shown in the Figure.

DWDM access devices for the metro must be capable of delivering robust services and highly scalable-16 to 44 protected wavelengths. Most DWDM equipment vendors do not make a highly scalable access device that can hand off tributaries from a DS-3 (44.736 Mbits/sec) to an OC-48c (2.4 Gbits/sec). The solution usually involves a dual-device scenario: a smaller DWDM device to handle the DS-3 to OC-3 (155.52-Mbit/sec) circuits and a larger, more scalable DWDM device to handle OC-12c (622.080-Mbit/sec) to OC-48c and even OC-192c (9.952-Mbit/sec) circuits.

The smaller device uses a wavelength and subtends off of the larger device. Wavelength efficiency is achieved by multiplexing lower circuit rates (OC-3, OC-12) to an OC-48 level before traffic is sent out over a wavelength. These DWDM access devices can accommodate a variety of services, including SONET/SDH, GbE, ATM, and IP, allowing service providers to cater to several types of customers without deploying different access devices. The idea is to push the intelligence as far to the edge as possible to allow for a faster, more transparent core.

The metro core of the network is where many DWDM equipment vendors fall short. That's because the core device, an optical switch, cannot always handle the volume of traffic from the metro-access devices. A large, highly scalable optical switch of 256x256 OC-48 bit rates (scalable to 1,024x1,024) that can manage traffic down to the DS-3/STS-1 level is necessary to allow service providers to switch from DS-3 through OC-192 levels from anywhere to anywhere in the network. Signal regeneration is also done here because the metro DWDM access devices do not typically perform this task. This large optical switch allows circuits from metro and long-haul networks to terminate on one device and one switch fabric.

Such connectivity gives the service provider the ability to set up and tear down circuits with a simple point-and-click in the management software. It is important to make sure the equipment vendor has one management software platform that can see and manage every device in the network to give provisioning engineers the ability to rapidly deploy services. What that means is significantly reduced provisioning times and less manual labor needed to perform crossconnections between devices and rings. The optical crossconnect is really the new digital-crossconnect system for the optical network, giving the service provider the incredible ability to manage and groom circuits from the DS-3 to OC-192 level.

The last piece of the metro DWDM architecture is the device that connects the optical switches. This device is usually some scaled down version of the long-haul DWDM family, and in many cases, the same device. Typical configurations can be 40+ protected wavelengths, and in some cases, the devices use a 4:1 OC-192 card to allow for better wavelength efficiency. This device also terminates on the optical switch to allow for a point-and-click architecture between central offices. Understanding these three points of connectivity and the importance of a single management software platform to manage these points of connectivity gives a comprehensive overview of an ideal metro DWDM architecture (see Figure).

As service providers try to differentiate their services from competitors, scalable, reliable, flexible, point-and-click optical DWDM metro architectures offer a promising solution. Carriers that take advantage of this technology now will be well positioned to compete in the dynamic metro market.