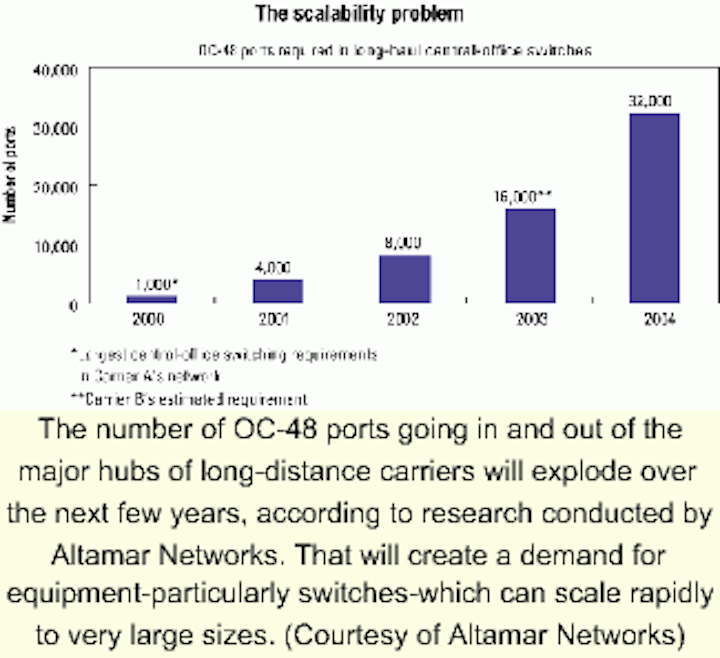 A pair of recent announcements in the optical-core-networking space illustrate that while vendors may agree on some trends-in this case, the trend toward integration of multiple functions into the same piece of equipment-they may diverge on others. Both Altamar Networks (Mountain View, CA) and Cinta Networks (San Jose, CA) have announced hardware that combines switching and DWDM transport functions in a single system. However, their switching technologies reveal different views about customer requirements for all-optical networking.

Altamar, a subsidiary of Ditech Communications, unveiled its Titanium Optical Network System at this year's Optical Fiber Communications (OFC) conference. According to Ian Wright, the company's senior vice president of engineering, and Marc Schwager, vice president of marketing, the Titanium unit will handle a massive number of lines-16,000 ports of OC-48 (2.5 Gbits/sec) in its first release, scalable to two million ports in future versions. At the same time, it also provides switching capacity that can grow to as high as 5.5 Pbits/sec. With these large numbers providing room for growth, the Altamar sources say the system will scale economically from a low of eight ports. Meanwhile, the integration of such diverse functions in a single system cuts down on the time to provision new services, say Wright and Schwager.

By combining switching, transport, network-management, and network protection functions in the same system, Altamar claims its offering will provide space and power savings of 100x over typical SONET/SDH approaches and 10x over current optical switches. Such cost savings will be important to long-haul carriers that will need to accommodate very large line counts in their major hubs, say Wright and Schwager. They report that one prospective customer estimated that its largest switching centers faced the challenge of handling 1,000 OC-48 ports last year, while another projected a top-end count of 16,000 in 2003 (see Figure). 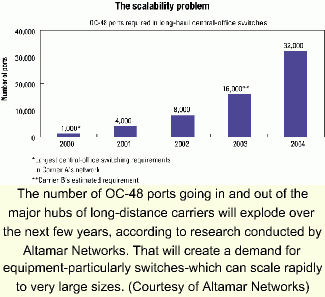 The number of OC-48 ports going in and out of the major hubs of long-distance carriers will explode over the next few years, according to research conducted by Altamar Networks. That will create a demand for equipment-particularly switches-which can scale rapidly to very large sizes. (Courtesy of Altamar Networks)

To handle such port counts efficiently, the Titanium system combines a transponder shelf, optical-switching shelf, and optical transport shelf into a single 7-ft bay. (The transport shelf provides amplification, multiplexing/de multiplexing, dispersion compensation, and related functions.) In addition to switching and DWDM transport, the system also will add or drop traffic in increments of OC-48. For protection, a network of Titanium units would link in a mesh function but create virtual rings. The result is restoration times on the scale of SONET/SDH-50 msec-without the necessity of withholding bandwidth for protection purposes.

To continue to support high speeds, the Titanium system has been designed to operate at internal speeds of 3 Gbits/sec. Altamar supports such speeds between shelves and racks via an optical backplane that comprises 12-fiber ribbon cable driven by vertical-cavity surface-emitting lasers (VCSELs). The backplane will support transmission distances of 200 m to provide flexibility in the location of equipment racks as carriers expand.

Meanwhile, John Vaughn, president and CEO at Cinta, agrees that integrating switching, DWDM, and other transport and protection functions in a single system is the right approach for core networks, particularly those in the regional and long-haul (as opposed to ultra-long-haul) applications the company intends to target with its initial offering, the WaveJunction LS3000.

Like Altamar, Cinta sees small footprint, low power, flexibility, and easy scalability to large sizes-in the case of the LS3000, more than 4,000 ports in its initial configuration-as essential to its potential customers. The system will support OC-48 and OC-192 interfaces and such protection schemes as optical unidirectional path-switched rings and bidirectional line-switched rings, as well as mesh. Supported transmission distances without recourse to regeneration include 600 km at OC-192 (10 Gbits/sec) and 1,500 km at OC-48.

The LS3000 works all-optically-almost. The system accepts wavelengths from other LS3000s or DWDM equipment, routers, and crossconnects from other vendors, performs the preamplification typical for signals coming off a long-haul run, then passes the signal to a wavelength converter. The converter performs an optical-to-electrical conversion to enable monitoring of the SONET or digital-wrapper overhead. The system then reconverts the signal to light for wavelength conversion as necessary via tunable lasers, then switching by the system's optomechanical switch fabric. The fabric is initially available in 256- and 1,024-port sizes. Node capacity runs from 2.5 Gbits/sec to 160 Tbits/sec.

The system supports provisioning via the Optical Internetworking Forum's user-to-network interface scheme as well as its own algorithms that enable vendors to tailor provisioning and protection on a least-cost or shortest-route basis. The network-management system (NMS) oversees the network as a single node, in that all nodes have full network knowledge. The NMS can manage wavelengths independently, regardless of whether the network is operating in a ring or mesh configuration.

The combination of multifunction integration and scalability enables significant cost savings, says Vaughn. Cinta currently claims an initial deployment savings of up to 50% over competitive approaches and an operational savings of up to 80%.

The LS3000 will debut this summer. Future releases of complementary products include a dynamically reconfigurable optical add/drop multiplexer either late this year or early next year, a 4,096-port switch fabric, an OC-768 port card, 10-Gigabit Ethernet and Fibre Channel port cards, support for generalized Multiprotocol Label Switching, and CORBA and SNMP network-management capabilities.

While the two offerings share a common vision of the integration and large port counts that carriers may want in the core, the two don't share the same view of the switching technology that will best meet customer needs. As already indicated, Cinta favors an all-optical fabric. Altamar, however, feels that an electrical matrix best meshes with its view of technical realities and carriers' current infrastructure.

From Cinta's perspective, an all-optical-switching matrix promotes bit-rate independence and lower per-port costs. As traffic speeds eventually increase to 40 Gbits/sec, the system will be able to accommodate these speeds without changing the switch fabric. On the other hand, Altamar doesn't believe that all-optical switch fabrics necessarily imply all-optical networks, since most optical fabrics require some sort of transponder to interface with other equipment and provide full functionality. At the same time, the electrical base of the switch enables a very large matrix with existing technology. While smaller optical fabrics may be linked together, such configurations are more expensive, complex, and waste ports, the company believes.

Additionally, Wright expresses doubts about the willingness of some carriers to follow the drumbeat for Internet Protocol (IP) directly over the optical layer, one of the drivers often cited for the desirability of all-optical networks. In many carriers, says Wright, transport functions and decisions are made in one department, while IP service management and switching oversight resides in another. Wright believes that many transport departments don't entirely trust IP as the foundation for all routing and restoration decisions.

It's much too soon to place bets on which switch-fabric approach will win the hearts of long-haul carriers says David Krozier, a senior analyst at RHK Inc. (San Francisco). In fact, the choice won't be limited to just these two companies, as vendors such as Iolotron, LuxCore, and Corvis have approached the market with similar integrated offerings.

"What you're dealing with is a group of companies who are all out to tackle the same market space with slightly different implementations," Krozier says. "And there, the continuum goes from 'there's nothing electronic in the data path' to 'we only have a little bit of electronics' to 'we've got a whole bunch of electronics.'"

Both electronic- and optical-switching approaches simultaneously hold promise and raise questions, particularly when it comes to what Krozier expects will be the real deciding factor-cost. For example, electronic fabrics enable the large initial port counts Altamar offers. "Then you get into the whole issue of what happens when rates change and I have to upgrade things." Krozier points out. "I think you also get into how does it play dollar-wise, both in the first-cost installation and the lifecycle cost, if you have to deal with upgrades?"

Alternatively, all-optical approaches must deliver more than promises. "The argument of replacing all those electrical conversions with photonics is a nice one, but then again are some of the photonic components, modules, and subsystems really cost-competitive with doing things electronically? If you're going to replace a transponder with some device that's going to perform optical regeneration and wavelength conversion photonically, it better cost less than an O-to-E-to-O transponder, otherwise why do it?" Krozier asks.

Thus, Krozier believes, the bottom line will be the bottom line when it comes to making equipment choices. "The technology is all interesting and nifty," he concludes. "But if I were the carrier and I wanted to commit to this kind of approach for building my network, it would be important how much it's going to cost. They're less enamored with the technology than some of us and more concerned about making money-especially these days."

Whatever the purpose, all articles, product announcements, and advertisements in Lightwave can be reprinted to suit your informational needs. For information, contact Kathleen McIntosh at: (603) 891-9203, fax (603) 891-0587, or e-mail: kathmc@pennwell.com.