Ethernet in the wide area network 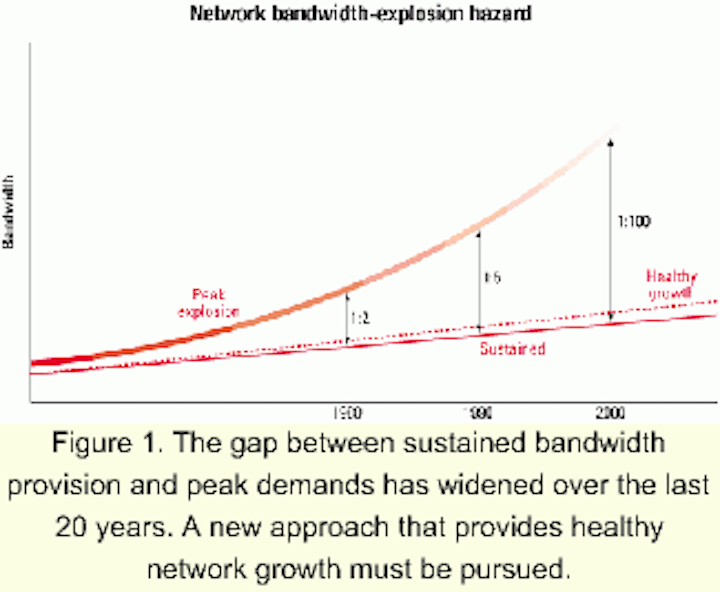 To multiplex or not to multiplex? That may be the question-and intelligent multiplexing the solution.

The information age is triggering phenomenal growth and increasing competition in the telecommunications and information industry. Facing the unprecedented development pace of Internet Protocol (IP)-driven applications, operators and service providers are putting more efforts into building a scalable network able to support current and future services and traffic requirements.

A lot of investment was made in the last few years to open the bandwidth bottlenecks in core and metropolitan networks. These efforts are now bearing fruit with the deployment of DWDM equipment, converting the metro network into an optical architecture. As businesses move more mission-critical and bandwidth-hungry applications to the 'Net, and service providers try to provide for their customers' needs from their edge points of presence, the access network remains the last choke point in the service delivery chain.

Ethernet technology is by every measure the predominant technology in the enterprise LAN, winning the race against ATM to the desktop. With bandwidth ranging from 10 Mbits/sec to 1 Gbit/sec and future 10 Gbits/sec, Ethernet can support all enterprise bandwidth requirements.

The popularity of Ethernet in the LAN, coupled with the Ethernet interfaces on DWDM metro equipment, makes its extension into the access and the wide area network (WAN) a logical step. But is Ethernet, as we know it, really suitable for WAN applications?

At the same time, a lot is said about SONET multiplexing's inadequacy for the new data-centric era. But is multiplexing an outdated concept, or can it be intelligently modified to meet the new access and WAN requirements? Can "Ethernet all the way" fully replace SONET multiplexing and other features such as protection in satisfying emerging needs?

We're proposing an evolutionary approach that blends the benefits of SONET and Ethernet without losing any of them.

The new age of telecommunications deregulation spawns a multitude of new service providers and carriers. These carriers are targeting the business community, since this sector is the most lucrative. On the other hand, business customers become more and more dependent on telecommunications services for their operations, including production, deliveries, billing, and so on.

After introducing WDM in their core and metropolitan networks and solving the bandwidth bottleneck at these network layers, operators encounter the "last mile," i.e., access network, problem. The traffic paradigm at this network layer is shifting from traditional and predictable time-division-multiplexing (TDM)-based to IP-based and unpredictable. Large numbers of packet-populated physical links have to be delivered to central offices and data centers, and between customers' locations, where switches, routers, and servers are deployed.

In the carriers' competitive environment, the network-mainly the access network-becomes a tool for delivering services. Services and applications shall be the differentiating factor between service providers. To be able to win customers for the long run, service providers must ensure service-level agreement (SLA) per end customer and quality of service (QoS) per application. To varying degrees, these challenges can be met by the service layer. However, only the transport layer can answer other challenges such as protection.

Taking into account these issues, the new-generation access network should comply with most of the following requirements:

Although the majority of new applications are IP-based, it will be a mistake to think that the network should carry only IP. Serving only one protocol defies the long-established layered model. This model-starting from the physical layer, going through the transport layer, and terminating at the service layer-was established for three very good reasons.

In today's world, some services can be supported by different protocols. But to be able to carry these services, the network should be fully agnostic to these protocols. An access network able to effectively carry IP traffic only cannot handle voice-over-digital-subscriber-line (VoSDL) services, legacy TDM, or frame relay without protocol conversion. Protocol conversion is a costly process in terms of equipment price and network manageability.

One of the advantages of a SONET/ SDH-based network is the ability to carry all types of Layer 2 protocols over its fixed trunks. But even using SONET/SDH required a minimum of conversion, an adaptation of asynchronous traffic to synchronous TDM format. To avoid these costs and be able to serve higher service layers as efficiently and cost-effectively as possible, the next-generation access network must be protocol-agnostic, transporting all Layer 2 protocols in their native form utilizing standard customer and trunk interfaces.

The ubiquitous application protocol within the enterprise network is IP, and it's no wonder that the commonly used interface to carry these applications is Ethernet. As more and more traffic is directed from the enterprise LAN to the public WAN, it is more than reasonable to assume that Ethernet will migrate as an interface and service to the WAN, providing a seamless connection between the two.

There are a number of reasons why Ethernet became the prevalent interface in the LAN:

To be able to really migrate and become a widespread interface and service in the public WAN, and especially in the access network, Ethernet's deficiencies must be overcome without losing Ethernet's evident benefits.

SONET and SDH were designed as a replacement to Plesiochronous Digital Hierarchy (PDH) to overcome some of the latter technology's disadvantages. The main improvement SONET/SDH brought to the circuit-switched world was the structured framing concept. Structured framing enabled additional functionality over PDH, including:

Although more costly than PDH, the above improvements, coupled with an improved multiplexing scheme, transformed SONET/SDH to the most commonly used transport technology in core, metro, and access networks. 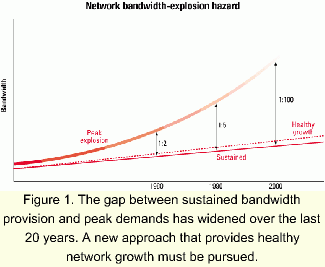 Figure 1. The gap between sustained bandwidth provision and peak demands has widened over the last 20 years. A new approach that provides healthy network growth must be pursued.

Looking into SONET/SDH's strong points, it is evident that they provide a solution to three of Ethernet's disadvantages. There are two other issues to be solved with Ethernet to be able to migrate it to the WAN. If a solution within SONET/SDH can be found for the best-effort and security issues, coupling SONET/SDH and Ethernet will provide a winning team for the new-generation access network.

In the last two decades, we have witnessed a growing gap between the required sustained bandwidth and the required instantaneous peak bandwidth (see Figure 1). This phenomenon is expressed both at the single-customer level and network level. Providing the end customer with extra bandwidth and designing a network for peak requirements will create a bandwidth explosion. To prevent future explosion, a new mechanism should be tried that will enhance network utilization and provide healthy network growth in terms of bandwidth. One of the possible mechanisms to look at is traffic multiplexing.

Multiplexing is not a new concept. SONET/SDH has created a virtually infinite hierarchical multiplexing scheme. However, this scheme is by no means intelligent. Rather, it is a brute-force approach that consumes bandwidth regardless of demand.

Intelligent multiplexing shares the bandwidth among multiple users, while preserving complete segregation among their traffic. Bandwidth sharing follows the respective SLAs of different users as well as accommodates instantaneous demand. By doing so, intelligent multiplexing dramatically increases the number of users served by a given infrastructure. It allows healthy growth rather than a capacity explosion.

Intelligent multiplexing also shares bandwidth among the various traffic classes of any single user. These are prioritized according to user policy. Thus QoS required by different traffic classes is preserved.

Last but not least, intelligent multiplexing deals in bandwidth, not in IP packets or ATM cells. Its SLA is expressed in protocol-agnostic (rather than protocol-specific) terms.

Value-added services are often identified with Layer 3 and higher. That is the truth but not the whole truth. In fact, there is a gold mine of added value in Layer 1 waiting to be uncovered. Some examples of Layer 1 added value are ability to bundle the resource, consumed by different traffic classes of any single user; modify existing SLAs based on time-of-day or any other criterion; and share bandwidth between various locations of a corporate entity. 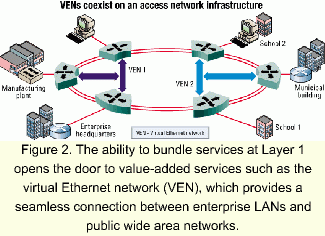 Figure 2. The ability to bundle services at Layer 1 opens the door to value-added services such as the virtual Ethernet network (VEN), which provides a seamless connection between enterprise LANs and public wide area networks.

Figure 2 shows one value-added service that can be offered using the ability to bundle resources at Layer 1. The illustration shows two separate and secure virtual Ethernet networks (VENs) coexisting over the same access network infrastructure. Each VEN enjoys its own assured SLA, while traffic integrity of each VEN is assured by the intelligent multiplexing scheme implemented in the ring's network elements.

Ethernet's simplicity coupled with SONET/SDH carrier-class features is ideal to answer today's challenges. Intelligent multiplexing is the glue between these two.

Protocols change. In the long run, Ethernet's popularity may be surpassed by another protocol. Similarly, alternative media may replace SONET/SDH. Intelligent multiplexing is here to stay.