Optical CDMA refocused for the metro 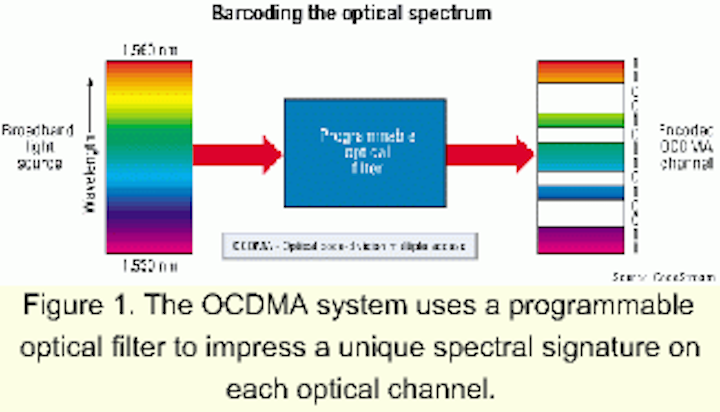 A few years ago, fiber exhaust was the problem and DWDM became the buzzword in response. Yet, at about the same time, optical code-division multiple access (OCDMA) emerged as an alternative solution for fiber exhaust. DWDM remains a leading technology for many network applications. But with a new focus on the metro environment, proponents of OCDMA are not yet ready to concede defeat.

An OCDMA system starts with an incoherent broadband light source and derives its channels by selectively blocking out parts of the light, giving it the appearance of a barcode. This technique creates the individual characteristics and distinguishing signatures of the channels that can carry data moving at different speeds and formats (see Figure 1). Individual transceivers tap into these channels at any point, allowing information to be securely broadcast and received from anywhere on the network.

OCDMA compares closely with DWDM in its approach to provide more cost-effective transport, provisioning, and protection of multiprotocol traffic. While DWDM divides the fiber spectrum into narrow optical wavelengths, each derived from an individual laser, OCDMA divides the fiber spectrum into individual codes, all derived from a single optical source. 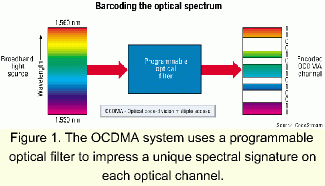 Figure 1. The OCDMA system uses a programmable optical filter to impress a unique spectral signature on each optical channel.

Commercial Technologies Corp. (CTC), a Texas-based optical telecommunications system manufacturer, was among the first to offer OCDMA as a less expensive alternative to DWDM and a slightly different approach to developing optical networks (see Lightwave, September 1998, page 54). DWDM incrementally adds cost and equipment to a network architecture that was already too expensive to serve the majority of the business community, said advocates such as CTC. Conversely, OCDMA boasted the ability to increase the efficiency of existing fiber and offer a significant reduction in the necessary fiber count for future builds as well as the elimination of the intermediate time-division multiplexing (TDM) steps required in conventional SONET infrastructure. Additionally, the network could be simplified by eliminating layers of network elements.

Commercial Technologies no longer exists as a company. A group of venture-capital investors purchased the intellectual property rights from the parent company and formed a new entity, CodeStream, whose patented implementation of spectral OCDMA has been in development for about two years. During that time, and particularly in the last six months, CodeStream has made significant breakthroughs that might cause fiber-optic network builders to take another look at OCDMA technology.

"A variety of both fixed and programmable encoding techniques have been developed," says John McIntosh, CodeStream's vice president of corporate development, "and the mechanical packaging of the technology has been reduced by an order of magnitude. Many of the advances to OCDMA technology have been enabled by improved optical-component designs originally developed for DWDM platforms."

The new system is designed to address an acute choke point in metropolitan networks, specifically the connection of high-speed edge devices to the high-speed, long-haul network. McIntosh believes that neither SONET nor DWDM are particularly well-suited for addressing this issue. OCDMA can either coexist with 1,310-nm SONET systems on the same fiber, or the SONET line can ride as a channel on the OCDMA network at speeds up to OC-48 (2.5 Gbits/sec). In that role, OCDMA can extend the service life of SONET devices by offloading broadband access and transport functions that quickly exhaust capacity. OCDMA systems can also connect to long-haul DWDM systems by way of industry-standard short-reach interfaces.

"We are targeting the metropolitan area network," says McIntosh. "We plan to market our products to companies that have a requirement to aggregate or distribute traffic in a metro area and are delivering data-oriented services in addition to the traditional service types. We will appeal initially to companies that have the vision and wherewithal to adopt new technology. This list of players includes local-exchange carriers, wireless operators, cable companies, collocation companies, utility companies, and interexchange carriers."

CodeStream's focus on the metropolitan space, particularly the edge, is no accident. According to telecommunications industry analyst firm RHK Inc., the addressable North American market for optical edge devices will grow to $10 billion by 2004. OCDMA will compete for this market with SONET, DWDM, and digital-crossconnect systems.

"OCDMA, as implemented by CodeStream, is a better fit for the shorter distances, frequent reconfigurations, and variable payloads of the metro network than the long-haul network," says Karen Liu, senior analyst at RHK. "A variety of alternative technologies, some of them offered as hybrids with DWDM, are trying to fill a gap between what DWDM offers and what functionalities are really needed. Flexibility in terms of both payload size and the code assignment are strengths of OCDMA."

A major differentiator between traditional DWDM and OCDMA is the light source. DWDM requires multiple discrete frequency lasers for transmitting data over each channel. That means stocking multiple light sources at every point where channels are added or dropped from the network. OCDMA uses a common broadband light source, selectively blocking out parts of the light and dynamically changing the "barcode" to enable rapid service provisioning and reconfiguration.

OCDMA not only offers streamlined service provisioning, but also can accelerate time-to-revenue and reduce operating and administrative costs. Rather than replacing legacy systems, the technology complements them. OCDMA has a unique physical topology. It is an optical bus rather than a series of point-to-point multiplexers. Each channel operates independently of all other channels on the fiber. This broadcast traffic may be dropped or added at any physical point on the fiber without the necessity of demultiplexing and remultiplexing other channels on the fiber. 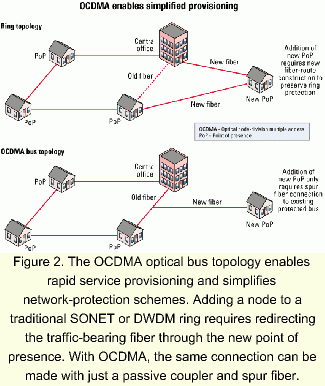 Figure 2. The OCDMA optical bus topology enables rapid service provisioning and simplifies network-protection schemes. Adding a node to a traditional SONET or DWDM ring requires redirecting the traffic-bearing fiber through the new point of presence. With OCDMA, the same connection can be made with just a passive coupler and spur fiber.

One practical implication of this design is the ability to use passive optical couplers to attach new revenue services to the fiber (see Figure 2). These couplers do not require special environmental enclosures or rack space and can even be installed in both underground and aerial applications. Therefore, the service provider can avoid the lead time associated with arranging real estate to install multiplexing nodes. OCDMA only resides at the entry and exit points on the network.

"Our implementation features remotely programmable encoder/ decoder technology, meaning the transport network doubles as an optical-crossconnect device, as well," says CodeStream's McIntosh. "These fundamental advantages translate into faster implementation of new services and reduction or elimination of truck rolls to re-provision connections once they go into service."

Despite the promise and benefits of OCDMA, it is still a relative underdog in terms of popularity in the telecommunications industry. Currently, CodeStream boasts of having the first commercially viable implementation of OCDMA technology tightly in hand. However, McIntosh says the industry will soon hear and see much more discussion about the benefits of this new form of photonic multiplexing.

"I think the trend that will catch on in the future for optical networking is for service providers to find solutions that allow them a faster provisioning of their services," says McIntosh. "The providers don't want to have to wait six to nine months to get up and running on new systems. They want something that is more flexible and simpler than current technology without having to displace their current infrastructure."

With much of the industry focused on all-optical networking, McIntosh believes OCDMA will plant its own stake in the ground. The technology offers the remote provisioning elegance of SONET, combined with the bandwidth horsepower of DWDM in a topology that is faster and simpler to deploy. It could be the enabling technology to move broadband services from traditional TDM devices originally designed to handle narrowband services. The key, however, could be to focus on one of today's hottest networking segments: the metropolitan area.