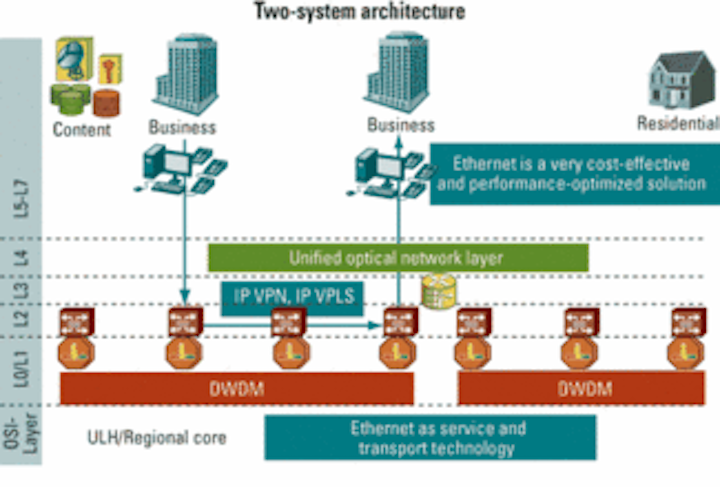 By Hans-Juergen Schmidtke and Alan Gibbemeyer

A new network is emerging for delivering media-rich and bandwidth-hungry content, applications, and services. Traditional SONET/SDH architectures, developed for the narrowband world of a generation ago, are overloaded. Such practices as stacking SONET/SDH rings to increase capacity are complex and costly, while Ethernet-over-SONET/SDH protocol conversions waste tremendous bandwidth.

Aside from its high bandwidth capacity, DWDM’s key advantages are its ability to easily transport these newer data protocols and effectively collapse current network overlays by eliminating optical-electrical-optical (OEO) conversions. OEO conversions are the major cost drivers in today’s transport network, both in terms of investment capex as well as the long-run operational costs. From a topology and service delivery point of view, meshed-capable Ethernet and a meshed DWDM layer are the perfect match.

The rising adoption of high-bandwidth multimedia applications has generated an exponential rise in packet traffic-mostly Ethernet-that needs massive and independently scalable real-time ingest and streaming capabilities, along with colossal storage capacities. Plus, it needs ingest and streaming to be separated for the sake of efficiency and quality-of-service (QoS)/quality-of-experience (QoE) guarantees. 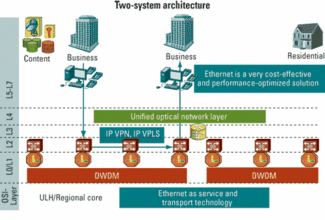 Figure 1. A two-system DWDM network with Ethernet as a transport technology proves inefficient because it creates underutilized ports.

In response, service providers are building their metro and regional networks to handle today’s demands while both supporting legacy TDM services and keeping an eye on tomorrow’s needs. Service providers have quickly realized the legacy technologies in today’s metro networks lack the dynamic functionality and scalability to handle the ever-increasing bandwidth demands from the access network at the requisite QoS/QoE level.

The challenge that service providers are faced with is finding the right carrier-grade network elements that offer cost-efficiency, simplified operations, and scalability to meet the exponentially increasing packet-based bandwidth demands resulting from the adoption of these new services. Operators have to figure out how to cost-effectively move these multiple-service offerings without compromising operational efficiency.

To remain competitive today, service providers need to move away from legacy transport networks such as SONET/SDH and Frame Relay toward highly reliable and intelligent DWDM networks. DWDM transport networks reduce fiber requirements by unlocking the embedded capacity of existing fiber infrastructures. The idea is to use fiber not to transmit signals just on a single wavelength but to convey them through the same fiber over multiple wavelengths to better utilize almost unlimited fiber-optic capacity.

The reason for the strong growth is that DWDM offers greater transport and operational efficiencies. Because of its bit-rate and protocol-independent nature, service providers can collapse current overlays and seamlessly support the increasingly ubiquitous newer low-cost protocols, such as GbE and 10GbE, in their native formats. A DWDM network, when combined with Layer 2 Ethernet switches, enables service providers to achieve operational efficiencies and savings while also positioning themselves for future revenue-generating services.

The cost savings of the duo are significant. According to a Metro Ethernet Forum (MEF) study based on a 3-year build-out of a medium-sized metro network, a network based on optical Ethernet design principles costs half as much to operate as a legacy SONET/SDH-based network.1

On the optical core side, capital savings of about 30% can be realized when an automated DWDM regime replaces a legacy transport network. The savings come from reduced OEO conversion plus the initial build capital reduction due to a futureproof and scalable network design. On top of the capital savings, human effort is also reduced for service provisioning and operations, resulting in up to 80% savings in operational expenses over time. 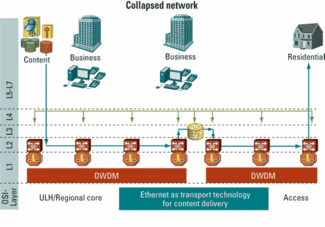 In addition, significant technology advances are occurring in the areas of intelligent optical DWDM line systems. These include systems incorporating reconfigurable optical add/drop multiplexers (ROADMs), which more than make up for their cost by eliminating the need for costly OEO conversions and truck-rolls for service provisioning, and even photonic crossconnects that enable transparent optical mesh architectures. Another big advance comes from distributed control mechanisms like Generalized Multiprotocol Label Switching (GMPLS) that help provide intelligent management of data capacity and throughput.

Although there are many more reasons to adopt Layer 2 Ethernet switching over DWDM, here are five of the most compelling reasons why service providers should consider deploying this next-generation optical network technology today.

1. Eliminate network layers while reducing complexities and equipment costs. A DWDM optical transport network can extend from the core to the edge and access networks. ROADMs can eliminate the complex OEO layer, thereby reducing the number of network elements. For example, traffic that needs switching or routing can be dropped to an appropriate device while traffic that would not benefit from sub-lambda packet processing can be optically switched. In effect, this collapsing of the optical network layers dramatically reduces network complexities and operating costs.

Now add to that carrier-grade Layer 2 Ethernet for transport, aggregation, and switching. Carrier Ethernet has proven to reduce capital expenses as well as operating expenses without compromising the availability of the delivered services and QoS. The fact that next-generation network applications are typically native packet-based applications makes this packet-based approach especially effective. The costly transformation from packet to TDM and back is avoided and a full layer of transformation is eliminated. 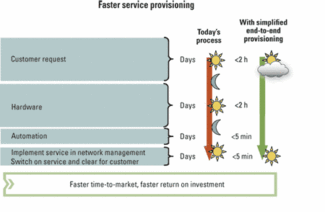 In addition, a collapsed Layer 2 Ethernet over DWDM network uses less power and rack space and offers very high scalability at a much lower cost than traditional TDM-based networks.

By combining packet-processing intelligence and optical-wavelength assignment into a single system, effectively collapsing the network, service providers can avoid excessive inventory as well as the restrictions imposed by per-port protection. An integrated Layer 2 over DWDM network allows these services to be separated and then protected differently. The end result is a cost-effective system that makes better use of its resources. A two-system architecture (Figure 1) would require the flows to be broken up according to service level, resulting in underutilized ports. The key, again, is creating the optimal mix of port protection and QoS supported on a single system.

However, a collapsed network (Figure 2) overcomes the two-shelf restrictions and aggregates the flow directly into the DWDM optical transport wavelengths to optimize bandwidth efficiency and costs.

A regional or core network with Layer 2 Ethernet over DWDM can benefit by keeping within the optical layer those wavelengths that don’t require LER/LSR routing while traffic requiring LSR is dropped out to a “switching” portion of the DWDM system. This means only traffic that requires switching leaves the optical layer-a significant savings in both capital and operational expenses.

4. Automate network management for scalability and reduced operating expenses. A single, automated network management system within a Layer 2 Ethernet over DWDM network can provide full support for all management tasks from the element layer to the service layer, as well as an overall network view of the complete next-generation optical network. The system should be able to scale within wide limits to provide customized and cost-optimized network management. This “pay-as-you-grow” concept allows operators to start with a cost-effective system and gradually add more elements and capacity as the network demand increases.

It should also support the new generation multiservice provisioning platform (MSPP) networks, and should be flexible enough to stand alone or be integrated into the network management system, thus providing a seamless extension of the existing management network. To support SONET and SDH interfaces, TDM circuit emulation support is required. Data layer management-Layer 2 switches, for example-virtual LANs or resilient packet ring networks are handled within a single network management platform.

5. Detect problems automatically and resolve them faster across the entire network. With a Layer 2 Ethernet over DWDM network, a much higher resiliency and drastically simplified operations can be achieved. An integrated architecture can support very intelligent protection mechanisms with shared protection over different OSI layers.

In addition, enhanced alarm correlation and troubleshooting simplify the network level for root-cause determination and problem resolution across the entire DWDM network. For example, a dropped signal typically causes alarms to go off everywhere in the network-across amplifiers, multiplexers, transponders, and other network elements. A collapsed network is able to correlate and isolate the problem to the direct source much faster, eliminating unnecessary alarms in the network and resolving problems more quickly. It also immediately pinpoints critical issues with powerful alarm logging, alarm filtering, repetitive alarm suppression, and intelligent root-cause alarm correlation functions across packet and optical domains.

The DWDM transport network, combined with Layer 2 Ethernet switching, enables unprecedented dynamic data capacity and throughput sharing and distribution across multiple ports, blades, and complexes. Such a network drastically improves resiliency and availability as well. The Layer 2 Ethernet packet-switch technology is especially optimized for the next-generation network traffic that is dominantly and natively packet-based.

These capabilities enable service providers to drastically cut equipment and operational costs; reduce complexities in the network by eliminating/collapsing layers within the network; make better use of network resources to achieve optimal bandwidth efficiency; offer the highest service availability through a single-automated network management approach that gives an overall view of the complete next-generation optical network; and easily scale to handle tomorrow’s nearly limitless bandwidth demands.