The challenges of migrating to high-capacity DWDM systems

Several carriers are moving to high channel counts before they tackle data rates above 10 Gbps. 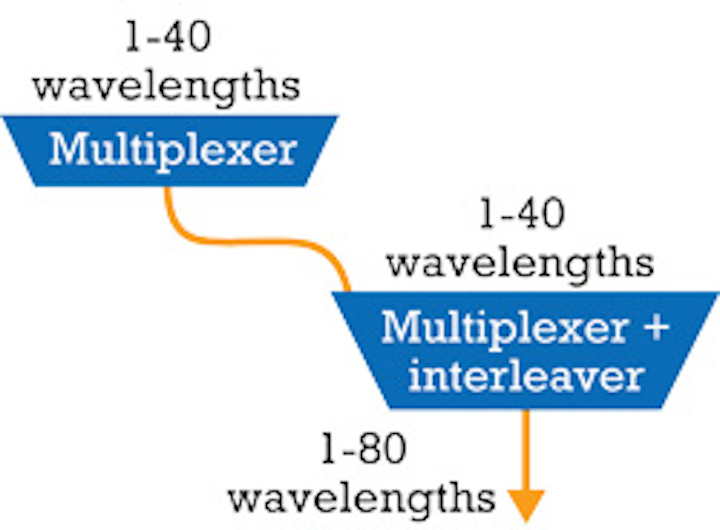 Surging demand from IP traffic, cell backhaul, and video applications has placed severe strains on fiber routes. For example, a cell site with three or four wireless providers that in the past only needed a few DS-1s per wireless provider now may require bandwidth of 300 Mbps to 1 Gbps per wireless provider. Compounding this problem is the aggregate demand from 30 to 50 cell sites on a network that may have been designed for a few SONET/SDH systems. Simply put, the capacity of yesterday’s networks will not be adequate for today’s bandwidth demands.

Carriers considering a DWDM network to solve this problem generally prefer to minimize initial cost, with the option to increase investment as improved sales revenues warrant. However, when the potential exists to grow a system to as many as 80 DWDM wavelengths, certain capabilities must be implemented from the beginning.

Three elements are critical to success when planning high-channel-count DWDM systems. They include the multiplexers and demultiplexers themselves, the optical amplifiers, and the dispersion compensation modules.

Multiplexers and demultiplexers: There are two major considerations in selecting multiplexers for an 80-channel system:

Meanwhile, DWDM filters with a Gaussian filter shape have significantly more loss variation across the passband compared to a flat-top filter shape. A flat-top filter will have nearly uniform loss across the passband. This is significant if SFP- and XFP-based transponders are used because their lasers can have five times the wavelength drift as fixed lasers. If Gaussian DWDM filters are used with SFPs or XFPs, then the loss variation between wavelengths across multiple nodes could be significant.

Combined with the spectral gain variation of EDFAs, the difference in power levels of individual wavelengths can become significant and degrade performance. One way to address this is to use flat-top filters. Another method would be to deploy reconfigurable optical add/drop multiplexers (ROADMs) in conjunction with an optical-channel-monitor (OCM) device for remote power measurement and balancing.

The per-wavelength power of the 80 wavelengths would require EDFAs with a total output power of +20 dBm. If higher-powered EDFAs had been placed initially, the DWDM network would be capable of supporting 80 wavelengths and existing services would not experience service degradation.

Dispersion compensation modules (DCMs): Some older DWDM systems use dispersion compensating fiber (DCF) instead of fiber Bragg grating (FBG)-based DCMs. The DCF may be able to compensate for up to 80 wavelengths but has considerably more loss and exhibits nonlinear behavior for higher input powers.

Alternatively, a continuous-band FBG DCM could be placed initially. These have low loss and are tolerant to high input power and provide dispersion compensation across the entire DWDM band. They are slightly more expensive than channelized FBG DCMs but would enable growth to 80 wavelengths and even 120 or 160 wavelengths with 25-GHz or 12.5-GHz spacing, respectively.

The following three elements are extremely important and almost indispensible in a higher-capacity DWDM system. These elements become especially relevant as more wavelengths are added and the complexity of the system increases.

80-channel ROADMs and automatic power balancing: ROADMs will be a must in an 80-wavelength DWDM system for anything more than a simple point-to-point network for two primary reasons:

Each time a wavelength is added or removed, the per-wavelength power of the remaining wavelengths changes. As mentioned previously, a ROADM node that incorporates an OCM can automatically read and adjust per-channel optical power to appropriate levels. The OCM can display power levels of all wavelengths and enable remote monitoring of the power of individual wavelengths via a management system (see Figure 2).

Engineering and planning for ring and mesh service configurations: The design of a fully loaded 80-channel DWDM network is complex on a point-to-point system but becomes very complicated with ring or mesh architectures. The design of a 20- or 30-node optical DWDM ring or mesh could easily become so complex that it would literally take days or possibly weeks to perform by hand. If input parameters needed to be changed, the redesign could take almost as much time as the original design. A design tool would automate all of the calculations involved and enable the quick and straightforward evaluation of various design alternatives.

The time spent in the design phase of a network build can be a significant cost in terms of engineering and planning hours. An optical networking design tool automates the design of the optical network and enables changes to input design parameters to be made with quick and consistent output results. The importance of a quick, efficient, and accurate design tool is integral to the overall implementation of a high bandwidth optical network.

Technical capabilities of key network elements (multiplexer/demultiplexers, EDFAs, and DCMs) must be planned for initially to enable expansion to an 80-channel DWDM system. If not, existing services could degrade when more than 40 wavelengths are required. Meanwhile, network elements placed to support a 40-wavelength DWDM system simply may not be adequate to support an 80-wavelength DWDM system. In addition, DWDM networks (multi-node ring or mesh) with greater than 40 wavelengths are significantly more complex to design and maintain. For this reason ROADMs with OCMs, tunable lasers, and a sophisticated engineering and planning tool will be extremely important if not indispensible.

Specifically, multiplexers and demultiplexers, DCMs, and optical amplifiers must be technically adequate for 80 wavelengths. ROADMs with automatic power balancing are required for rapid service provisioning and to accommodate changes in network traffic. Additionally, tunable transceivers will be required to provide the needed agility to the ROADM and the required wavelength stability while keeping inventory costs down (see Figure 3).

Designing with the end in mind will enable the network to grow economically with no danger of interrupting existing services.

JOHN SPENCER, P.E., is business and technology strategist at Optelian.