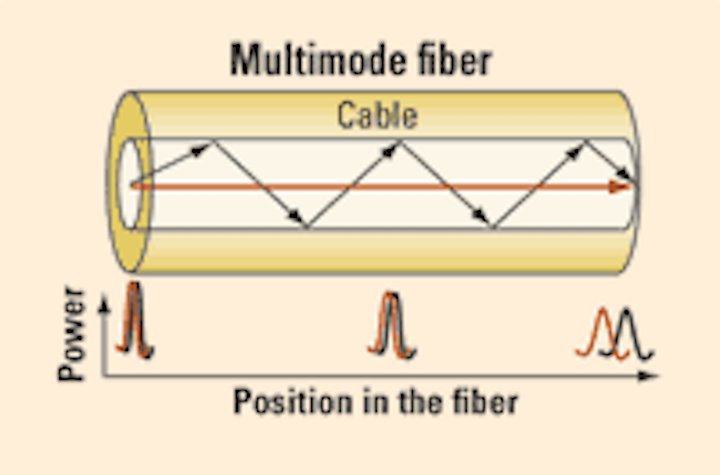 All fiber-optic cable is composed of two regions of different optical index of refraction: the core and cladding. Multimode fiber (MMF), unlike singlemode fiber (SMF), has a large core diameter that ranges from 50 to 100 μm and supports multiple modes of light. Often the multiple modes of light are viewed as different geometric rays transported the length of the fiber (see Figure 1). The ray path lengths range from the shortest path, which transits the center of the fiber (the so-called fundamental modes), to the longest paths, which can be thought to reflect internally. These longer paths are considered the higher-order modes.

Modal interference among the rays is known as differential mode delay (DMD), and its effects are exacerbated by index perturbations in the fiber. These perturbations can be induced by mechanical stresses in the field or manufacturing variation. At high data rates, the variation from fiber to fiber creates very different transport media even if the fiber is from the same manufacturer and tested to the same specification.

Figure 1. Interference among the different modes within a multimode fiber can create differential mode delay.

Premises networks are generally categorized according to three types of links: backbone, vertical riser, and horizontal interconnect (see Figure 2). The backbone of premises networks can be either SMF or MMF. The type of fiber selected for the backbone is often network-specific and depends on various factors. The backbone links are the longest lengths of MMF and present the greatest challenge for higher data rates. Installation of new fiber can be an economic challenge, so premises networks must often make do with the fiber that is available. 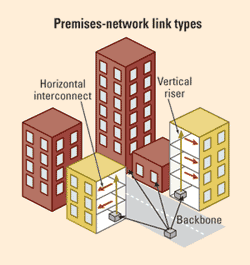 Figure 2. Long lengths of multimode fiber can be found in premises networks, particularly in the backbone and riser portions. As horizontal links evolve from copper to fiber, multimode promises to become a popular medium for this application as well.

The 10-GbE standard includes support for WANs, and that has helped push Ethernet into more networks. The spread of Ethernet has also fueled the spread of MMF into some traditional telecom strongholds-high-density points of presence (PoPs). Here, MMF may be used to enable a high-density low-cost interconnection within the PoP.