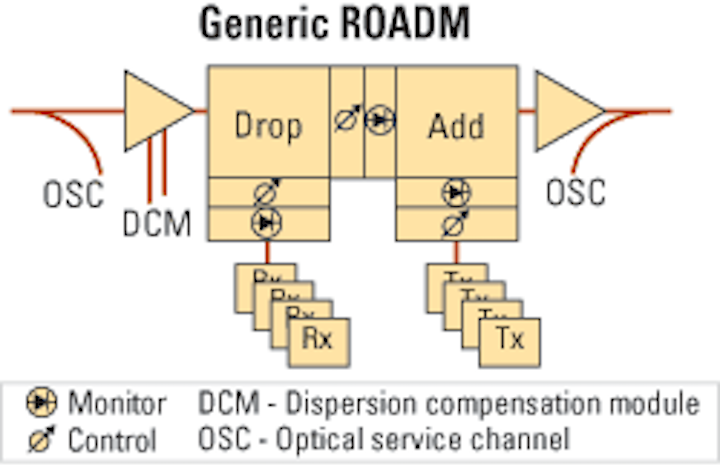 The increase in interest in this new technology comes on the heels of a severe downturn in the telecommunications industry that has limited equipment vendors’ investment in new-product development. As a result, few companies are well positioned to address to the ROADM opportunity and the others are left scrambling to rapidly and cost-effectively fill a critical hole in their product portfolio. Fortunately, options are available to meet this need.

The term “ROADM” is used to describe a network element (or “node”) capable of dynamically adding and dropping power-managed wavelength traffic through remote reconfiguration. A generic model of a ROADM node is illustrated in Figure 1. The key functional blocks constituting a ROADM node include: 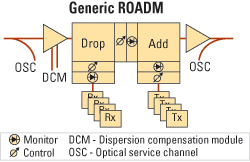 Figure 1. ROADM building blocks can vary from system to system, based on the target application. But almost all have the functional blocks shown here.

ROADM product offerings from system integrators vary based on the target application, ranging from lower-cost basic systems to highly flexible, scalable platforms. The system architecture and underlying component technologies are selected to meet specific cost and performance requirements dictated by the addressable market segment. In general, ROADM architectures focus on modular design concepts enabling efficient deployments, which deliver the required functionality at the lowest price-point, while providing a platform that will scale to meet new demands based on network expansion.

But with configurability comes complexity. The ROADM control environment is complicated by the sheer number of inter-related elements, variety of component technologies, and physical distribution of functions across the system.

A major challenge for the ROADM designer is the diversity of potential technologies that can be used, the rapid evolution of these technologies, and the market-driven requirement that the design be modular in nature to support multiple applications in a cost-effective manner. The two principle technologies for the ROADM component are based on either bulk-optic wavelength-selective switches (WSSs) or on planar lightwave circuits (PLCs) with integrated multiplexer/demultiplexer/optical switch/variable optical attenuator (VOA) and detectors.

In the case of WSS-based devices, the optical performance monitor is typically a separate device, often situated on a separate circuit pack, which is preceded by a 1×N optical switch that allows sharing across several measurement points. That requires intra-nodal communication for the control loops to function. The PLC-based devices typically have integrated per-channel power monitors, eliminating the need for the external optical power monitor. However, they only provide per-channel power visibility at a single location, again with significant impact on the optical control structure.

Given that these technologies are rapidly evolving-and the winner is far from evident-a system integrator must partition the ROADM design in a manner that enables substitution of new components with minimal redesign. Finally, the control infrastructure must be able to operate with some of the components of the ROADM removed to cost-effectively meet applications that require lower performance or capacity. All of the above argues for some level of consistency across interfaces and, wherever possible, abstraction of the lower-level functionality to present a common interface to the rest of the node.

Figure 2 illustrates the various types of embedded control intelligence that exist within a ROADM node. In this example, the ROADM design is based on WSS technology. 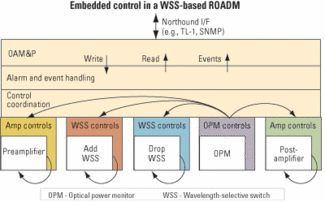 Figure 2. Embedded control involves several different control mechanisms and layers. Designers can integrate these functions themselves but with the penalties of high complexity and component cost.

As their name implies, local control loops are local to the circuit pack and/or optical component and may run on the circuit pack processor or on a processor inside the optical module, depending on the level of intelligence provided with the optical module. There are three classes of local control loops. First are controls that are localized because all stimuli needed for the loop to operate are available at the component level, for example, laser-diode current and substrate temperature control. Second are controls that are localized because the required control-loop bandwidth precludes inter-circuit pack communication such as transient suppression. Third are controls that occur at the component level but require a higher level of coordination to set targets or modify control behavior based on system state such as VOA set point and EDFA gain.

While local control is confined to a single optical component or module, the control coordination layer is responsible for tying together multiple distinct functions into a working ROADM system. The responsibilities of this layer include:

The alarm and event handling layer is responsible for event generation based on triggers set through the OAM&P. It also aggregates events from local control and control coordination functions and is responsible for de-bouncing, system corroboration, and event masking and prioritization.

The OAM&P layer provides all necessary functions to support a man-machine interface. In particular, the OAM&P layer is responsible for interpreting commands from a local craft interface or remote management system and converting those commands into one or many configuration and query operations within the ROADM node. This layer is also responsible for communicating events and alarms resulting from state changes in the system via northbound interfaces into management systems and via local craft interfaces. It also coordinates in-service upgrades of system firmware and software.

However, the reduced material cost requires considerable investment in development of control systems for a variety of technologies within the system. Scarce resources and ongoing pressure to reduce operating expenses make the business case for a new ROADM development very challenging. Equipment vendors trying to develop a ROADM product today are seldom, if ever, able to afford the luxury of this type of internal development.

To address the ROADM opportunity despite these limitations, some incumbent equipment vendors are turning to startup partners with available product to help fill the void in their product portfolios. Others are turning to their photonic-component suppliers for help in reducing development risk. Consistent with the outsourcing trend across the optical-networking industry, these equipment vendors are pushing their component suppliers to move up the value chain and carry a more substantial piece of the ROADM product development risk.

Component vendors are attempting to respond to this need by providing their customers with intelligent optical modules that include control electronics, software, and in some cases even complete line cards. Figure 3 illustrates a typical distribution of ROADM control functions based on a current view of the telecom supply chain. 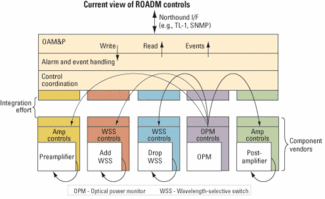 Figure 3. The use of intelligent modules and integration simplifies ROADM control. But a variety of hurdles limits the amount of intelligence many modules can supply.

In an ideal world, this move up the value chain by component suppliers would enable system vendors to rapidly and cost-effectively assemble a ROADM from highly integrated, intelligent, off-the-shelf components. For this development model to be effective, system integrators require:

In reality, the components and modules that compose ROADM are far from commoditized. Multiple technology and architecture choices encumber a just in time (JIT) product development model. Second sourcing a key component, when possible, is made difficult by the fact that smart-module vendors differ in the level of intelligence they incorporate into their products and generally do not present consistent logical interfaces into the system that needs to control them.

As highlighted in Figure 3, that leads to added effort and material costs within the local control and control coordination layers, since the system integrator must adapt controlled components or modules to the unique requirements of their control coordination layer. Similarly, the need to comply with the unique requirements of multiple-system providers effectively limits the levels of generalized value-added intelligence that component vendors can wrap around their products.

The inefficiency inherent in today’s ROADM supply-chain model stems from a lack of standardization around the lower layer of the coordination control function. If system integrators, component vendors, and contract manufacturers could agree on standard communications interfaces, configuration models, and alarm handling, modules and line cards could incorporate higher-level system hooks compatible with multiple-system-vendor requirements. Such a common control and coordination framework would allow system integrators to move much closer to their ultimate goal of JIT product development and allow them to focus more of their scarce resources on adding value through differentiation. Figure 4 illustrates this more efficient development model. 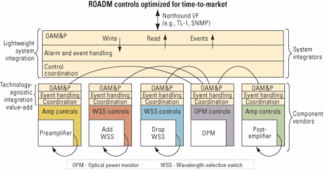 The definition of a standard control and coordination framework will play out slowly over time and certainly lag the market for the initial wave of ROADM deployments. System integrators looking at a true JIT ROADM approach today can choose to align with a single component or line-card supplier. Alternatively, system integrators can opt to work with a third-party control solutions provider to develop consistent value-added controls around components of their preferred suppliers.

In either case, system integrators can take advantage of commonality and consistency of control interfaces and behavior to push more of their ROADM functionality and development risk onto enhanced intelligent modules developed by their suppliers. Some of the value-added functionality that can migrate to such enhanced controlled modules includes:

To realize the goal of mix-and-match component selection and a modular design, it is essential to have a unified control system design. That can be achieved through the system integrator taking a more active role in the individual component development, the evolution of standards, or the use of third-party control technology. The first option requires dedication of scarce resources by the system integrator and often results in sole-source designs with elevated material costs. The second option has the potential to reduce development expenditures; however, standardization is generally a long process and not suited to a rapidly evolving market segment. System assembly using third-party control solutions is a workable option, but systems integrators will be required to specify the control interface from their component vendors.

Through standardization of a common control and coordination framework for optical-network elements or by outsourcing the design of common controls for their optical components to a third party, system integrators can address the emerging ROADM opportunity faster and with lower risk. By adopting a common control platform, system integrators enable additional functionality to be pushed onto outsourced intelligent modules or line cards without paying a penalty in the form of higher integration time and cost.

Robert Nadon is product manager and James Moser is product architect at Intelligent Photonics Control (Kanata, Ontario). They appreciate the valuable contributions to this article by Dr. Alan Solheim and Marc Nadeau.