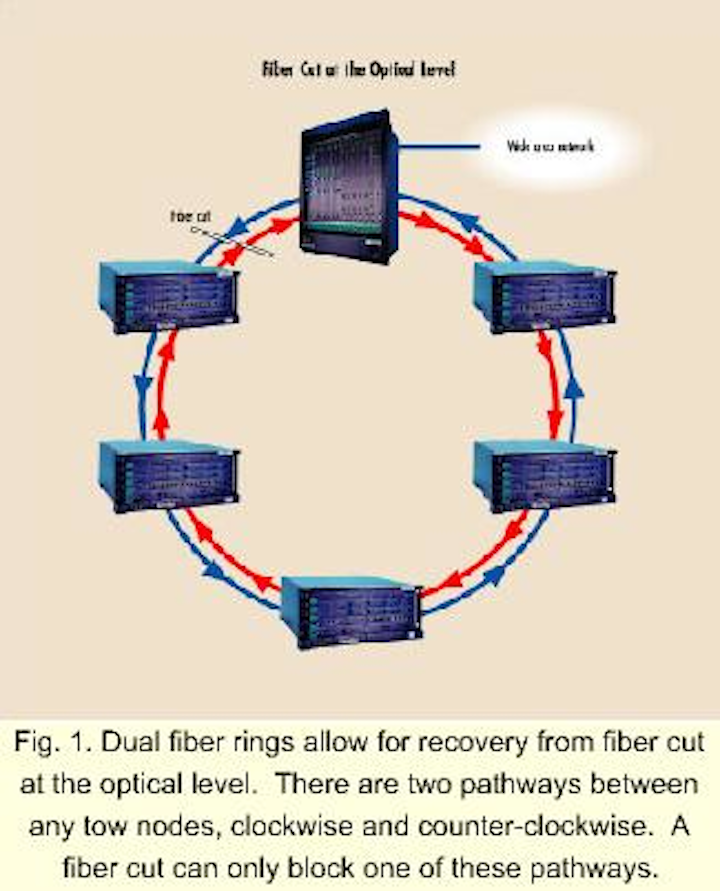 Gigabit Ethernet has already taken root as a solution to interconnect routers inside Internet service-provider data centers and other points of presence (PoPs). Yet, taking Gigabit Ethernet out onto large fiber spans such as the interconnect between separate PoPs has not become as popular. These network spans traditionally use Synchronous Optical Network/Synchronous Digital Hierarchy (sonet/sdh) for transport connectivity. Thus, native Ethernet, which is common to end users, must currently be mapped onto the legacy voice sonet/sdh hierarchy before it can be carried outside the enterprise environment. This task is accomplished through the mapping of Internet protocol traffic onto Asynchronous Transfer Mode cells or the use of packet-over-SONET interfaces. However, significant overhead and management complexity may be introduced by mapping from protocol to protocol and then undoing the encapsulation at the far end of the network.

What prevents a service provider from interconnecting routers at different PoPs with Gigabit Ethernet? Gigabit Ethernet lacks the distance, recovery, monitoring, and multiplexing features now available in sonet/sdh. But the advent of lower-cost metropolitan-area dense wavelength-division multiplexing (DWDM) systems with protocol awareness may address many of these deficiencies.

The second issue that must be addressed with wide area network (WAN) and metropolitan area network (MAN) transport is the need to quickly recover from fiber cuts. The reliability of sonet/sdh networks is such that signal integrity is restored within 50 msec of a fiber cut. This recovery is done through automatic switch protection systems that take advantage of the fact that a fiber cut cannot block both the clockwise and counterclockwise directions between any two nodes on a ring. 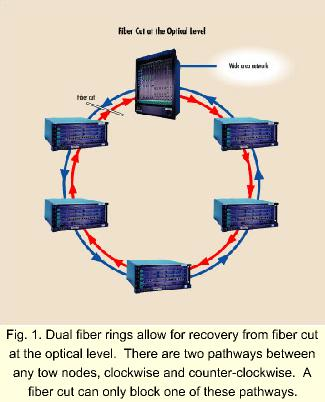 Fig. 1. Dual fiber rings allow for recovery from fiber cut at the optical level. There are two pathways between any tow nodes, clockwise and counter-clockwise. A fiber cut can only block one of these pathways.

For data networks to achieve the predictable recovery times of the public switched telephone network, either the sonet/sdh protection system must be in place or the DWDM transport system must provide this protection. To this effect, several metro DWDM vendors have implemented automatic protection switching into their DWDM terminals. These systems detect a loss of signal and re-route data to an active pathway much as sonet/sdh networks work. These systems have recovery times of less than 50 msec, thus reproducing the reliability of the more traditional transport links (see Fig. 1).

Notably, sonet/sdh networks have the ability to monitor not only the loss of signal, but also the integrity of the signal. In-band bit-error-rate (BER) monitoring is critical to maintaining a reliable system and predicting possible failures. Users must be able to set BER thresholds to activate protection switching. In this way, if there is a slow degradation in a given component or subsystem, the network manager may identify this degradation before complete failure occurs. If DWDM systems only monitor optical signal levels, as they many times do, there are no guarantees that there is signal integrity across the transport system. To address this issue, systems have now appeared that enable in-band monitoring of BER for Gigabit Ethernet signals. Such systems also enable user-defined BER thresholds to activate automatic protection switching to provide robust monitoring of signal integrity.

An example demonstrates the dilemma this tradeoff creates. A 16-channel system carrying Gigabit Ethernet on each channel effectively multiplexes to 16 Gbits/sec of data, faster than the fastest current SONET rings of OC-192 (10 Gbits/sec). For lower-speed interfaces with greater granularity, Ethernet data can be multiplexed onto Gigabit Ethernet lines through the use of classical data switching such as 10/100-Mbit/sec ports. Still, the cost-efficiency of putting a Gigabit Ethernet line per wavelength can be called into question. After all, it is well known that the current economic sweet spot for DWDM is at 2.5-Gbit/sec clock rates. Why clock lasers at the Gigabit Ethernet rate of 1.25 Gbits/sec, when it's possible to use OC-48 framing and get nearly double the data rate?

Newly announced systems address this issue by using 2.5-Gbit/sec Ethernet framing as the transport mechanism on the DWDM lasers. This technique allows 20 10/100-Mbit/sec interfaces or two Gigabit Ethernet lines to be transported on a single wavelength. Half as many wavelengths are required to transport a given number of Gigabit Ethernet signals in contrast to traditional DWDM systems carrying Gigabit Ethernet. 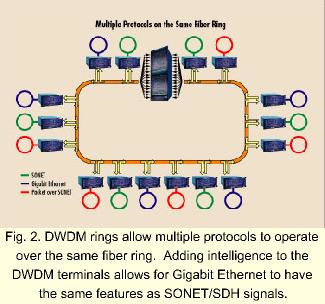 Fig. 2. DWDM rings allow multiple protocols to operate over the same fiber ring. Adding intelligence to the DWDM terminals allows for Gigabit Ethernet to have the same features as SONET/SDH signals.

Fortunately, DWDM systems can allow for a natural transition from legacy sonet/sdh circuit-switched networks to convergent networks. Traditional voice and other sonet/sdh services can occupy a given number of wavelengths, with future wavelengths added to new convergent data links. An economical native data interface such as Gigabit Ethernet can now extend beyond the PoP and LAN backbones to inter-PoP connectivity (see Fig. 2).

The vision of a flatter network through the elimination of layers upon layers of protocol conversions can be realized with intelligent data-optimized DWDM systems. Gigabit Ethernet into the MAN may be the first test of that vision.