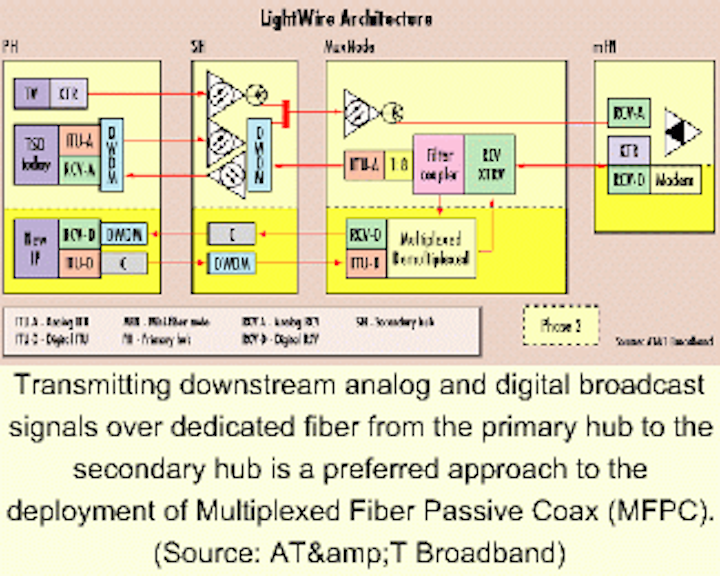 As the AT&T marketing team focuses on branding and other issues, the technical team from AT&T Labs and AT&T BIS is busy crafting a common vision of future-ready broadband networks. This vision will become clearer, thanks to trials conducted this summer by AT&T of a new architecture called LightWire. 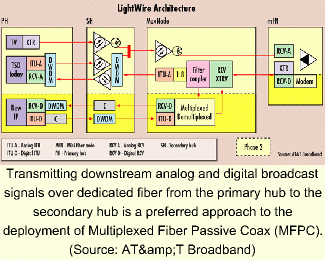 Transmitting downstream analog and digital broadcast signals over dedicated fiber from the primary hub to the secondary hub is a preferred approach to the deployment of Multiplexed Fiber Passive Coax (MFPC). (Source: AT&T Broadband)

Central to the LightWire architecture is a blending of key network design elements promoted by the two merged companies. From AT&T comes the concept of the mini-fiber-node (mFN) overlay, and from AT&T BIS comes a strong emphasis on multiplexing, especially in the optical domain. These, together with other technologies and techniques for combining them, mark LightWire as one of the more unique approaches that have emerged to address the need for future-ready HFC networks.

Neither the mFN overlay nor dense wavelength-division multiplexing (DWDM) approaches have been widely embraced by the rest of the U.S. cable industry to date. However, AT&T expects this combination to allow cost-effective deployment of mFNs with serving areas averaging 50 to 60 homes versus the 1200 homes per fiber node typical of TCI's prior HFC architecture. This deployment can be done, AT&T believes, at capital costs no more than $40 per home (roughly 20%) above the cost of AT&T BIS's earlier architecture. An important element in achieving this cost target is the ability to keep fiber costs in line through the use of DWDM and other technologies.

Among the strategic benefits of this deeper fiber penetration is a dramatic expansion of the effective bandwidth available on a per-home basis. LightWire also promises operational cost savings.

According to a technical paper presented by Xiaolin Lu at this year's NCTA convention, AT&T projects a 21% improvement in reliability and annual operation savings, including reduction in customer calls, etc., of up to $11 per household. Oleh Sniezko, vice president of engineering at AT&T Broadband, also points to DWDM-enabled capital cost savings tied to more centralized deployment of host digital terminals (HDTs) that support telephony.

AT&T also expects reductions in powering costs. Based on initial models, the company expects a 60% reduction in active components and a 50% reduction in power requirements relative to designs based on AT&T BIS's more traditional approach to HFC. For example, in Salt Lake City-where AT&T is also running a test of centralized powering-each LightWire is replacing an average of four actives devices.

According to the AT&T technical paper delivered at NCTA, one preferred approach to deploying LightWire is to transmit downstream analog and digital broadcast signals over dedicated fiber from the primary hub to the secondary hub (see Figure). Narrowcast and switched signals such as telephony and DOCSIS-based high-speed data would be DWDM multiplexed at the primary hub and transmitted over another fiber to the secondary hub. After DWDM demultiplexing, all these signals would be optically combined (using different radio-frequency bands) and transmitted to the MuxNode via fiber. At the MuxNode (or at the secondary hub), the combined downstream signals could be optically amplified and distributed to multiple mFNs via fiber. At the mFN, optical signals are converted to RF, amplified with high-output capacity hybrid components, and distributed to homes via passive coaxial distribution lines containing no active RF devices.

TCI began deploying downstream and upstream DWDM in mid-1998 in its network upgrades. More recently, the company has been looking at adding frequency stacking and upstream baseband digital systems to the mix. According to Sniezko, Scientific-Atlanta's new baseband digital products-which support both hub-to-headend and node-to-hub applications-were approved for use in AT&T Broadband's networks this summer. He expects AT&T to widely deploy the technology in the future.

AT&T was slated to evaluate the results of the Salt Lake City field trial in August. If the results are in line with the company's modeling, Sniezko says, approximately half of the AT&T plant to be upgraded next year will incorporate the LightWire architecture.

Sniezko says LightWire can be used in systems that have already begun deploying more-traditional HFC architectures. It can be phased into existing upgrade projects at the secondary hub level, he explains, and possibly even on a node-by-node basis. For a plant that already has been upgraded with a more-traditional HFC architecture, current plans are to wait until capacity needs justify a move to LightWire. The major issue in this decision is not cost, says Sniezko, but the service disruption that would associated with such an upgrade.

Some in the industry question whether AT&T can hit its cost and performance targets for LightWire, which they say will rely on "nonstandard" products that will not reach volume levels comparable to devices used in more-traditional HFC architectures. Sniezko and Lu expressed confidence about LightWire equipment costs noting that virtually all the components used in the MuxNode and mFN are standard high-volume devices. They say vendors are already quoting prices for mFNs comparable to standard nodes: MuxNodes at current unit prices of $6000 to $10,000, cost only $5 to $10 per home passed and MuxNode com ponents will fit into existing housings used for "scalable" nodes today. Heat is not a problem, they explain, since MuxNodes use less power than current node configurations.

Hitting high-volume production thresholds should also not be a problem, they say, since the much smaller fiber serving areas will demand roughly 10 times as many nodes as would be used with 1,200-home serving areas. Putting optical receivers in the MuxNode should lead to upstream receiver volumes 10 times those used in architectures relying on centralized rack-mounted units. The LightWire architecture is expected to use roughly four times as many optical amplifiers as needed in AT&T BIS's earlier architecture, though these will be lower-power devices.

Harder to control than the cost of equipment, says Sniezko, are labor costs (including fiber splicing), which he says will be carefully scrutinized in the Salt Lake City trial.

Architectures that take fiber deeper have compelling operational and strategic advantages at price premiums that continue to decline. AT&T's LightWire stands as one of the more innovative approaches being explored in the quest for cost-effective, reliable, and scalable networks to support business models increasingly focused on interactive, on-demand, and high-bit-rate services.

Don Gall has been involved with the cable-TV industry for the last 28 years. He was an integral part of the team at Time Warner that developed the first practical applications of analog fiber and hfc networks. He is currently a consultant with Pangrac & Associates (Port Aransas, TX) and can be reached at dongall@pangrac.com>

Mitch Shapiro has been tracking and analyzing the broadband industry for more than 12 years. He is currently a consultant with Pangrac & Associates, which this summer will publish the first of a series of in-depth reports on clustering, network upgrades, and new service strategies in the cable industry. He can be reached at mshapiro@pangrac.com or via the P&A Web site at http://broadbandfuture.com.