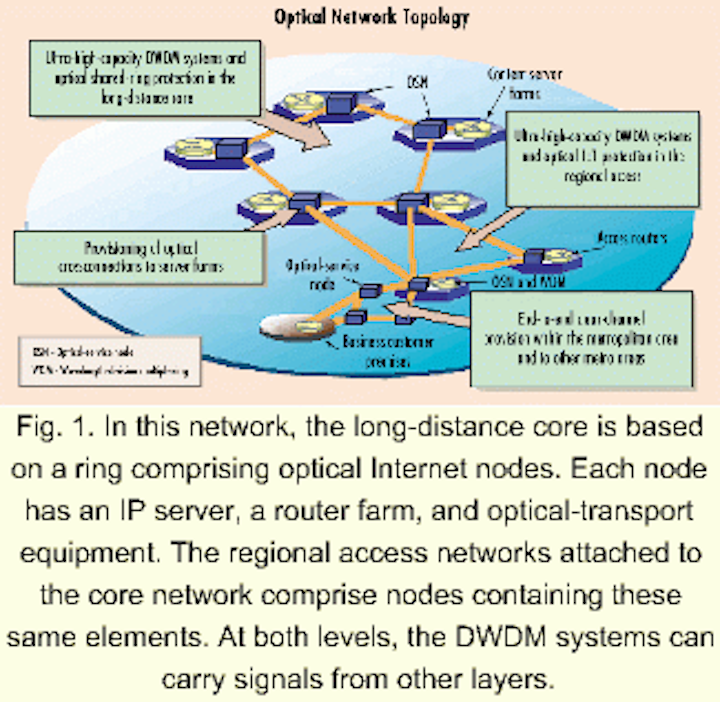 Optical-network architectures will increase the availability and economy of next-generation networks. Combined with dense wavelength-division multiplexing (DWDM), which enables the simultaneous transmission of numerous optical channels over a single fiber regardless of protocol, optical technology will enable carriers to provision and manage ultra-high capacity networks. The relative simplicity of optical components will make these systems more reliable and economical than their electronic counterparts.

In backbone infrastructures, increased fiber capacity together with the use of the highest available bandwidth per channel will lower the transport cost-per-bit. In metropolitan networks, transparent interfaces will permit the transmission of data formats such as Gigabit Ethernet, Internet protocol (IP), and Asynchronous Transfer Mode (ATM) over the optical layer. All of these advances will create business opportunities for carriers and their customers.

Immense traffic volumes will travel across next-generation network backbones. These networks will be able to support this ultra-high capacity because of major gains in bit rates and in the number of wavelength channels carried on a single fiber. Some DWDM systems deliver 10 Gbits/sec on 32 channels on a single fiber today. Terabit scale service is not far off. In the Siemens laboratory, a record 3.2 Tbits/sec (40 Gbits/sec over 80 channels) was transmitted over a single 40-km optical fiber without error (see www.icn.siemens.com/icn/news/1999/99092704.html). This bit rate is equivalent to 50 million simultaneous conversations or 100 million typed pages per second.

New levels of crossconnect granularity will be introduced to route this high-capacity wavelength traffic. The megabit granularity levels used for routing SONET/SDH traffic will be superseded by switching at 2.5, 10, and 40 Gbits/sec. To maximize bandwidth-per-wavelength in the core network, aggregation will be achieved by multiplexing lower data rates (e.g., 4x2.5 Gbits/sec to 10 Gbits/sec). This economy will also occur in access networks, where multiservice consolidation will result in aggregation such as 4x622 Mbits/sec to 2.5 Gbits/sec. Thousands, or even millions, of smaller channels could be aggregated into optical channels for transport across the backbone and then demultiplexed at the other end.

A new class of network-management system will allow the flexible interconnection of optical data streams throughout the network. These systems will provide carriers with seamless network management, integrating optical IP and SONET/SDH signals across national, regional, and metropolitan networks. Network operators and service providers will have greater flexibility in provisioning network resources--the ability to match the pipe size with the signal type and bandwidth requirements.

Many network-management systems will support the common object request broker architecture (CORBA), an open interface protocol that allows multivendor networks to be managed from one central point. This new standard will enable rapid and cost-effective provisioning of services. It also supports key management functions such as the ability to monitor end-to-end connections and isolate faults. Suppliers such as Nortel Networks, Fujitsu, Lucent Technologies, Siemens, and others have agreed to support CORBA. With widespread industry support for the protocol, network operators will be able to choose best-of-breed transport equipment and telecommunication management network (TMN) systems. 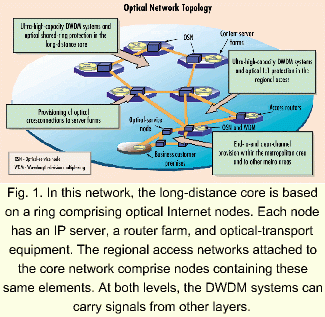 Fig. 1. In this network, the long-distance core is based on a ring comprising optical Internet nodes. Each node has an IP server, a router farm, and optical-transport equipment. The regional access networks attached to the core network comprise nodes containing these same elements. At both levels, the DWDM systems can carry signals from other layers.

A sample topology of the key features of an optical network that is part of the national Internet infrastructure is shown in Figure 1. In this example, the long-distance core network is based on a ring composed of optical Internet nodes. Each node includes an IP server and router farm as well as transport equipment. The regional access networks attached to the core network are composed of nodes containing these same basic elements. At both levels, the DWDM systems can carry all types of signals, like those originating from ATM switches or Layer 2 and Layer 3 switches.

To meet the exploding demand for IP bandwidth, optical networks will increasingly adopt a highly efficient transmission technique called IP-optimized networking. This transmission method uses a lean IP packet-switching network on top of an ultra-high-capacity transport network. Each technology is selectively used to best serve traffic requirements. The idea is to place routers only where actually needed, using transport network elements to provide the coarse granularity needed for routing the high-volume traffic. That allows network elements to be combined for maximum bandwidth at lowest cost.

The reasoning behind this approach is that it reduces network costs, because router-only IP networks are more expensive than hybrid networks using IP routing above an underlying transport layer. The higher cost of router-only networks is due to the nature of packet switching, which is at the core of IP networking. When the data stream enters a router, each packet is examined to determine its destination and the best path to get it there. Routers process millions of packets per second in this fashion. Since the minimum size of a packet is about 48 bytes, routers have to perform a lot of intensive bit-crunching.

Fig. 2. Since optical transport devices do not have to examine individual packets, the network architecture is less complex--and cheaper--than an infrastructure using routers with comparable throughput.

In contrast, the transport network merely performs a coarse crossconnection of the data stream. Since transport network devices do not have to examine individual packets, the architecture is less complex--and less costly--than routers with comparable throughput (see Fig. 2). Because of their inherent simplicity, transport network components will remain ahead of routers in terms of line speed, switching capacity, and price/performance as optical technology evolves.

Optical networks will incorporate SONET/SDH management functions such as error detection (link supervision and fault reporting), fast protection switching (switchover to a standby path in the event of line interruption), and bandwidth monitoring and accounting (billing for bandwidth used). Although implemented on the optical layer, these functions will remain compatible with SONET/SDH technology, which will ease the introduction of new services and facilitate the integration of WDM, ATM, SONET/SDH, and Plesiochronous Digital Hierarchy (PDH) onto one network.

The high data rates and multiple services carried by the next-generation transport network will be protected directly in the optical layer. Optical-protection switching will provide protection against faults such as network fiber cuts. This key function is essential for satisfying service-level agreements between carriers and their customers in the emerging optical network.

Dual paths will provide protection within the network. Not only is the ring protected, but also the link to the end user, which is the area where fiber is most vulnerable to damage by excavation. Fast protection switching on the optical layer will ensure that even time-critical applications such as voice-over-IP (VoIP) are not interrupted by fiber breaks or other network problems.

With the emergence of optical networks, new protection schemes will develop to make the most efficient use of backup lines. One option is 1:1 protection, which allows 100% of the network capacity to be used, by prioritizing traffic according to class of service. With 50% of the network reserved for high-priority, business-class traffic, the remaining 50% is used both for lower-priority traffic and to offer protection to the high-priority traffic in the event of a failure.

While 1:1 protection results in 100% line utilization, the drawback is that the low-priority service is a hard sell because it is the first traffic disconnected when a problem occurs. Another shared protection scheme involves two working lines sharing a single protection line.

The throughput of optical networks will increase with the availability of photonic switching--a technique that uses photons (particles of light) to transmit, store, and manipulate information. The concept is extremely attractive because, unlike electrons, photons have no mass, allowing much faster switching than is currently possible with the electrical components used in today's telecommunication networks. Various transmission methods are being explored, including the use of micromirrors and new types of refractive material within fiber cables. Price and performance issues are still being worked out, but it's only a matter of time before technology now in the laboratory comes to market.

By transmitting data as waves of light, photonic technology will allow switching and transport on a scale that is difficult to grasp. Rather than using electrical devices to examine the data en route and determine where it needs to go, optical add/drop devices will strip off the correct color wavelengths at their destination-blue for one city, green for another. As networks become faster, it will become easier to treat data as a "single flow" rather than bit-by-bit.

Advances in optical technology are not taking place in a vacuum. Parallel breakthroughs are occuring in areas such as IP and wireless. All these developments serve as a prelude to a universal Internet, where communications such as voice, data, and multimedia rapidly traverse the same pipes. The universal Internet will support all types of communications media--standard telephones, personal and office computers, and a new generation of mobile devices.

Industry initiatives are already underway to develop open architectures that will support all major protocols and standards. The result: Everyone will be able to participate regardless of location or technology platform. As the next major communications milestone, the converged Internet will offer new opportunities for carriers and service providers, while for end users, it will mean access to a world of information without restrictions.