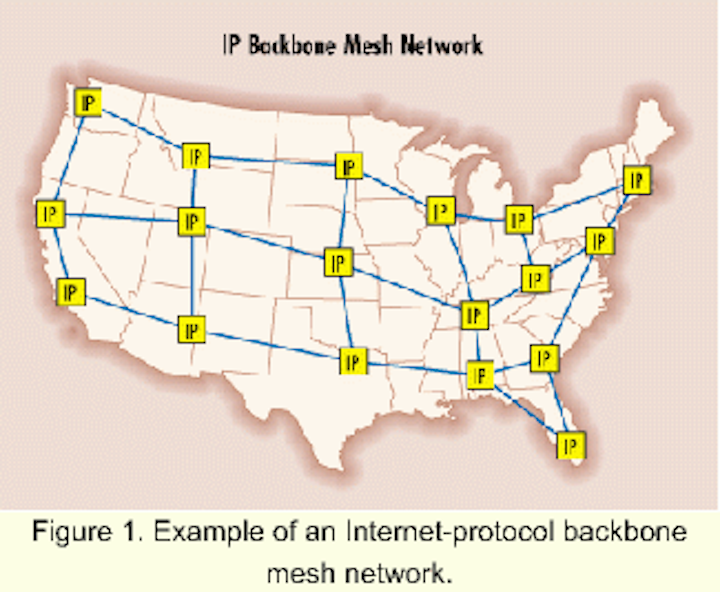 The all-optical component of the mesh architecture is essential to providing the economy and scalability for continued network growth.

The explosive growth of data traffic, fueled mostly by the increasing popularity of the Internet, is stressing both the transport and the processing capabilities of today's backbone networks. The transport demand is being adequately addressed, at least from a capacity standpoint, by deploying dense wavelength-division multiplexing (DWDM) point-to-point systems, which are enabling a transmission capacity of tens or even hundreds of Gbits/sec per fiber. However, the soaring processing demands at network nodes, e.g., in Internet-protocol (IP) routers and electronic switches, continue to present a significant challenge in terms of scalability and cost. Furthermore, the capital and operating expenses of conventional point-to-point WDM systems are quite high, mainly due to the required large number of regenerators at and between the nodes of a national-scale network. 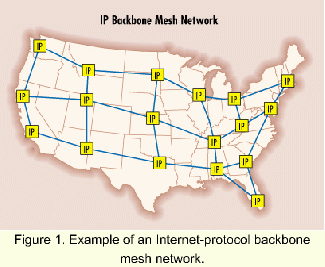 In contrast to these conventional solutions, an all-optical mesh network is a considerably more economical and scalable networking solution well suited to serve as the backbone for the next-generation Internet. A mesh architecture complements the dynamic, distance-independent, multipoint-to-multipoint nature of Internet traffic. The mesh can be organized into many logical architectures, permitting flexible configurations that can support various traffic and protection requirements across large networks. Multiple routes exist between network points, so traffic can be easily re-routed to an alternate path in the event of a fault or fiber cut. 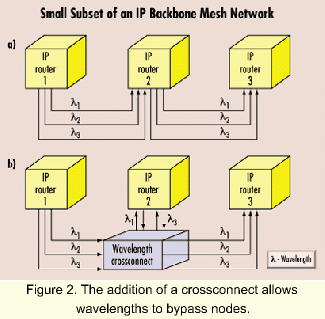 Figure 2. The addition of a crossconnect allows wavelengths to bypass nodes.

Point-to-point mesh architectures, while providing network flexibility, do not address the potential processing bottlenecks and high cost resulting from the large amount of required electronics. The all-optical component of the architecture is essential to providing the economy and scalability for continued network growth. To achieve all-optical domains with large extent, both ultra-long-reach, high-capacity transport and multiterabit all-optical switching technologies are required. The combination of such optical transport and switching technologies not only eliminates the need for huge electronic routers and switches as well as all, or most, of the electronic regeneration required in the network, but also enables rapid provisioning and simplified operations.

Bandwidth on de mand and Multi pro tocol Lambda Switch ing, two visions that are becoming reality as the standards bodies progress in this direction, will greatly benefit from the ability to dynamically provision bandwidth, with very little over-provisioning required compared to electronic solutions. Furthermore, a configurable optical crossconnect can enhance the restoration capabilities achievable with a mesh architecture.

All-optical mesh networks are especially effective when deployed as part of a multilayered, or hierarchical, architecture. The all-optical mesh is ideally suited for core backbone networking, analogous to an express highway. In contrast to the traffic aggregation and local traffic routing that occurs at the higher layers of the network, the express optical mesh backbone routes large bundles of traffic over long distances. The ability to travel all-optically for long distances is ultimately what reduces cost and eliminates the electronic processing bottlenecks, enabling cost-effective, scalable growth to keep pace with future traffic demands.

While all-optical-networking technology is expedient for a variety of data services, IP networks are especially in a position to take advantage of such technology. High-capacity IP routers are emerging with OC-48 and ultimately OC-192 interfaces. With such traffic granularities, the IP layer can be placed directly over the optical layer, obviating the need for expensive intermediate SONET and/or ATM layers, which traditionally are used to multiplex, groom, and manage finer-granularity traffic. Given IP routers with OC-48 or OC-192 ports, it is tempting to architect the backbone IP network by interconnecting neighboring routers directly with point-to-point WDM transmission systems. 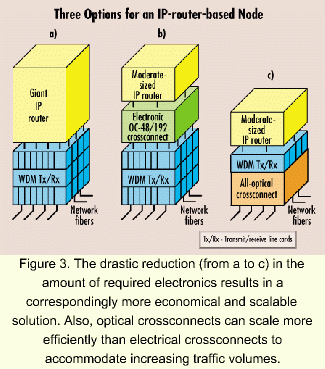 Figure 3. The drastic reduction (from a to c) in the amount of required electronics results in a correspondingly more economical and scalable solution. Also, optical crossconnects can scale more efficiently than electrical crossconnects to accommodate increasing traffic volumes.

Such a point-to-point architecture results in the nodal architecture represented by Figure 3a. The IP node is equipped with a huge IP router and a large number of electronic WDM transmit/receive line cards. The huge IP router is needed because in addition to the local traffic, the router must handle the through traffic, which is much larger than the local traffic in backbone networks.

This approach suggests the need for deploying optical-layer bypass technology (e.g., a crossconnect or an add/drop multiplexer) to allow the through traffic to bypass the IP router, appreciably reducing the required router size. For example, by introducing a wavelength-level crossconnect, as shown in Figure 2b, the wavelengths are delivered exactly where they are needed. In this example, l2 bypasses router 2 and is transported directly to its destination, router 3. 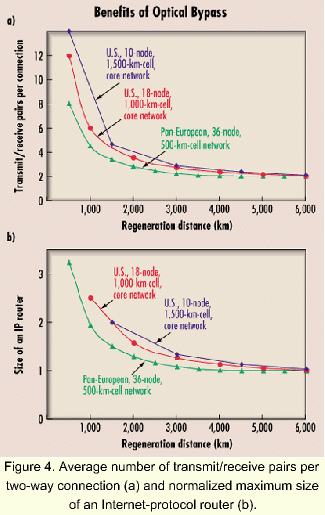 Figure 4. Average number of transmit/receive pairs per two-way connection (a) and normalized maximum size of an Internet-protocol router (b).

While the crossconnect functionality can be provided by either electronics or optics, the optical domain provides several advantages. Figure 3b depicts the case where an electronic OC-48 or OC-192 crossconnect is deployed at the node. Note that in this case, while the required IP router size is reduced compared to the case shown in Figure 3a, the same large number of electronic WDM transmit/receive line cards is still needed, which is costly. Also, as IP traffic volumes continue to soar, the electronic crossconnect may be unable to scale in size. Alternatively, if an all-optical crossconnect is deployed, as shown in Figure 3c, there would be no need to use WDM transmit/receive line cards for the through traffic. The drastic reduction in the amount of required electronics results in a correspondingly more economical and scalable solution. Furthermore, optical crossconnects can scale more efficiently than electrical crossconnects to accommodate increasing traffic volumes.

To enable all-optical networking in backbone networks, the following are essential: (1) an ultra-long-reach, all-optical, high-capacity transport technology capable of regeneration-free transmission over several thousand kilometers of conventional fiber and amplifier spacings, and (2) a cost-effective, multiterabit, all-optical crossconnect or add/drop multiplexer. The optical reach clearly needs to be much larger than the average internodal distance for the signal to optically bypass one or more intermediate nodes without regeneration. Elimination or at least drastic reduction of regeneration in the network results in large savings in the capital and operating expenses of the network. When that is coupled with the remote configurability of the optical crossconnect, the result is very rapid provisioning of services over the network as well as fast restoration.

The benefits of optical bypass can be quantified in terms of the reduction of the number of transmit/receive cards and the reduction of IP router size, as a function of the optical reach in the network. Figure 4 plots the relevant statistics for two realistic U.S.-scale networks (with 1,000-km and 1,500-km average nodal spacing) and one pan-European-sized network (with 500-km average nodal spacing), assuming statistically uniform traffic. Note that an optical reach of at least two or three times the internodal distance is needed to yield appreciable savings, thereby requiring that switching be performed all-optically to take full advantage of the long reach. 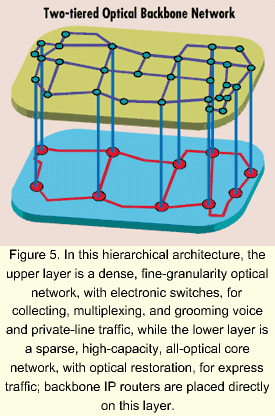 Figure 5. In this hierarchical architecture, the upper layer is a dense, fine-granularity optical network, with electronic switches, for collecting, multiplexing, and grooming voice and private-line traffic, while the lower layer is a sparse, high-capacity, all-optical core network, with optical restoration, for express traffic; backbone IP routers are placed directly on this layer.

An effective way to deploy optical mesh backbone networks in conjunction with existing networks is to use a hierarchical, or two-tiered, architecture such as that shown in Figure 5, where the all-optical network acts as the high-speed core layer for express traffic. The capacity of many existing networks is currently being exhausted by the tremendous growth in traffic; that is especially problematic in legacy SONET rings where capacity exhaust is exacerbated by the inefficiencies of inter-ring routing. These existing electronics-based networks can be more effectively utilized by migrating their express traffic to the new optical mesh network and using their freed resources for collecting, multiplexing, and grooming the growing voice and private-line traffic. The express mesh layer would carry the aggregated traffic delivered by the electronics-based networks, in addition to directly carrying the fast-growing IP traffic. The new express layer would also provide efficient, cost-effective hierarchical optical restoration, which would greatly increase the reliability and availability of the combined network. 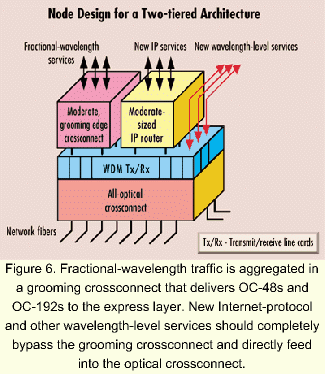 In addition to providing a more efficient and cost-effective network, the two-tiered architecture will result in less complex network management. The all-optical express mesh network can be used to rapidly provision cross-country connections, which is a much simpler process compared to provisioning such connections over conventional single-layer electronic-based architectures. Furthermore, the optical layer adds more options for restoration, allowing carriers to have more flexibility in choosing which options to deploy. The hierarchical approach is also very amenable to supporting multivendor systems. The electronics-based layer of the network can comprise systems from a number of vendors, with the optical mesh backbone serving as the express highway between them. Common network management of, and signaling across, the layers is currently being addressed by standards bodies.

All-optical mesh networks are essential for providing the economy and scalability necessary for continued dramatic network growth. An all-optical system that takes advantage of both ultra-long-reach transport and all-optical switching significantly reduces the amount of electronics in the system, thereby alleviating the processing bottleneck at nodes, driving cost out of the system, and expediting the provisioning process. The advantages of the all-optical technology are more fully realized when deployed in a mesh topology that provides efficient routing and flexible restoration options.

In addition, all-optical mesh networks can enhance existing networks by allowing them to migrate large bundles of traffic onto the express core backbone. All-optical systems are readily adaptable to higher capacities, ensuring that all-optical solutions will continue to gracefully scale in the future.

Adel A. M. Saleh is the chief network architect at Corvis Corp., and Jane M. Simmons is a senior member of the Corvis Network Architecture Group.