Recent changes to the ITU’s G.657 specification facilitate the use of bend-insensitive fiber in access networks. Such fiber enables technicians to use legacy copper installation methods in MDU environments without incurring excessive loss. 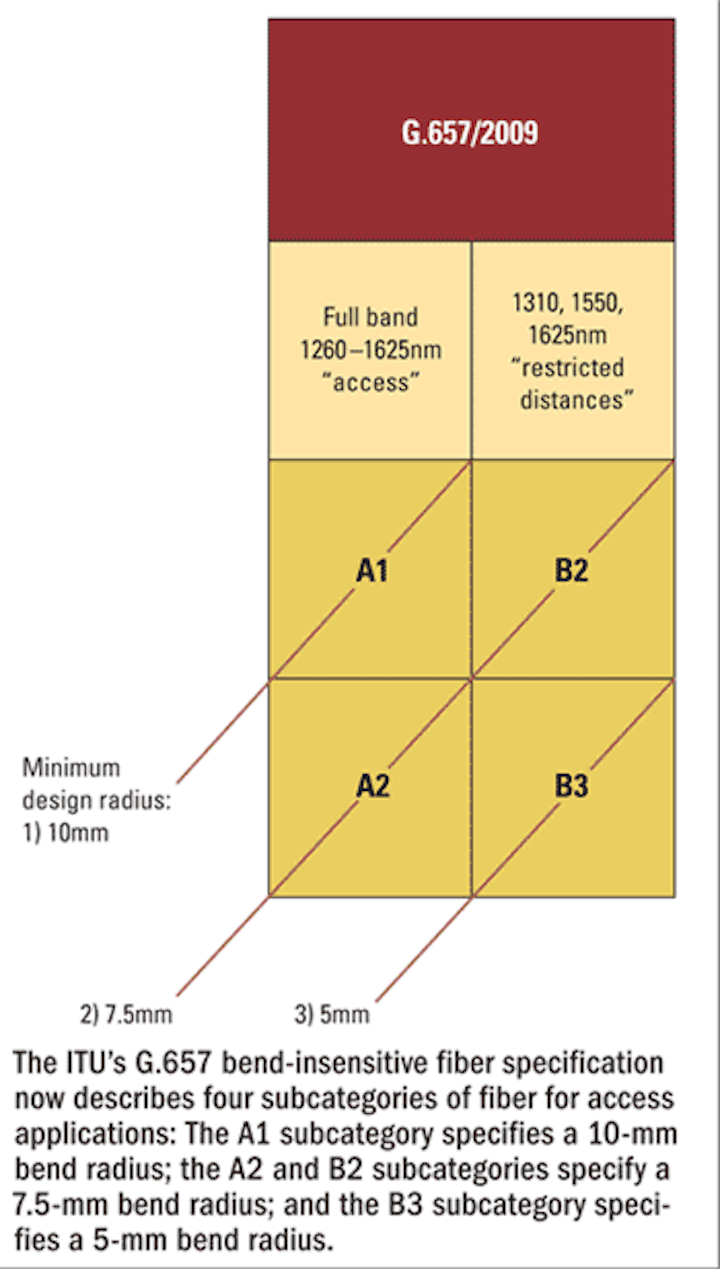 Recent changes to the ITU’s G.657 specification facilitate the use of bend-insensitive fiber in access networks. Such fiber enables technicians to use legacy copper installation methods in MDU environments without incurring excessive loss.

In October 2009, the ITU-T revised and expanded its existing G.657 specification for bend-insensitive fiber to facilitate its use in the access market. The standards body recognized that improving the bending performance of optical fiber ultimately will result in easier and lower cost in-home and in-building installation.

The additions to the 2009 version include two subcategories known as G.657.A2 and G.657.B3. The latter has captured the lion’s share of attention, likely because it was driven, and subsequently adopted, by Verizon.

The need for new fiber type

For carriers like Verizon, it is imperative that technicians are able to deploy fiber quickly and easily using strategies similar to legacy copper installation, which saves time and money. As a result, optical fiber cables are now subject to tight bends around corners, some as tight as 90 degrees. They are often tucked behind or under moldings and even stapled in place. While these practices drive down the cost of installation, they exact a toll on standard fiber.

“If you took x-rays of what happens to fibers under these situations, you find that the bends get smaller than 7.5 mm, down to more like the 5-mm radius range,” explains David Mazzarese, global manager of optical fiber technical marketing at OFS (www.ofsoptics.com).

In fact, this is exactly what Verizon and others determined when they installed 7.5-mm bend radius G.657.B subcategory fiber using the fast-and-easy copper installation paradigm; such fiber exhibited excessive loss under these conditions, particularly when stapled. The ITU decided that a new category of fiber was needed, and the G.657.B3 subcategory ensued.

“This new category of fiber is fundamental in driving down the cost of MDU applications,” says Mazzarese.

Verizon has chosen OFS’s 5-mm bend radius EZ-Bend MDU drop cables for use in the FiOS network. Mazzarese confirms that the carrier is deploying two different cables, a 4.8 mm and a 3 mm, both of which are typically connectorized at both ends for plug-and-play installation. While Corning Cable Systems (www.corning.com/cablesystems) is a bit coy about discussing its customers, Verizon also is understood to be deploying the cabling company’s ClearCurve G.657.B3-compliant product. 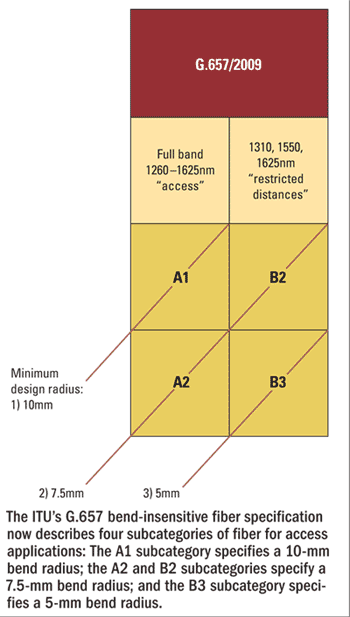 While the MDU application is the initial driver for 5-mm bend radius fiber, OFS’s John George, director of systems and applications engineering, is quick to note that such fiber is also useful within single-family homes, particularly given the recent emergence of indoor ONTs.

“Any application where a low-count fiber is run inside a building, this will have value,” he says. “We’re seeing fiber to the business, fiber to multi-tenant unit strip malls, and so forth where the same desire of the service provider exists for [a] low-cost, easy-to-install, no-concern-about- bending-loss [fiber].”

But not everyone is convinced that a bare fiber 5-mm bend radius is necessary, even under such extreme conditions as stapling. “To say that the bare fiber inside of the cable has to meet a certain bend radius in order to meet a stapling application never made any sense to us,” admits Ryan Chappell, North American fiber business manager at Draka Communications (www.draka.com). “You’re not stapling bare fiber; you’re stapling cable.”

The folks at Draka Communications argue that specifications should be placed on the cable, not the fiber. They maintain that the B2 subcategory fiber performs perfectly well when deployed using the quick-and-easy installation paradigm, as long as it’s housed in the right cable. But, as Chappell notes, “We lost that argument.”

Chappell and his colleagues believe the more important addition to the G.657 specification can be found in the A2 subcategory. The original G.657.B subcategory specified a 7.5-mm radius fiber, but it did not require backwards compatibility, nor did it mention potential use in the access network. Despite the absence of a standard, many customers have bought and continue to buy G.657.B fiber for deployment in the outside plant—“in massive quantities, in fact,” Chappell reports. “We had customers begging us, in the re-write of G.657, to put something in that would allow them to use the higher class of bend-insensitive fibers in the outside plant.”

With the addition of the A2 subcategory, network operators can now use the better performing 7.5-mm bend radius fiber in ordinary outside plant cables to achieve smaller enclosures, smaller pedestals, more condensed fiber storage, etc.

Moreover, adds Chappell, having one international standard is less confusing. “In the past, you had to specify that you wanted a fiber that was G.657.A and B compliant and G.652.D compliant; it was a mouthful.”

Still work to be done

While the expansions and additions to the ITU-T’s G.657 specification enable carriers to deploy standardized bend-insensitive fiber in their access and outside plant networks, there is still work to be done. All sources interviewed for this story agree that 5-mm bend radius fiber is robust and reliable enough for deployment in carrier networks, but some believe additional study will be needed to ensure the reliability of this fiber over the expected 20-year lifetime.

“It doesn’t start to be too much of an issue until you get below about 5-mm,” explains Chappell. “You’re going from an order of magnitude of one failure out of a billion, maybe, at 7.5-mm radius to one failure out of 100 to 200 million at 5-mm. So it’s still tremendously good
reliability. But when you go below 5 [mm], the curve starts to get really steep, and you see that the projected
time to failure gets shorter and shorter below 5 mm.”

Draka Communications has adopted a new method for testing its fiber; it increases the typical proof-test strength from 100 kpsi (100,000 lbs of pressure per square inch) to 200 kpsi to weed out weak spots in fiber stored at low bend radii. Chappell says this plan was discussed during ITU meetings but was rejected. Draka has decided to adopt this practice anyway. Sumitomo Electric Industries (http://global-sei.com) has adopted a similar strength test for its PureAccess-R5 “better than B3” bend-insensitive singlemode fiber as well.

“It is new territory,” admits OFS’s George. “As we get down to 5[-mm] and putting the cable in tension around corners, this is a new reliability regime that hasn’t been well studied. More standards work is needed.”

More standards work is on the ITU’s agenda. At the next meeting, members will discuss adding another subcategory, G.657.A3. The subcategory would include 5-mm bend radius fibers that are backward compatible with the G.652.D specification, reports Peter Pondillo, manager of standards engineering at Corning. “The mode-field diameter, if it’s not backward compatible, could potentially add loss at the connectors.” For this reason, the ITU-T will explore the possibility of a backward-compatible 5-mm bend radius A3 subcategory.

Ask the fiber manufacturers why singlemode bend-insensitive fiber makes sense for the access network, and they will tell you such fiber can be bent around corners as tight as 90 degrees and even stapled. Ideal for use in challenging environments, bend-insensitive fibers enable technicians to use tried-and-true legacy copper installation techniques, thereby lowering the cost of fiber installation. Thanks to the recent advent of bend-insensitive multimode fiber, these same benefits will more likely be seen in enterprise network applications, where space is at a premium and moves, adds, and changes are frequent.

“We say, ‘There is no typical [data center] installation,’” says Corning spokesperson Monica Sofio. “You can have tight bends, you can have cable caught in doors, and you can have rough handling. It’s a challenging environment, especially as the amount of traffic continues to grow, and [data centers] get more condensed.”

These new offerings also provide all the benefits of high speed/high bandwidth in a bend-insensitive fiber; all brands meet or exceed the OM3/OM4 industry standard for laser-optimized multimode fibers, say the manufacturers.