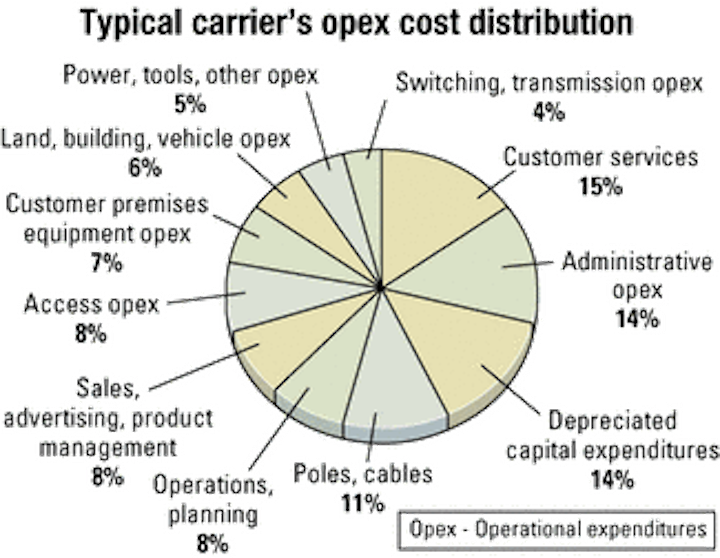 Telecommunications operators that are not committed to cost reduction simply do not exist. In today's competitive environment, cost reduction is a matter of survival. The main focus has typically been on reducing visible capital expenditures (capex). However, 75% of an operator's cost structure is devoted to operational expenditures (opex).

Modeling based on real network data shows that once an operator's service mix stabilizes, the opex of an operator continues to increase over time, while capex decreases. Reducing opex is the most effective way to lower the total cost of ownership of a network. It is, however, a complicated area to address. Unless strategically applied, across the board opex reductions can dramatically impair service quality and impact customer satisfaction.

What can be done to shrink the opex budget of a telecom operator? Introducing optics into a network is a good first step. As emerging optical technologies such as next-generation DWDM are introduced into the transport network, new ways to reduce the operating costs of the network can be achieved.

DWDM proves-in to many networks on a first-cost basis (excluding consideration of opex savings). Once deployed, DWDM has been shown to greatly reduce the cost of turning up new wavelength services by eliminating the need for truck-roll upgrades inherent with legacy networks. Transparent rate-adaptive interface plug-in modules on newer DWDM systems enable their introduction to legacy networks as part of the normal upgrade process. Once installed, these systems reduce the time and manpower to upgrade the capacity and service offerings of an operator's network. 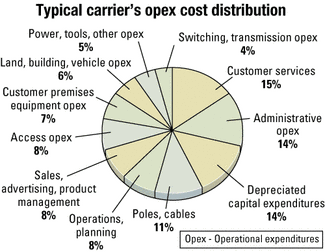 Figure 1. Here's a breakdown of a typical carrier's operating-expense budget.

While specifics vary, a typical operator's spending profile shows that the majority of its total budget is opex. Figure 1 provides a breakdown of a typical carrier budget. Of the opex total, 14% includes the depreciation of capital assets, assuming a depreciation rate of 20% per year over a five-year period.

SANs demonstrate how next-generation DWDM can be used to reduce the opex of a network. There is growing demand for secure and "ultra-high" reliable transport of storage data over distance by enterprises. Enterprises are moving storage or data centers offsite to remote locations for data mirroring and disaster recovery. Additionally, managing the storage network at fewer locations is more cost-effective, and thus many enterprises view the move to SANs as a cost-saving exercise.

SANs tend to display high churn rates and often grow as the enterprise storage requirements change. Another trend is that the virtual storage network is moving from application-specific point-to-point configurations with small volumes of data to multilocation, multivendor, large-volume networks geographically separated for improved resilience.

The dynamic nature of SANs in a legacy network infrastructure results in high opex costs that need to be factored into service prices. As an alternative, operators can provide storage services to targeted enterprises by including DWDM in their network infrastructure. Because DWDM allows new optical services to use the same optical network as the legacy network, such an iterative approach allows operators to accommodate more dynamic services such as SANs while continuing to leverage their existing SONET infrastructure.

The integration of DWDM with SONET framing of native data protocols like Fibre Channel allows an operator to gracefully support storage data transport transparently through the existing network infrastructure. Storage fabric switches can directly interconnect with the next-generation metro DWDM devices using as little as a single transparent rate-adaptive interface.

This same DWDM device uses independent lightwave channels to support the legacy network, independent from the SAN support network. The SAN data signals are transported by the DWDM system at a rate anywhere from 100 Mbits/sec to 1.25 Gbits/sec. These SAN signals are mapped onto a 2.5-Gbit/sec SONET frame structure to be transported transparently over the operator's existing SONET infrastructure (see Figure 2). Services based on Gigabit Ethernet, Fibre Channel, Escon, Ficon, OC-3 (155 Mbits/sec), and OC-12 (622 Mbits/sec) can be managed in a similar fashion.

Figure 2. SAN signals are mapped onto a 2.5-Gbit/sec SONET frame structure for transparent transport over the operator's existing SONET infrastructure.

DWDM allows operators to aggregate multiple client signals or points of interconnection of data centers into a single wavelength, maximizing the use of fiber. Clustering of traffic in early-generation DWDM systems resulted in a reduction in operating costs, but there was also a reduction in network availability.

However, protection schemes in newer DWDM systems ensure a single outage will not disrupt clustered traffic flows, and thus opex savings are now available without a corresponding reduction in network quality. These next-generation DWDM systems provide synchronous transport of all types of bandwidth, including native SAN protocols, with integrated optical protection of that data. That enables bandwidth protection over short distances as well as distances over several hundreds of kilometers.

Modeling can be used to consider the long-term effects of introducing DWDM to an operator's infrastructure. Thirteen key wireline carrier services were modeled to develop a legacy bandwidth profile. Additionally, some non-wireline service demands such as cellular and Internet-service-provider service data is also considered to size the wireline support infrastructure needed to support such off-network services.

Service-demand data generates ingress bandwidth requirements that are driven through a traffic flow model. In the traffic flow model, bandwidth is compressed and switched as it flows through successive network elements (NEs) of various types between source and destination. NEs are distributed between local serving offices, area hub offices, and core-network nodes. Long-term NE demand growth (and long-range capex demands) is driven by usage thresholds established per network element.

Since the current network model focuses on service growth but does not introduce unforeseen network services, capex growth patterns show high initial capex requirements reflecting the high costs associated with the initial network build. Figure 3 shows that over time, however, these costs begin to diminish as the network is built-out.

Figure 3. Over time, capex costs begin to diminish as the network is built-out.

Changes in network bandwidth demand result in additional opex cost factors related to installation costs for bandwidth expansion and network maintenance (both event-triggered maintenance and scheduled preventive maintenance). Figure 4 reveals that unlike capex, which shows highest demands on service introduction and then diminishes, opex peaks on service introduction, settles, then grows with demand (reflecting the increasing cost of labor).

Introducing optical technologies into the network helps operators maintain profitable margins by controlling the cost of operating data-intensive networks. Next-generation DWDM transport simplifies installation and commissioning of future wavelengths while optimizing transmission performance of changing transport networks. As opex increases over time, emerging technologies such as next generation DWDM will be needed as a key tool to reduce the cost of operating and growing a profitable network infrastructure.

Dorothy Bargas is senior manager for optical global solutions and Jerry Power is director of optics market strategy at Alcatel (Plano, TX). They can be reached via the company's Website, www.alcatel.com.