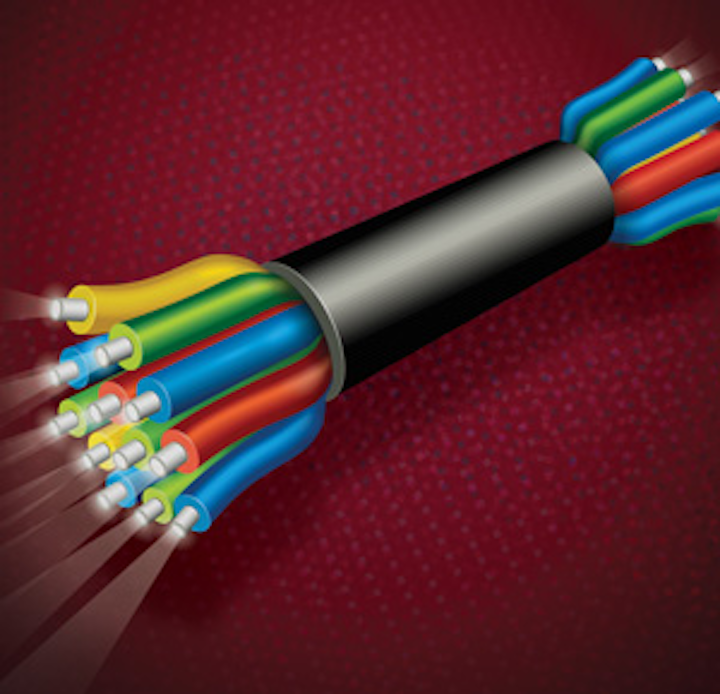 Since singlemode fiber was first introduced in the early 1980s, little has changed in its basic geometric parameters. The core size has remained between 8 and 10 µm, the cladding of the glass has remained at 125 µm, and the coating is still 250 µm. Standardizing these dimensions has greatly improved interoperability and consistency across the optical network.

The case for crowded ducts

In most cases, scaling up the optical-cable design via current practices is the preferred approach. But sometimes this option is not possible because of limited duct space. Most often, ducts are deployed in advance of the optical cable and the dimensions are fixed. In these situations, an operator has two choices: limit the number of fibers deployed for the given link or deploy new microcables with smaller dimensions than traditional cables. These microcables also can provide an economic advantage when existing ducts are subdivided with smaller microducts, which can be used to help avoid the costs of civil works and approval processes with local authorities.

Microcables have evolved to offer twice the density available just a few years ago. A conventional cable using 250-µm coated fiber may be 14 mm in diameter; new designs using 200-µm coated fibers are 9.6 mm. Both cables have 288 fibers, but the new design is 31% smaller.

This evolution of microcables is the result of new design approaches and new materials. Key design modifications include:

New ITU-T G.657 fibers and new optical-fiber coatings have enabled tighter packing densities. Even with the space minimized between the fibers in these compact designs, the optical cables can meet industry-recommended crush requirements as well as low-temperature performance requirements. Because blown cables are now the preferred deployment technique in Europe, fewer strength members need to be incorporated into the cable design. Together, these new advances have enabled the latest generation of smaller microcables.

The net result is a significant improvement in the density of fibers in optical cables. A few years ago, a cable diameter of over 10 mm was required for a 48-fiber cable design. Today, we can place 288 fibers in a cable that's smaller than 10 mm.

These targets are achieved by using 200-µm coated fibers. Simply stated, as we reduce the size of the cable elements, a larger percentage of what remains in the cable is optical fiber. The 200-µm coated fiber cross-sectional area is 46% smaller than that of the 250-µm coated fiber. Thus, with no other changes to the cable design, we can expect the cable dimensions can be reduced simply by reducing the coating thickness. That said, the new product must be both usable and reliable for the product to have any value.

In the current issue of the ISO/IEC 60793-2-50 singlemode fiber specification, 200-µm coated fiber was included as an alternate coating dimension. The IEC working groups for optical fiber and cable reviewed practical data as well as reliability data from several industry experts. Their conclusion was that 200 µm is a reasonable dimension for coated singlemode transmission fiber and should be included in the new standard. Further, reference to this alternate coating dimension is also made in Telcordia GR-20, due to be published soon. With the fiber now standardized, more service providers are seeing value in this product and considering it for their networks.

The 200-µm coated fiber works well in the field with current tools and practices. Conventional stripping tools effectively remove the acrylate coating. Once the coating is removed, the bare fiber has the same 125-µm diameter as 250-µm coated fiber; therefore, cleaving and fusion splicing can be accomplished with the same tools as conventional fiber. Laboratory splice studies show no difference between splicing similar and dissimilar fibers. Average splice losses for various combinations of G.657.A1 fiber using an active-alignment fusion splicer are shown in the Table.

One key difference with 200-µm coated fibers is how they perform in ribbon structures and with multifiber connectors. In both these cases, the coating affects the spacing of the fibers and how they're joined either in the mass fusion splice apparatus or the multifiber connector. Currently, there's no generally accepted solution for use of 200-µm product in multifiber junctions, and thus they're not recommended for these applications.

These 200-µm coated fibers have been used in several field deployments as well as tested in the lab. Practical experiments have shown no issues with deployment of these fibers in the field using current procedures and practices. If a repair is needed, the alternate coating diameter will not affect the ability of the technician to restore the optical link.

One practice that can make cable dimensions even smaller is putting more fibers in a given tube. For example, Figure 1 illustrates that 24 fibers with a 200-µm coating dimension occupy about the same amount of space as 12 conventional fibers. In fact, the packing density is slightly higher in the case of 200-µm coated fibers, but microbending effects can be minimized by using a G.657 fiber with a microbend-resistant coating. Using this scheme, the fiber count for a given cable design can be doubled.

There remains one challenge with this approach, however: Beyond 18 colors, it becomes difficult to distinguish fibers by color alone. Thus a new approach is required for fiber identification. One option is marking fibers. Key requirements are that the marks must be visible both initially and after aging, and the marks must not disappear during standard processing. Figure 2 shows examples of ring-marked fibers.

Long-term reliability is a key concern within optical networks. When building an optical network, the actual cost of cable and passive components represents a relatively small amount of the overall investment (typically less than 20%). The cost of the installation of the optical cable is much more significant and greatly affects the overall deployment budget. The payback on that investment is often greater than 10 years. To make the investment worthwhile, the deployed optical fiber must operate properly for the expected lifetime of the network and support possible future network upgrades.

Optical reliability requires that there's a usable optical signal after the system is deployed and that performance will be maintained for the life of the network. Tests such as long-term aging of optical cables, crush tests, and temperature cycling are used to evaluate long-term optical performance.

Mechanical reliability is a measure of whether the fiber will physically break. Optical fiber is very strong, with an intrinsic strength greater than 500 kpsi, but it can have flaws distributed throughout its length. Methods for estimating the long-term mechanical performance for optical fiber are well documented in ISO/IEC TR 62048 Power Law Reliability. Key parameters that need to be preserved are proof test strength, dynamic fatigue coefficient (n-value), and the tensile strength of the glass both initially and after aging of samples.

Even though optical fiber is strong, the surface of the fiber can be easily damaged by the environment. Therefore, the coating layer and how it adheres to the fiber help ensure that the mechanical integrity of the fiber is preserved. Optical fibers with 125-µm glass and a 250-µm coating have been deployed for more than 30 years. Time has shown that the 62.5-µm acrylate coating layer is sufficient to preserve the fiber in excess of 30 years. Tests have shown that 200-µm coatings will provide similar performance and as a result are being deployed by several service providers.

Considerable advancements in quality have been developed since optical fibers were first deployed more than 30 years ago. For example, the quartz used to fabricate the bulk of the fiber, which originally was natural material, is now a high-purity synthetic material. The quality of the polymers has also improved, providing a significantly better product than that produced three decades ago. Many of the fibers deployed in the 1980s are still in operation today.

With the improvements in materials, reliability tests indicate that 200-µm coated fiber is capable of surviving 30 years in the field as well. In fact, such fiber has shown compliance to the full set of fiber tests in Section 4 of Telcordia GR-20.

Fiber tensile strength has been measured on aged and “unaged” 200-µm coated fiber and is consistently well above 600 kpsi. Perhaps most revealing are the results of 10-m gauge length axial strength tests. Figure 3 clearly shows that the 200-µm coated fiber has high strength when tested under these stringent conditions.

Technicians also tested dynamic fatigue for the 200-µm coated fiber using the more stringent axial strain method. Their data consistently yields nd>20 for both unaged and aged samples. The reliability tests conducted in the lab clearly show that 200-µm coated optical fiber can meet the stringent tests that were developed to ensure 30- year performance in the field.

Singlemode optical fiber is now available with an alternate coating dimension of 200 µm. This smaller coating dimension is compatible with the embedded base of fibers and provides 46% smaller fibers that can be used to reduce the diameter of microcables. These fibers are proving to be a new and reliable solution to the challenge of deploying high-fiber-count optical cables in crowded ducts.