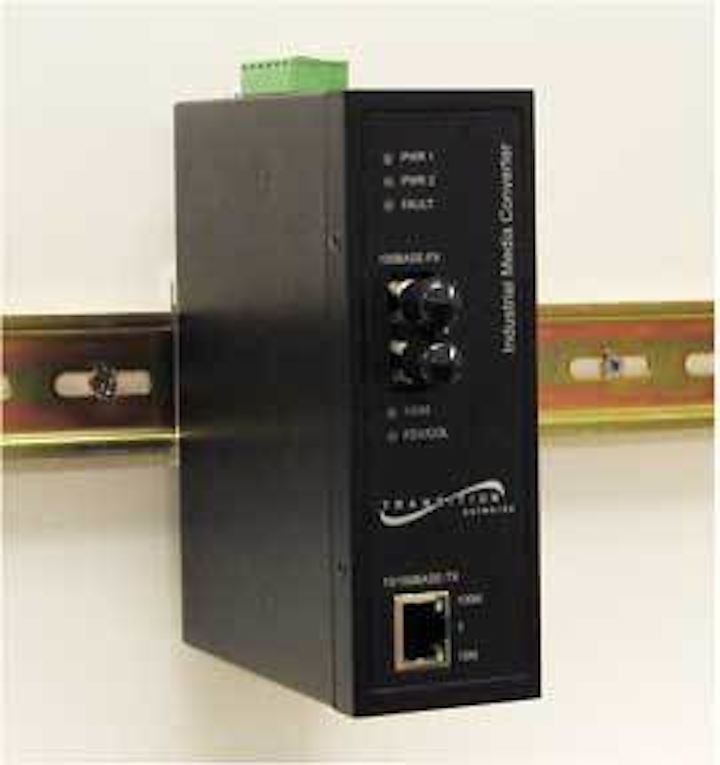 While network managers yearn for the latest equipment and higher speeds, budgetary restrictions impose limitations and precipitate a less than homogenous network. Inevitably, such administrators must contend with a variety of protocols, speeds, and media in their networks. 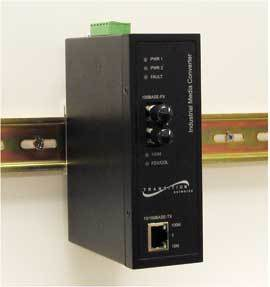 DIN-rail mounting of a media converter.

Those in industrial environments face the added challenge of creating interoperability throughout a network in harsh outdoor and factory floor locations subject to environmental factors that would render standard, office-grade equipment useless. Hardened media converters offer a robust and economically viable way to incorporate fiber-optic cabling into a copper-based industrial networking topology.

For those unfamiliar with conversion technology, media converters connect dissimilar cable types, making it possible to mix media and speed on a network to optimize price and performance. They offer a viable, low-cost way to extend legacy networks with the latest technology or connect inexpensive, lower-bandwidth devices to a fiber-optic backbone.

Media converters are commonly used to connect unshielded twisted pair (UTP) copper cabling to fiber-optic cabling in a network cabling plant. They can be effective in networks that have legacy cabling such as coaxial or twin-axial cabling and need to be integrated with UTP or fiber-optic cabling. They are also used to convert multimode fiber links into singlemode fiber runs to extend distance. Multimode fiber has a distance limitation of 2 km, while singlemode fiber can be used to extend distances up to 125 km.

Media converters are protocol specific and, in their simplest form, maintain the existing protocol while converting from one media type (copper) to another (fiber optic). They support a broad range of protocols and applications, including RS-232, RS-422/485, V.35, X.21, Ethernet, T1, DS3, analog phone lines, video, and more. Converters also come in a variety of form factors, such as standalone, multiport, and modular chassis. Multiple connections as well as multiple protocols can be easily accommodated by a media conversion chassis or in a rack for standalone converters.

In general, conversion technology offers the ability to:

• Add new devices without replacing costly equipment and cabling.
• Extend network distances by adding fiber where and when it is needed.
• Provide a link between media types, transparent to the network.
• Keep pace with growing demand and new technology.
• Integrate high-bandwidth devices into the network. 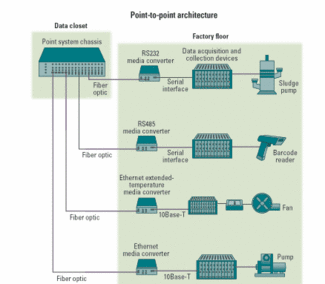 Figure 1. Point-to-point architectures feature direct links from the point system chassis to elements on the factory floor. Media converters enable legacy elements with copper interfaces to connect to the optical interfaces on the point chassis system.

In some cases, networks may have a mix of protocols and require the ability to convert from one protocol to another, such as RS-232 to Ethernet. A number of products exist today, commonly called “serial device servers” or “terminal servers,” that help extend the life of legacy serial devices by integrating them into an upgraded Ethernet network. In addition, devices now exist that provide a full range of switching functions in the Ethernet domain, such as 10/100-Mbit/sec bridging, support for quality of service and virtual LANs, IGMP snooping, redundant path recovery, SNMP management, and OLE for process control (OPC) server interfaces.

Industrial environments can range anywhere from an outdoor, non-temperature-controlled cabinet to an off-shore oil drilling operation or a highly automated automotive assembly plant. While it’s difficult to quantify all of the generic requirements of the myriad industrial environments, networking equipment installed into these applications may be subject to any number of the following common environmental factors:

The presence of these environmental factors, to varying degrees, leads to the necessity of hardened networking devices specifically designed for industrial locations. Common office-grade networking products were never designed to withstand the rigors of these harsh environments; not surprisingly, office-grade products installed in these less-than-ideal conditions face premature failure. Some common attributes of hardened industrial networking equipment may include:

In addition to environmental factors, there is also the issue of which protocols are used in these networking architectures. Most legacy industrial networking environments were designed around proprietary, layered protocols such as Fieldbus, Modbus, Interbus, Profibus, etc., transmitted over serial buses such as RS-232 or RS-485. These protocols are limited in transmission distance and the number of nodes that can be supported on any particular segment. 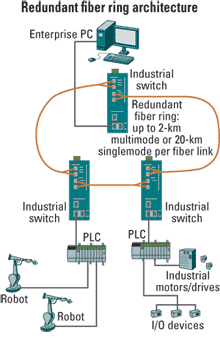 Because most of these protocols are designed by manufacturers to communicate among their own products, many IT professionals have become frustrated when trying to integrate equipment from multiple manufacturers and, thus, a multitude of proprietary protocols. They have begun to push equipment vendors to standardize on an open-architecture protocol, which has led to a recent surge in the use of Ethernet in industrial locations for applications in process control, building automation, traffic control systems, power stations, medical, and wastewater treatment. Conversion technology offers a cost-effective way to transition from these proprietary protocols to an open-architecture model.

Media conversion has been successfully implemented into many industrial networks to convert the electrical signals on copper-based cabling over to optical signals on fiber-optic cabling. In addition to solving mixed-media dilemmas, media converters have also proven to be a cost-effective means of extending the life of legacy equipment by easing the integration of fiber optics into copper-based architectures. 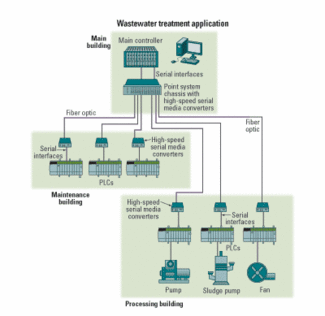 Networking requirements in industrial locations range from simple monitoring and data acquisition to complete remote management of devices interfacing with automated machinery. Some of the more common uses of media converters can be illustrated in the following examples of applications on the factory floor, in a wastewater treatment facility, and an outdoor traffic control network.

Factory floor applications.Some factory environments, as well as power plants and substations, have equipment that may produce significant levels of EMI, which can have adverse effects on data transmitted across copper-based cabling. The use of fiber-optic cabling virtually eliminates any effect EMI may have on data transmission. Media conversion provides a cost-effective way to convert the serial or Ethernet output port on a legacy programmable logic controller (PLC) over to an optical signal to overcome distance-related issues or to help eliminate EMI and RFI.

Standalone media converters and switches can be placed near the PLC, controller, or other equipment and can be wall mounted or DIN-rail mounted. Chassis-based converters can then be used in the data closet, which can be remotely located from the factory floor due to the greater distances afforded by the use of fiber-optic cabling. SNMP management including remote monitoring and alarm notification capability may be incorporated where needed.

Media converters are typically installed into existing networking architectures, which are usually configured in either a point-to-point (see Figure 1) or redundant ring (see Figure 2) configuration.

Wastewater treatment facility application.Many industrial locations have intelligent device monitors and other equipment that needs to be networked together. Media converters can be used at either end of the fiber-optic cable to enable centralized control. For example, a wastewater treatment plant has a processing building, a maintenance building, and a main plant, with each building having legacy PLC stations located throughout. The PLCs have serial interfaces and are connected to a main controller within each building. The wastewater treatment plant wants to migrate to centralized control.

Figure 4. Traffic control applications are one example of outdoor networks that are migrating to fiber optics.

Outdoor traffic control environment.Outdoor applications are primarily concerned with temperature extremes, as elements such as moisture, dust, and debris are minimized with the use of equipment enclosures. Outdoor enclosures are typically not temperature controlled; they are subject to industry standards for performance such as those set by the National Electrical Manufacturers Association (NEMA), Underwriters Laboratories (UL), and the International Electrotechnical Commission (IEC).

An example of an outdoor industrial application is traffic control. Traffic control systems have traditionally used coaxial or serial interfaces for the interconnection of outdoor traffic data devices and the control center. The video codec in this application converts the analog video signal into an Ethernet signal.

Standalone extended-temperature media converters are placed at the remote end, connecting pole-top cameras with copper interfaces to fiber-optic cabling. The fiber can extend the link distance to 125 km (depending on the protocol) using singlemode fiber back to the control center. A managed media converter chassis located in the data closet at the control center accepts the fiber signal, converts it, and connects to the copper switch at the main site.

The hardened industrial networking equipment on the market today is either designed for a specific customer application with little application flexibility or designed with the idea to cover as much of the market as possible with one product-a sort of one-size-fits-all. The best approach to researching, identifying, and selecting potential products is to identify the protocol, data rates, and port interfaces as well as the minimum environmental factors that may affect the installation. In addition, pay close attention to the warranty offered by the manufacturer, as this can be an indication of expected quality. Typical warranty times vary from one to two years, with some manufacturers actually offering a lifetime warranty on their products.

Media converters have evolved from their initial intent of adding one or two fiber strands to a LAN as a quick resolution to overcome the problems posed by mixed media or to address distance limitations. Today, media converters offer an economically viable alternative to purchasing new fiber-based communication equipment. They provide a cost-effective means of extending the life of legacy equipment and easing the integration of fiber optics into copper-based architectures. Media converters are offered in a wide variety of protocols, form factors, and environmental hardening to address the complex needs of the most demanding industrial applications.

Todd Duberstein is a product manager with Transition Networks Inc. (Eden Prairie, MN; www.transition.com). He received a BS degree in manufacturing engineering and has more than 12 years of experience in designing and marketing fiber optics and networking equipment.