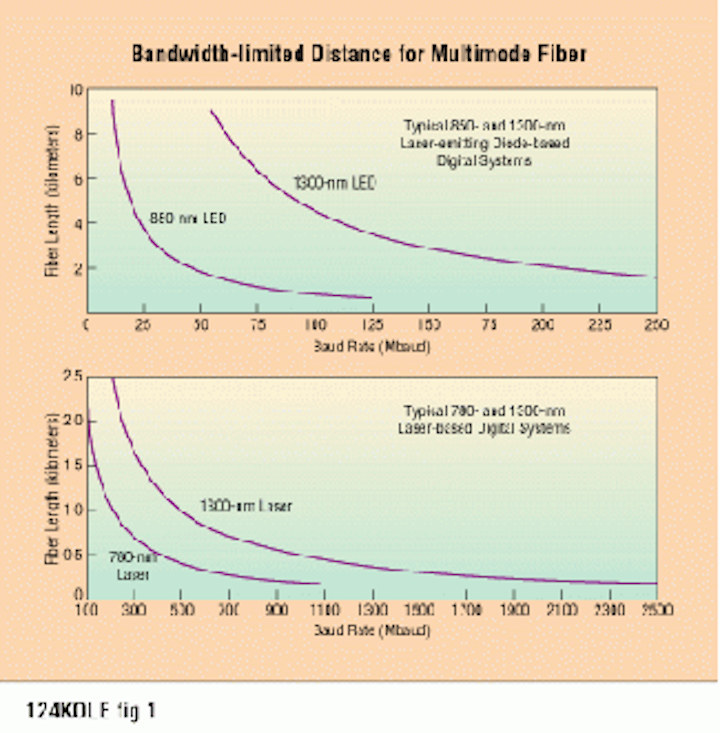 Increasing bandwidth demands of users and the evolution of higher bandwidth applications during the last decade have made fiber the media of choice within the backbone segments of the premises network. Today, most fiber installations within customer premises consist of multimode media, but the bandwidth constraints of multimode media may limit the ability of the network to provide future broadband services.

Loss (attenuation), which diminishes the signal power, and dispersion, which reduces the bandwidth (information capacity), can limit the operating distance of fiber systems. The total loss accumulates from the cables, connectors and splices used in a network link. Bandwidth is affected by the optical transmitter and fiber. For systems operating at greater than 100 megabits per second, bandwidth almost always becomes more restrictive than loss.

Modal dispersion is caused by the path length difference of each optical mode, which results in different propagation times. Standard 62.5/125-micron multimode fiber has a minimum modal bandwidth-distance product of 160 megahertz/kilometer at 850 nm, and 500 MHz-km at 1300 nm.

The bandwidth-distance product rating of a fiber only indicates the effects of modal dispersion because it is measured using narrow spectral width laser transmitters. If the fiber is used to support wide spectral width transmitters, such as light-emitting diodes, then chromatic dispersion can become the dominant bandwidth-limiting effect.

The following rules can be used to help categorize fiber-optic systems according to their transmitter type, baud rate and fiber type:

Fiber LANs operating at less than 50 Mbaud generally use 850-nm LEDs on multimode fiber. However, these devices are available for applications to 155 Mbaud.

Fiber LANs operating between 50 and 250 Mbaud generally use 1300-nm LEDs on multimode fiber. Recently, these devices have been proposed for 622-Mbaud applications.

Systems operating at greater than 250 Mbaud generally use 1300-nm lasers on singlemode fiber.

Recently, 780-nm lasers, developed for compact disk players, are making inroads into all baud-rate applications on both media types.

Plotted operational data curves provide a way to approximate if a TIA/EIA-568-A compliant multimode fiber-optic installation will provide sufficient bandwidth to support an application. These curves apply to the most common systems that use ordinary digital signaling, on a single optical carrier, without wavelength division multiplexing. The transmitter is assumed to excite all optical modes. For example, assume that the transmitter transition-time bandwidth occupies 70% of the operating baud rate. The curves would represent the distance at which the exit bandwidth is reduced to 50% of the operating baud rate. Because of these assumptions, the curves are only approximations.

For most LAN applications, a station or hub inherently acts as a repeater. Some LANs offer a choice of media and transmitter technologies. Multimode-to-singlemode converters may be available for other applications.

Several applications for singlemode fiber in private networks include:

Multimode-to-singlemode converters are generally inserted in the link that is downstream from the multimode transmitter, but may be remotely located as long as the power budget and bandwidth requirement are not exceeded. The converter receives the multimode signal and drives a transmitter capable of launching an optical signal into singlemode fiber.

Converters are available in two basic types: multiprotocol and single protocol. Multiprotocol converters are designed to handle a variety of protocols used by the more common LANs such as 10Base-F, token ring and FDDI. Multiprotocol converters do not retime the signal, and therefore cannot reduce timing jitter. The output merely follows the input signal. On the other hand, single protocol multimode-to-singlemode converters are tailored to only one type of LAN. They often have more functions, such as signal retiming, and generally operate in only one wavelength region.

Placement of multimode and singlemode fiber in the backbone, especially in segments that are difficult or expensive to retrofit with singlemode later, is important. Plotted 1300-nm laser curve rate reveals the following basic guideline: Singlemode fiber should be installed whenever the expected baud rate (in Mbaud) times the span length (in kilometers) between endpoints approaches or exceeds 500.

But, why worry about when to install singlemode? Why not install it everywhere and forget about multimode? Cost is the reason. Multimode systems cost much less than singlemode systems. The manufacturers of opto-electronic equipment utilize LED and short wavelength laser transmitters whenever possible because they are much less expensive than 1300-nm laser transmitters. The larger core size of multimode fiber allows looser tolerances on splice, connector and opto-electronic components, resulting in higher yields and lower costs.

Once the need to install singlemode has been identified, such issues as the number of fibers, the type of cable, cable management, administration, recordkeeping and the use of different connectors and splices need to be addressed.

The number of strands of both multimode and singlemode fibers that should be installed in a backbone segment depends on the present and future applications that must be simultaneously supported by that segment. To determine the amount of fiber to install, take into account the type and number of fibers that each service requires and the number of services that will share the backbone segment. Add up all of the required fibers and add in at least 50% spare capacity of dark fibers to arrive at the minimum suggested fiber count. Increasing the spare fiber count above 50% will further future proof the installation.

Choose a cable design appropriate for the type of installation and run separate cables for multimode and singlemode fibers. Hybrid cable with both multimode and singlemode fibers in one sheath are not recommended. Initially, these cable types may appear attractive. However, in practice, hybrid cable can prove problematic because of the lack of availability and higher cost. Furthermore, difficult fiber-type identification might lead to inappropriate use of splice and connector hardware and unintended interconnection of multimode to singlemode fibers at splice points. Using separate cables helps to identify and segregate the two fiber types, reducing confusion during installation, maintenance and administration.

To improve the management of the fiber system for administration and recordkeeping, route the two fiber types to separate patch panels. The fiber type should be identified by distinctive labeling. Color coding the connectors and couplings (adapters) is recommended. The use of blue for singlemode and beige for multimode connections is consistent with the emerging TIA/EIA-568-A.

Additional color coding on the patch panel is recommended to identify the position of the cable segment within the distribution system hierarchy established by TIA/EIA-568. Color coding labels with instructions are available to create patch panels compliant with TIA/EIA-606 administration standard for the telecommunications infrastructure of commercial buildings.

Up-to-date records of the distribution system are essential for efficient usage of the network. Installation should follow all the labeling and recordkeeping practices of TIA/EIA-606. q

Paul Kolesar is a member of the technical staff at AT&T Network Cable Systems in Middletown, NJ. 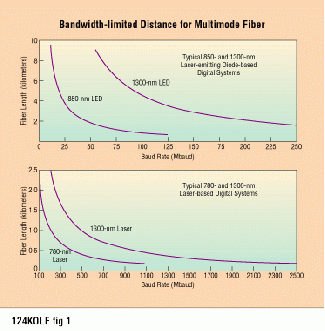 The graphs provide a way to approximate if an EIA/TIA-568-A compliant multimode fiber-optic installation will provide sufficient bandwidth to support an application. These curves apply to the most common systems, which use ordinary digital signaling, on a single optical carrier, without wavelength division multiplexing. The transmitter is assumed to excite all optical modes, and the transmitter transition-time bandwidth is assumed to be 70% of the operating baud rate. The curves represent the distance at which the exit bandwidth is reduced to 50% of the operating baud rate.