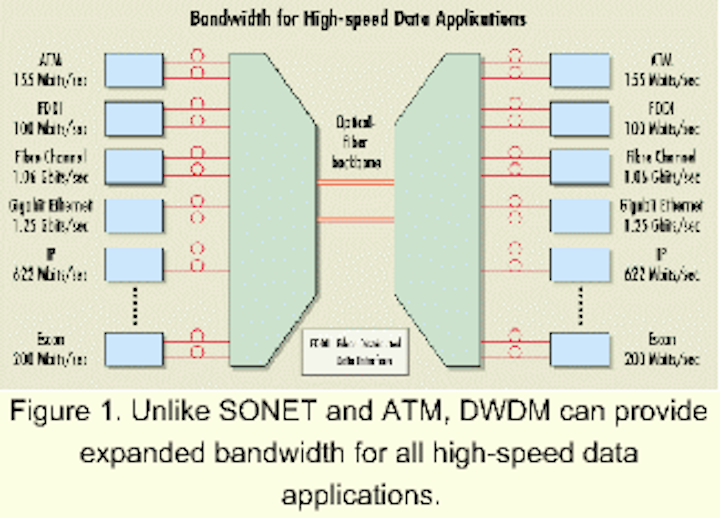 Why would an enterprise adopt wavelength-division multiplexing?
For the same reasons as larger networks.

The migration of WDM to customer-premises networks is the result of several trends: the recent availability of private dark fiber, the rollout of coarse and dense WDM (CWDM and DWDM) equip ment for the enterprise, and the emergence of leased wavelength services from local carriers. It is now possible to lease native gigabit services between metro customer-premises facilities for the price of a T1 (1.554-Mbit/sec) connection.

The first companies to deploy private optical-fiber-based networks between facilities were large financial institutions in the early 1990s. These companies sought high-bandwidth solutions for disaster recovery and such applications as storing data, clustering high-speed computers for parallel processing, handling the facility moves associated with mergers and acquisitions, and implementing multimedia business tools. At the time, local-exchange carriers were pushing existing Synchronous Optical Network (SONET) transport or Asynchronous Transfer Mode (ATM) access services as the best and only transport technologies for metro enterprise networking. 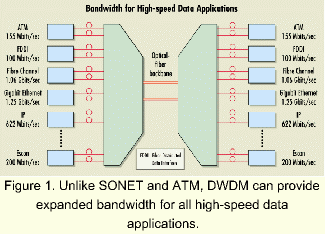 Figure 1. Unlike SONET and ATM, DWDM can provide expanded bandwidth for all high-speed data applications.

SONET and ATM, in fact, are excellent for aggregating multiple low-speed (OC-3/155.52-Mbit/sec) data applications and sites onto a common infrastructure linked out to the wide area network. But enterprises soon found these approaches unsatisfactory for the higher-speed data protocols that network administrators sought to adopt-enterprise system connectivity (Escon), coupling link, Fibre Channel, and Gigabit Ethernet. With SONET, the cost-and reduced performance-of protocol-conversion equipment re quired to convert Gigabit Ethernet (Gbe) and Escon applications, for example, to OC-3 or T3 (44.736-Mbit/sec) links is prohibitive. Moreover, a viable SONET service is not available today for higher-speed protocols such as Fibre Channel and fiber connection (Ficon) at 1.062 Gbits/sec.

In 1996, CWDM and DWDM emerged to enable improved bandwidth performance over private dark fiber. CWDM multiplies the capacity of optical-fiber strands, creating up to eight "virtual channels." DWDM utilizes up to 32 more narrowly spaced channels. Incoming application traffic is converted to specific wavelengths and multiplexed; these multiple channels are then transmitted simultaneously over the same fibers. Performance degradation and specific protocol requirements are not an issue because lightwaves of different lengths do not interfere with one another during transmission and are converted back to their original formats at output.

The arrival of CWDM and DWDM has been a boon to carriers. Originally, WDM and DWDM were deployed in long-haul SONET networks. Today, carriers are focusing on the two technologies to address the explosion of voice, data, and Internet services required by enterprise customers in metro areas.

Enterprises also welcomed the new technologies. For the first time, customer-premises networks could transmit a multitude of disparate data protocols across distances of up to 50 km, simultaneously and at native speeds, without affecting performance (see Figure 1). Moreover, enterprise networks could take advantage of unprecedented scalability. 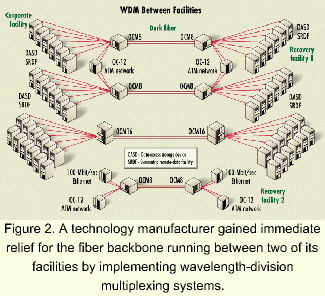 Figure 2. A technology manufacturer gained immediate relief for the fiber backbone running between two of its facilities by implementing wavelength-division multiplexing systems.

WDM recently served as the technology solution for three businesses-a technology manufacturer, a financial-services giant, and a regional power utility. An examination of each company's dilemma, networking goals, and technology solution offers some indication of how WDM is currently being used in enterprise environments.

A Fortune 500 technology manufacturer was seeking relief for the fiber backbone running between two of its facilities. ATM, Fast Ethernet, and Gigabit Ethernet application traffic had exhausted the bandwidth capacity of 24 optical-fiber strands.

The company first considered installing additional fibers. This strategy, however, would not only have been expensive, but securing the necessary regulatory permits to bury and connect additional fiber strands could take perhaps as long as 18 months-a delay the company was unwilling to endure.

Instead, the manufacturer turned to WDM. Additional fiber strands would not have to be installed; only an active optical-networking system was required at each of the two facilities to improve network performance for its 11,000 employees (see Figure 2).

In choosing a WDM system, ease of installation was a primary consideration. Plug-and-play capabilities ensured that the system the manufacturer selected would need minimal labor from the company's 16-person network-support staff. Other systems, originally intended for carrier deployment, would have required complex software configuration during installation.

The WDM system has multiplied available bandwidth by up to 16 times, providing ample support for 25-Tbyte high-speed LAN-application traffic between the enterprise's two sites. Network performance is not negatively affected; all protocols run at their native speeds. In addition, the manufacturer's mission-critical data such as product-development information is continuously mirrored.

No industry has been more eager than finance to put into action the new range of disaster-recovery technologies. Here, millions of dollars in revenue per hour are jeopardized in the event of a data-center failure.

A global financial-services company with more than 50,000 employees worldwide needed to replace a SONET-based infrastructure that linked three data centers within a metropolitan area. The customer sought a more effective disaster-recovery strategy that would not cut into network availability for mission-critical Escon traffic.

As was the case with the technology manufacturer, installing dark fiber was ruled out as too expensive and time consuming. The financial services firm identified DWDM as the best available technology. Because of its ability to create virtual channels, DWDM enables enterprise networks to perform extensive, symmetric remote data-facility (SRDF) protocol disc mirroring. In the event of a data-center failure, the network switches over to the mirrored data automatically and recovers the taped data quickly and cost-effectively. 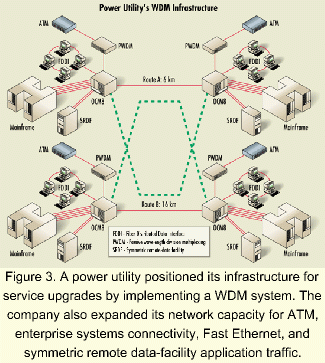 The company deployed DWDM platforms at each of its three data centers. Because the system features a simple network-management protocol (SNMP) module, it is managed and monitored using the network's existing software-management platform.

With DWDM, the financial-services company has uncovered more bandwidth for Escon and other multiprotocol application traffic. Most importantly, the primary goal of establishing an effective disaster-recovery strategy has been met. The company's on-line transaction revenue is safe because data is backed up continuously. In the event of catastrophic failure at any of its three data centers, users would never know the difference; their requests on the network would automatically and seamlessly fail over to an in-service data center.

A U.S. power utility already faced tapped capacity along the 6- and 16-km pairs of 36 optical fibers linking its utilities. Seeking not only expanded capacity for ATM, Escon, Fast Ethernet, and SRDF traffic, the utility was also intent on positioning its infrastructure for future upgrades. If the network administrators at the utility ever decided to implement advanced protocols such as Gigabit Ethernet or Fibre Channel, they did not want to replace modules or configure data-rate changes.

The management team went through the normal progression of decisions. Additional fiber? Too expensive, too long of a delivery time. SONET? Too costly, too many limitations. Once again, WDM was the solution that could deliver protocol independence across existing fiber infrastructures (see Figure 3).

Like many enterprises, the utility could afford to devote only so much floor space for the devices it purchased. Size varied greatly among the vendors. Many of the products with "enterprise" listed among their target applications were initially designed for carrier deployment and, accordingly, too big. Some required separate refrigeration units. The utility settled on a 19-inch rack-mount device with a hot-swappable architecture.

Today, nine fully independent applications are running on the same fiber pair. The performance boost the utility sought has been achieved. Furthermore, a high-speed module on the WDM system supports upgrades from Fast Ethernet to Gigabit Ethernet, Escon to Ficon, or SRDF to Fibre Channel, with no change in hardware. The utility's network can grow flexibly along with its networking needs.

Enterprise users need resources available consistently across a single, seamless interconnection of all the company's facilities. The network must readily accommodate any user changes such as moves, additions, and deletions. Data backups need to occur regularly-in some cases, instantly-and to encompass an enterprise's entire data infrastructure. WDM can deliver these benefits at an attractive price point starting as low as $10,000 per wavelength. WDM, onced viewed exclusively as a transport technology for long-haul networks, has reached the customer premises.